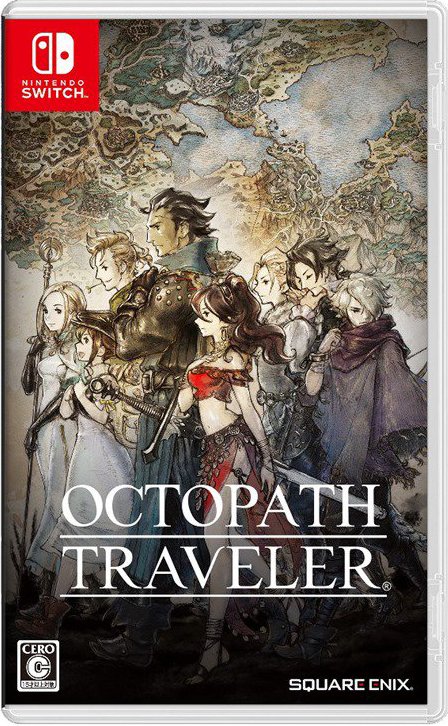 Eight threads, woven together in the tapestry of life. Eight hearts, joined in trajectory, yet not aligned in purpose, until their roads converge into one.

Such is the premise of Octopath Traveler, a retro-styled JRPG that hearkens back to a more adventuresome time in video gaming, when words alone shaped stories out of so much pixelated grist. The eight tales in Octopath Traveler are written, but they are also for players themselves to write; freedom lies in the choices we make along the way. The result is a beautifully nuanced role-playing adventure that strikes a pitch-perfect balance between new and old.

It would be prudent to first address the expectations that have been heaped upon Octopath Traveler since it was revealed to the world. The successor to Final Fantasy it is not; in the pantheon of Square Enix RPGs, Octopath Traveler shares much more DNA with its SaGa cousins. It is in some ways linear—each of its eight character-focused vignettes have a clear beginning, middle, and end—but in many ways not, as it grants the player the power to determine the when, who, and how of its mechanical byways. In this way, every player’s experience with the game is unique, and engenders imaginative role-playing even within its existing narrative.

For example, I picked the warm-hearted apothecary, Alfyn, as my primary character. His story begins with him curing a girl suffering from a deadly snake bite in his backwater village before venturing out into the world in search of his calling as a healer. Once I had finished his introductory chapter, I was free to head directly to his next destination, a seaside town halfway across the world, or to explore other places at my leisure. I chose to hike up into a mountainous region, where I met H’aanit, a huntress in search of her missing mentor. After helping her hunt a monster that posed an immediate threat to her village, the two of us hit the road again, stronger for our new partnership.

This is where the power of imagination takes hold: Sure, Octopath Traveler presents the occasional piece of optional “travel banter” between characters, but by and large, each of its stories stands alone as vignettes of sorts. But in my mind, these people were travelling together, so of course, they experienced more together than the game was explicitly showing me. Maybe my two heroes had a singing contest over mugs of mead—Alfyn’s professed drink of choice—at one of the taverns they stopped at along the way, or perhaps they stayed up late pondering the mysteries of a jötunn at the urging of a scholar they met on the road. Eventually, after visiting a monument to an apothecary of historical significance, H’aanit would begin learning the fundamentals of the healer’s trade herself at Alfyn’s enthusiastic insistence. And still, their adventure had only just begun. Hearing from other players how their own journeys have differed from my own has been a high point of the conversation surrounding Octopath Traveler. It is thanks to a strong foundation of flavourful, well-written text that these sorts of player-conceived stories can flourish.

Yet the text is not the only element of Octopath Traveler that oozes personality; one need only look at a still image of the game to see how it blends 2D and 3D to create a totally unique, stunningly beautiful visual style. It looks even better in motion, with rich lighting and shadows, sparkling particle effects, and vibrant character artwork. Environments have an impressive sense of depth that would never have been possible with the graphical limitations of the 16-bit games that inspired them. Every playable character has a variety of visual permutations depending on their assigned battle class, and enemy sprites are lavishly detailed. Bosses, in particular, stand out as both gorgeous and eerily intimidating due to the disparity in size between friend and foe. Even the most innocuous adversaries muster a powerful presence when they’re quadruple your size on the battlefield.

Battle, a critical component of the RPG experience, is another area where Octopath Traveler excels. It’s something of a lateral iteration of the Bravely Default battle system, where characters can stockpile “boost points” and use them to augment or multiply the effects of their abilities. By default, one boost point is accumulated per turn, and it is generally wise to save them for moments of crisis or opportunity, like when the party is in need of an emergency healing spell or when an enemy’s defenses are down. The latter happens when an enemy’s vulnerabilities are exploited a certain number of times, eventually putting them in a “break” state that leaves them stunned and defenseless. Figuring out each enemy’s weaknesses and capitalizing on them is a crucial part of the game’s battle system, and it makes each encounter into a puzzle where the player benefits from discovering the most efficient path to victory. With a toolset that includes a deceptively simple but robust support job system in the vein of Final Fantasy V, combat is always something to look forward to in Octopath Traveler.

Every moment of the Octopath Traveler experience is better for the presence of composer Yasunori Nishiki’s superlative melodies. A full spectrum of feelings and moods are evoked throughout the music accompanying Octopath‘s intertwining stories: heroism, whimsy, melancholy, mystery…not in quite some time have I fallen so hard for the entirety of a game’s soundtrack. Between its rousing battle themes and flavorful character motifs, I can’t think of a single piece that didn’t meaningfully contribute to Octopath‘s atmosphere. Like Masayoshi Soken before him, Yasunori Nishiki has made a swift and indelible impression as one of Square Enix’s most talented up-and-coming composers.

Having followed Octopath Traveler since its original demo released in 2017, I commend the myriad ways that it has improved for the better in the interim. It feels quicker, cleaner, and more polished than before, with a sensible user interface, convenient fast travel, and a masterfully tuned difficulty curve that takes into account the player’s story progress. Whenever I hit a stumbling block, it was generally a result of my own strategic ineptitude; a few more levels, a smattering of stronger equipment, and a revised party composition was almost always enough to see me through whatever challenge I faced. The game’s sole failing, in my eyes, is a penchant for repetition. Most story chapters consist of the same formula of introductory cutscenes, a straightforward dungeon, and a showdown with a boss. There’s no denying that it’s a lot of the same, but I like all of Octopath Traveler‘s building blocks enough to not be bothered by its structural deficiencies.

No game is perfect, but Octopath Traveler comes close to being perfect for my own tastes. Its characters are wonderfully human. Its world begs to be explored. Its musical score is a wellspring of passion. Every facet of this gem is polished with an artisan’s keen eye. Spectacularly balancing its guided micro-narratives with a wealth of player-defined freedom, Octopath Traveler is a bold risk for an era of increasingly cinematic RPGs. It is a road I am full glad to travel.

Octopath Traveler is a sublime mélange of classic role-playing sensibilities and modern conveniences that speaks to this RPG aficionado's soul.
REVIEW SCORE
9
File Under: Square Enix