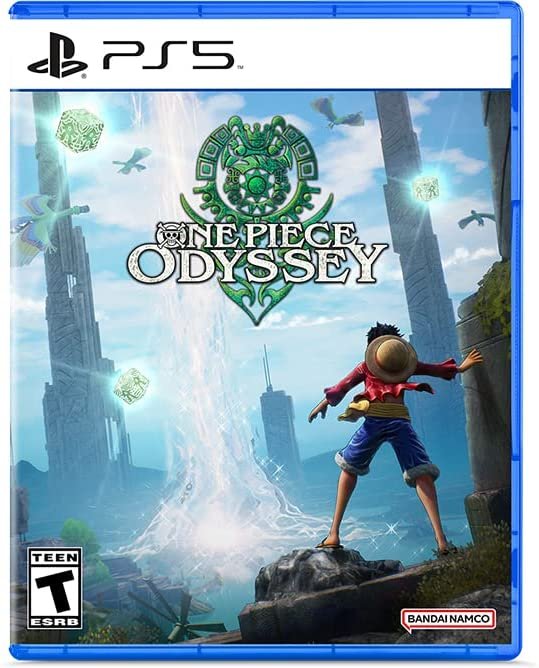 Partway through playing One Piece Odyssey, I began to wonder if being a fan of One Piece made me dislike it more. While I have both read the manga and watched the anime, I prefer the former due to its pacing over the latter’s frequent use of filler and repetition to pad out its runtime. But even the worst instances of filler in the anime pale in comparison to the terrible pacing found in Odyssey, a game that feels like it is wasting your time as you play it.

One Piece Odyssey is a JRPG that follows the Straw Hats as they are stranded on the mystical island of Waford. While investigating the island, the crew soon finds that their abilities and powers have somehow been removed from their bodies and have taken the form of cubes. To get them back, the Straw Hats must partner with Adio and Lim, two original characters created for the game, in order to both uncover the mystery of Waford and get cubes.

Getting the cubes basically involves two things: exploring ruins on the island and delving into memories. One of Lim’s powers enables her to transport people into Memoria, a place composed of people’s memories, in order to gather strength to unlock the power of the cubes. Which means, in One Piece terms, you gain the ability to re-experience several past arcs from the series; Alabasta, Water 7/Enies Lobby, etc. However, the fact that they’re memories means that not all the events that happen in the manga and anime happen exactly as they do here.

The silliness of how characters say the word cube so seriously aside, the story of One Piece Odyssey is OK. Both Lim and Adio are perfectly serviceable characters, but neither really grew on me throughout my time with the game. The charm of the writing relies on the Straw Hats themselves and their interactions with each other rather than the actual plot. But even the charisma of Luffy and the gang fail to overcome the problem which is the game’s pacing.

“Maybe one day there will be a great One Piece video game—but if One Piece Odyssey is any indication, it will be a long time before that happens.”

Simply put, One Piece Odyssey is a slog to play. Very few things feel fast, and the game as a whole feels like an episode of One Piece with way too much inconsequential filler. You will frequently watch a cutscene, walk a few feet forward, and then watch another cutscene, repeating this process with nary a battle to liven things up. The constant loading into and out of cutscenes soon becomes grating due to its sheer frequency.

Simple objectives, such as “Leave the town” take an extremely long time to complete because the game throws inconsequential obstacles that serve little purpose other than to extend the time it takes to actually accomplish anything. And every time something important does happen, either in the story or in gameplay, it is pushed to the side quickly in favour of doing yet another fetch quest.

But the one sequence that highlights the horrible pacing is actually rather simple. In one cutscene, Luffy and Zoro jump away from the crew to rescue someone, and a notification appears stating that the two have left the party. When you return to gameplay, the next objective is maybe 20 feet ahead in a straight line. Walking up to it initiates another cutscene where at the end Luffy and Zoro rejoin the party. This series of events took about three minutes to complete, and I was left wondering why there wasn’t just one cutscene for this entire sequence. This may not sound bothersome in isolation, but imagine this happening multiple times an hour across dozens of hours of gameplay.

Not helping matters is the joyless exploration. Maps are straightforwardly designed, with few interesting puzzles or things to discover that make exploring them worthwhile. You are able to swap between any member of the Straw Hats while out in the field, and each has their own abilities that let them do unique things. Few of these abilities are fun to use, as they have simple applications that don’t offer much reward.

“As a turn-based RPG, One Piece Odyssey differentiates itself by having each battle be composed of several areas.”

Sanji, for instance, can detect special ingredients while exploring. But choosing him means forgoing more useful abilities like Luffy’s grapple, which has more range and utility when exploring, and finding ingredients in the first place doesn’t offer much reward. Same with Nami and her ability to find money – sure money is nice, but do you want to explore an entire map again on the off chance there’s something to pick up?

At least battles pick up the pace, even if it’s not by much. As a turn-based RPG, One Piece Odyssey differentiates itself by having each battle be composed of several areas. Party members and enemies are divided between these areas, and they normally cannot move between them unless every enemy in that area is defeated. Entering an area means you can damage enemies, but it opens you up to getting hit, long-range attacks avoid this problem, but they are not as powerful as close-range attacks.

Furthermore, characters are divided into three types — Power, Speed, and Technique — which functions as a weapon triangle where one type of move deals bonus damage to another type, while being ineffective against the other. Power beats Speed, which beats Technique, which in turn beats Power. And in a smart move, you can swap out party members with reserve characters at any time for no cost. This allows you to create favourable matchups in each fight, though there are times when using an ineffective move is helpful; do you keep Usopp, a Speed character, in a fight against a Power enemy just so you can attack at range without risking harm to another character?

On top of that, there are occasionally Dramatic Scenes that occur in battle that reward you for fulfilling special objectives. For example, Chopper could be surrounded by enemies, and you will have to defeat them all within one turn before a powerful attack hits him. They’re simple in design, but they change the focus on the battle and cause you to have to think carefully about your next steps. Decisions like these are interesting, and when One Piece Odyssey creates fights like this I can almost start to see something good.

“There were even instances where I had to turn on autobattle because One Piece Odyssey wouldn’t progress.”

Almost. Because once again, the pacing ruins it. Characters can be upgraded in three ways. First, levelling up via experience gained through battle. This exclusively raises stats, and it’s hard to see noticeable progression on a level by level basis. Second is gathering cubes to upgrade skills. Cubes for each character can be found while exploring, and each one allows you to improve the damage and power of a single ability if three cubes are spent on it. Much like levelling up, these benefits can be difficult to notice.

The third means of levelling up is through unlocking special cubes that bestow new abilities to use both in and outside of battle. This is an anti-grinding mechanic, and I respect that. But you will go up to 10 hours between these kinds of upgrades. Meaning that you will be using the same abilities again and again for extremely long periods of time without unlocking anything new.

This is particularly notable in the first few chapters, where some characters have barely any abilities to rely on. Robin, for instance, has only two skills she could use throughout all the Alabasta arc. The progression systems make it feel like you’re not improving in a way that makes playing One Piece Odyssey feel good. Before long, I started to rely on the autobattle system just so I didn’t have to repeat the same commands again in fight after fight.

There were even instances where I had to turn on autobattle because One Piece Odyssey wouldn’t progress. One boss fight in particular featured every character unable to attack the boss, with the text “Character is watching” showing up on screen instead. When I switched to autobattle, suddenly every character was capable of doing the exact same moves that I tried to input just seconds before. On another occasion, that process was reversed, and I had to switch to manual control when partway through a battle every character became unable to attack in autobattle.

“One Piece Odyssey does not respect your time.”

Beyond those issues, One Piece Odyssey did not have many technical problems, which is a small thing to be thankful for in the grand scheme of things. The characters look fantastic both in cutscenes and in battle, and while the world isn’t particularly interesting it at least runs at a consistent framerate. It ran so well that I was able to pay plenty of attention to the fact that I had to backtrack across one map twice because items were stolen from me in two separate instances that happened almost back to back.

One Piece Odyssey does not respect your time. It moves at a glacial pace, where you are forced to see inconsequential scenes and complete unimportant objectives that do nothing more than pad out the game’s length. It makes the Straw Hat Pirates boring, reducing their charm to little more than a series of gags. And it turns what would be interesting combat into a bore because its progression system makes it feel as though you’re not improving.

Maybe one day there will be a great One Piece video game—but if One Piece Odyssey is any indication, it will be a long time before that happens.

One Piece Odyssey is a slog to play, with horrendous pacing and progression issues destroying what little good can be found in the story and combat.
REVIEW SCORE
4
Buy On Amazon
File Under: JRPG, One Piece, One Piece Odyssey