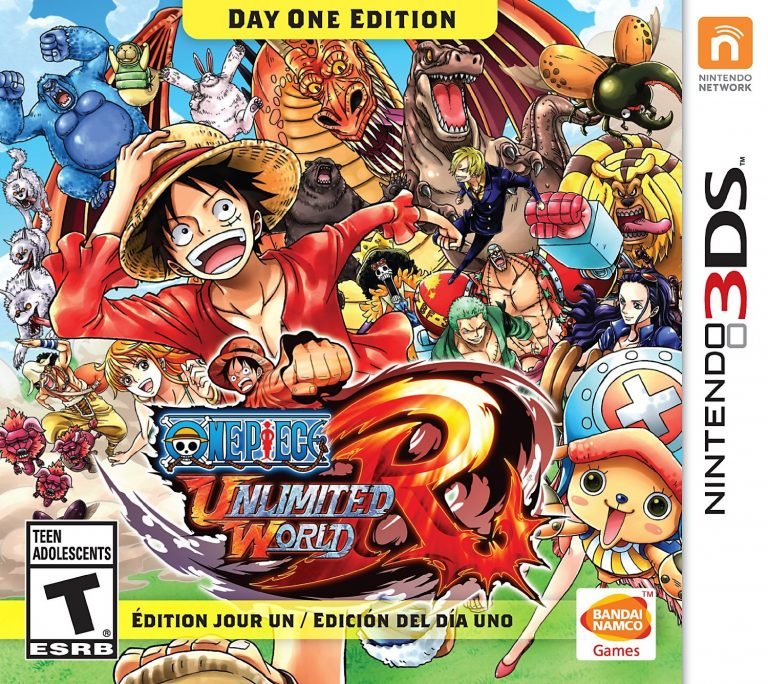 One Piece Unlimited World Red is a game aimed directly at the fans of an anime that I’ve never seen. So I can’t comment on whether or not it accurately represents the series or if it will fill the hearts of the series’ fanboys and fangirls with glee. However, I can comment on the fact that the game is absolutely insane, pretty fun, looks great on 3DS, and makes no sense whatsoever to outsiders. If you’re playing this for story as someone unfamiliar with the franchise, good luck. I can barely describe what it is that I experienced. However, I also can’t deny that I had a good time amidst the colourful confusion. So I suppose that’s something.

As far as what the game is about or what happens, I can assure you that your guess is as good as mine. There seems to be some sort of war going on between a collection of heroes led by a boy in a straw hat and a big boobed girl along with a handful of weirdo sidekicks, like cute talking animals. I think they are pirates. The villains are evil warlords with lackies and they are just as big, broad, and colourful. You can tell they are villains based on their snarling/smiling faces and colour schemes. The plot was doled out through cut scenes and sequences in which single frames of characters communicate through text dialogue. It’s all voiced in a delightfully over-the-top manner by Japanese voice artists with English subtitles. While I can’t pretend to understand what happened in this story that takes place in the middle of a larger narrative that I have no experience with, I always knew what tasks were required of me from moment to moment and more importantly, I always had a good time through sheer sensory overload.

Visually, this is a gorgeous game by the standards of the 3DS. It’s all done through 3D spirit animation that looks like an anime come to life. During cut scenes, the virtual camera spins around characters in the most insane/dramatic ways possible. Simply put, it’s gorgeous on the 3DS. On other systems, it might look a bit old fashioned, but still successful within its desired aesthetic. Now, I must note one rather confusing element. I’m certain that this game would look gorgeous in 3D, but whenever I played it, the 3D on my system turned right off. The box explicitly states that it is 3D compatible, but my system never allowed me to use 3D. Now, I do have a launch release 3DS, so perhaps it only works on newer versions of the system. Regardless, I can’t pretend that I wasn’t disappointed. My eyeballs would have enjoyed the 3D overload that this game could provide.

Gameplay itself is very simple. It’s an action brawler with two attack buttons, a jump button, counter attack options, and a SP bar that builds up for animated super attacks. It’s essentially a button-mashing brawler, but there is a combo system in place if you choose to use it. The story mode involves you choosing a collection of fighters to battle it out against waves of enemies before eventually taking on a big boss man. The challenge level gradually increases, but the game is essentially a one-note mash-em up and some players might get bored. There is a hub village where items can be upgraded and other minor bells and whistles can be explored, but this game is ultimately just a brawler. Thankfully it’s a pretty fun one, filled with insane animations and powers that will satisfy even the shortest of attention spans. In fact, if you want to ditch any semblance of a story entirely, there is Battle Coliseum mode that allows you to fight wave-upon wave of enemies or bosses until you just can’t take it anymore. It’s fun, easy to learn, tough to master, and consistently enjoyable. My only major gripe with gameplay (aside from repetitiveness) is that the inability to control the camera can be a massive pain in the rear and cause a number of accidental deaths. This has been a problem with games since the start of the 3DS, so it shouldn’t be too much of a surprise, but it is definitely a problem worth noting.

I’d never describe One Piece Unlimited World Red as a great game, but in the midst of a slow release summer season it’s a perfectly pleasant time waster. If you’re familiar with this franchise, you might even get something out of the story or the fan-service glee of battling it out with characters that you’re attached to. This element of the game was completely lost on me and I couldn’t describe what happened or who the characters are if I had a gun pointed to my head. However, the simple brawl mechanics are so effective and the graphics/animation is so beautifully insane that it didn’t matter. I had a good time mashing buttons and beating up colourful bad guys until the game was over. Sometimes that’s all you need. This game is no classic, but it is mindless silly fun and that simple goal is more difficult to achieve than it sounds.