A Mobile But Mediocre Port 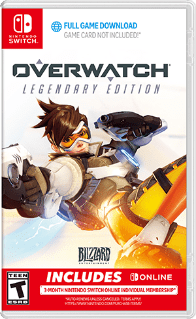 Overwatch on the Nintendo Switch is exactly what you expect it to be, and not one iota more. Yes, it is the same game that one can find on PC, PlayStation 4, or the Xbox One, with its rock-solid controls, ease of use, and multiplayer modes all present and working as intended. If one were to ask ‘Does Overwatch on the Switch function?’ the answer would be ‘Yes’.

Yet the Switch is, without question, the worst way to play it. As good as it is, it pales in comparison to every other version.

This primarily comes down to the number of sacrifices made in order for Overwatch to even work on Nintendo’s console. On the technical side, Blizzard has pared back the quality of the graphics and the frame rate in order to ensure everything functions. It’s a blessing that Overwatch’s art style is as stylized as it is because it still looks decent despite the downgrading of the environment and character models. And rather than run at 60 fps, the Switch version is locked in at 30 fps to keep things stable.

And while the majority of the time the action is presented without any drops, larger team fights are another story. No matter how I played Overwatch, be it docked or in handheld mode, there were noticeable lag spikes and framerate drops when more than five people were involved in a fight. Precision characters became incredibly difficult to use as a result, though my tried and true Reaper was able to come out alright when I switched over due to frustration.

When played in docked mode on a TV, Overwatch is a fine, albeit sub-par version of itself. Looking past the visuals, playing it on the Switch brought me back to the days of playing Overwatch on my PS4 before I switched over to PC. It remains popular for a reason, and it’s well designed and diverse cast of characters still makes for a great time. Blocking off control points as Mei, placing massive shields as Orisa, sniping from afar as Widowmaker — from a gameplay standpoint, the Switch port is solid.

The issues that do arise, however, are not so much fixable as they are integral to playing on the Switch. In terms of controllers, the Pro Controller is the best option if you can use it, as its joysticks feel much better and provide more of a response than those found on the Joy-Cons. They’re the reason why I find that going portable is the weaker option, as I found that the sticks on the Joy-Cons make it more difficult to properly aim.

One of the biggest benefits of playing Overwatch on the Switch — the ability to play it on the go —  is made more difficult by the lack of visual sharpness. It was difficult for me to spot faster-moving opponents in the environments, and I couldn’t always tell if I was properly targeting an enemy or not. This would be easier to look past in a single-player game, but in a competitive multiplayer title, it makes portability the least appealing option.

The single biggest addition is the option for gyroscopic controls. I rarely get motion sickness when playing games, but I had to quickly turn it off due to nausea. Though I am certain others feel differently, I found it too unwieldy to properly use when aiming. This stands in contrast to other shooters that make use of gyroscopic controls and succeed; Splatoon 2 being a prime example. It doesn’t fare well here, which is disappointing but not entirely surprising.

Again, I should reiterate that despite all of my issues with the Switch port, I still enjoyed playing Overwatch on it because it is really hard to muck up such a solid foundation. But the keyword here is ‘despite’. On the PC and other consoles, these issues are nonexistent. There’s also little reason for existing players to make the jump to the Switch, as cross-progression is not currently implemented.

If you have never played Overwatch before, I can imagine you’ll find plenty to love about its Switch port. But I strongly recommend playing any other version instead, as the flaws will become all too clear sooner rather than later on the Switch.

Overwatch on the Nintendo Switch is exactly what it sounds like - a passable port for a videogame that is best played elsewhere.
REVIEW SCORE
6.5
File Under: Activision Blizzard, Overwatch