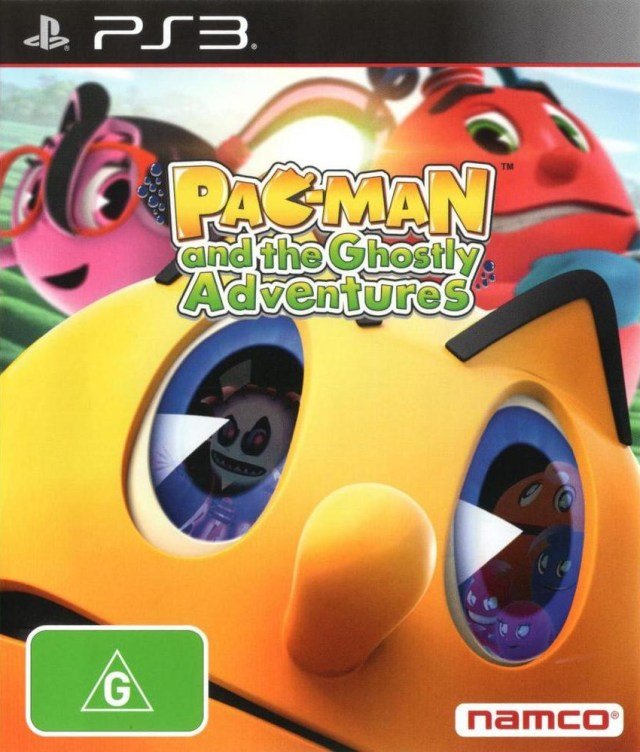 People so far haven’t had much to go on when trying to describe Pac-Man’s personality – yes, people do have these conversations. The famous yellow sprite frequently eats his poltergeist neighbours, enjoys munching on cherries, and chomps on gold orbs when nothing else is available. This is common knowledge. However would you be surprised if someone claimed he’s an irritating high-school kid who also has the ability to shoot fireballs from his hands? It’s understandable if you weren’t expecting that description, but after a few hours with Pac-Man and the Ghostly Adventures it’s what you walk away with.

The generic 3D platformer unflatteringly introduces you to the world of Pacopolis. Characters quickly make the assumption that whoever’s playing the game is deaf and dumb. The dry exposition is delivered with no subtlety whatsoever, and Pac-Man frequently spews horrendous one-liners that serve no purpose other than reminding you to turn the volume down. The primary goal is to close the gate leading to the ghost-infested Netherworld, but you’ll soon stop caring. Interestingly enough, Pink, Blinky, Inky, and Clyde – the classic ghosts from the original Pac-Man game – roam the halls of the school which serves as a hub in between missions. Rather than eating them like you’d expect you simply talk to them, and they have nothing interesting to say.

If you manage to make it through the initial shock of seeing Pac-Man befriend his former enemies, the game actually becomes slightly entertaining. The core gameplay involves chomping on colourful ghosts in a world that you can look at but not explore, and it’s enhanced with the inclusion of special power pellets Pac-Man gobbles up throughout each stage. These power-ups grant our main hero with a variety of abilities. At times they turn him into a chameleon, allowing him to swing across areas with a long tongue, other times they transform him into a wrecking ball, demolishing any ghost unfortunate enough to get in the way. As you dart from one forgetful objective to another, Ghostly Adventures does a fair job of keeping you on your toes. A variety of enemies consistently get in your way, providing you with plenty of opportunities to satisfy Pac-Man’s hunger. The game’s colourful presentation complements what’s happening on the screen, and the impressive sound effects help keep you somewhat engaged in your on-going hunt for ghosts.

Platforming sequences are easily the best part of the game. Hopping across vanishing platforms quickly escalates to freezing water fountains so you can advance to previously out-of-reach areas. These generic sequences are somewhat enjoyable despite the fact you’ve seen them before, and it’s amusing watching Pac-Man devour the cherries and lemons at the end of each level. During these brief celebration moments, which also showcase his burping skills, you can even see the eyes of the ghosts he’s eaten while he belches, gross.

The multiplayer offers very little. The four-player mode tosses players into the classic labyrinth, and puts you in control of one of the ghosts, while a computer-controlled Pac-Man roams the maze doing what he does best. During your frantic search for the orb-consuming beast, he occasionally nabs a power-pellet, quickly turning the tables on you as you’re forced to retreat in fear. If you get caught, he eats you whole and leaves your eyes to float back to the ghosts’ tiny hideout. It’s a bit of mindless fun, but ultimately fails to provide any incentive to play more than a few rounds, and the lack of any online mulitplayer component is a bit of a letdown.

Pac-Man and the Ghostly Adventures is a brief and boring platformer. The abundance of terrible dialogue and uninspired multiplayer overshadow the few moments of platforming and ghost-chomping fun. Stick with the classic Pac-Man game, there’s nothing wrong with that one.

It’s understandable if you weren’t expecting that description, but after a few hours with Pac-Man and the Ghostly Adventures it’s what you walk away with.
REVIEW SCORE
5
File Under: Pac-Man, Platformer, Xbox