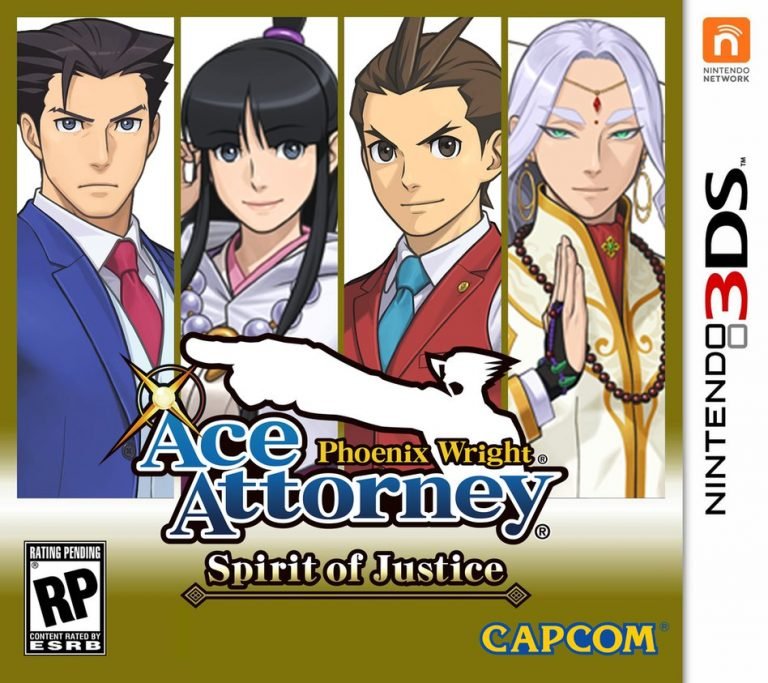 For about a decade, the Ace Attorney franchise has kept me enthralled. Circus murders, coffee-addicted cyborg attorneys, magicians with “magic panty tricks” – I’ve always loved the weird, wacky, and ultimately wonderful world of this series. That’s why Dual Destinies, the 2013 entry, stung so hard. It was a mediocre letdown of a game, half entertaining, half unhinged trainwreck. With series creator Shu Takumi out of the picture, I feared Phoenix Wright: Ace Attorney – Spirit of Justice would be the same story. That is to say, a further running of this formerly stellar series into the ground.

Spirit of Justice still suffers from a lack of Takumi’s deft hand, it’s a notable improvement over the last game, and a step in the right direction. That right direction is the writers’ willingness to forge their own path. Dual Destinies floundered because it did absolutely nothing significant with the overall narrative, instead content to pussyfoot around making significant alterations to series as a whole. There was no risk, and by consequence, no reward.

Not so with Spirit of Justice. Whether you like it or not, the game ultimately veers off in its own direction. I think this is what makes it stronger than the last title. Phoenix finds himself in the Kingdom of Kura’in, which is basically Tibet. But no sooner does he arrive than does he get thrown into a courtroom, where he has to defend his tour guide from being executed. Things spiral out of control from there, as he gets caught up in a “legal revolution” that seeks to overthrow the current regime in favor of a more legal system. Meanwhile, Apollo and Athena get involved in courtroom antics in “Japanifornia,” until they’re eventually dragged into the revolution as well. Past secrets get revealed, friends become rivals, etc. Basically, it’s another lovable Ace Attorney melodrama.

Every case ratchets up the absurdity to a million. A magic show gone awry, a masked superhero cum goddess taking out rebel insurgents, a comedian murdered with noodles … it’s all crazy, and in all the right ways. While I personally felt the fourth case was an extraneous and perfunctory waste of space, it was still enjoyable and gave fledgling character Athena something entertaining to do. Unlike Dual Destinies, there are no bad cases here, just slightly less vital ones.  On the opposite end of the spectrum, I genuinely felt like the third and fifth cases were some of the series’ best. They tied together every element of the narrative in major ways, while also adding vital new canon information that made my jaw literally drop.

But because Shu Takumi isn’t on board, not everything fits neatly into place. My major misgiving about the narrative is the prosecutor. Nahyuta Sahdmahdi is, frankly, a pretty dull antagonist, and maybe even the most “meh” in the series. He feels like an artificially “evil” sort of guy, who’s boringly enigmatic and pointlessly rude, and whose personality shifts on a dime. Some late game revelations partially redeem him, sure. But in a series that’s given us Edgeworth, Godot, and the especially dynamite Franziska von Karma, he just falls flat. He actually makes me appreciate the absurdly edgy Blackquill (who makes a stellar return here,) which is saying something.

Another place where the title falls flat are its mechanics. Namely, there are too many of them. Investigations, forensics, séances (which let you see a victim’s last moments of life,) video viewing, miscellaneous puzzles… there is an unneeded glut of things to do. That’s on top of every protagonist’s special abilities making a return. Ace Attorney has always excelled at mechanical simplicity, prioritizing narrative and “find the hidden object” over gimmicks. But gimmicks are in full swing here, and the result is sort of messy. While breaking Psych Locks and finding hidden “tells” on people are still fun, dusting for prints and comparing video footage against each other are tedious slogs. It’s half fun, half irritating, and all-around sort of unnecessary for what should basically amount to a visual novel.

Still, despite my complaints, 30-ish hours with Spirit of Justice was rewarded with one of my personal favorite titles in the franchise. The strength of the overarching narrative carries it through the dull bits, and the one-off cases were like fun side-stories as opposed to obnoxious time-wasters. A lukewarm prosecutor and mechanical overload don’t distract from this being one of the franchise’s prouder moments. Even the most cynical souls will see the clear improvement over Dual Destinies, in terms of both narrative and visual fidelity. Furthermore, it’s a rarity for me to thoroughly enjoy every case in an Ace Attorney game, but I definitely did here.

Phoenix Wright: Ace Attorney – Spirit of Justice isn’t a perfect game, or even one for people who don’t like this sort of thing. But let’s face it, none of the other games are either (with the possible exception of Professor Layton vs. Phoenix Wright.) For the rest of us, however, and for me? No objections here, because this series has gotten a welcome return to form.

Phoenix Wright: Ace Attorney – Spirit of Justice has some flaws in its testimony, but it’s ultimately a winning entry in the prolific series, and a welcome return to form. No objections here.
REVIEW SCORE
8
File Under: Ace Attorney, Capcom