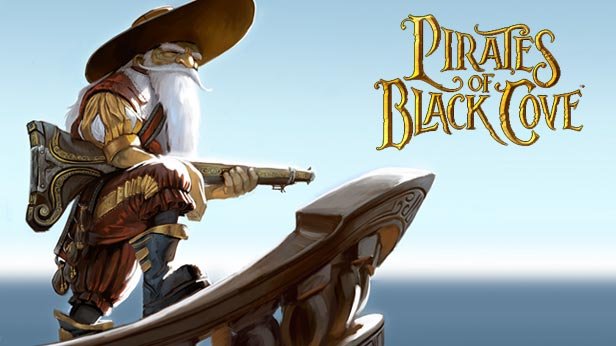 Arrgh mateys, have ye grown board with life on the lan? Well then set sail for the Caribbean and pirate days of yore in Pirates of Black Cove.

Pirates of Black Cove is a blend of two familiar genres mixed with a healthy dose of salty seawater from the scallywags at Paradox Interactive. You play as one of three pirates in quest for plunder and the title of Pirate King. There are all sorts of mysteries for you to explore, and several missions to undertake as you try to become the saltiest scallywag in all the seven seas.

Pirates of Black Cove provides and excellent mix of adventuring and strategy. You’ll find yourself sailing around the Caribbean while collecting items and trading cannon fire with various other ships. Additionally, once you decide to enter a port the gameplay changes almost completely. Entering a port allows you to take control of your captain and his crew of soldiers. Soldiers are recruited from Pirate strongholds and feature various abilities that will aid you on your adventure. The items found on the open sea can be used by “The Mad Alchemist” to make useful items like “Wind in a bottle” or heath replenishing “Grog”.

The gameplay is interesting enough and the missions are decently varied but I found the sailing to be a bit on the slow side. The pace picks up once you engage another ship in combat. With the cannon balls flying these battles can become quite frantic and fun. I also really enjoyed the art. All the loading screens and character portraits are hand drawn and look amazing. While sailing, ships looked a little on then blurry side but the landscapes and water look great. The writing is snappy and full of pirate jokes and nautical puns. It’s not as snappy the classic pirating tale The Secret of Monkey Island but it is still clever enough to provide some chuckles.

I did have a few issues while playing this game. At first I couldn’t play for more than an hour or two without it crashing, I then managed to fix this by downloading two patches and updating my ATI display drivers. After that small challenge it was pretty much clear sailing. The music was cheerful and light, which I enjoyed, but since there are only two tracks played while on the open sea it wears on you like a bad case of scurvy after a while. There also appeared to be this strange bug that would cause the game to freeze when ever a song was loaded. Every five or six minutes the game would freeze for about two or three seconds. After the game resumed a song would begin to play. Since this loading issue only seemed to present itself while on the world map and never at a crucial moment in battle, I found it to be a rather small nuisance. Yes, I would like it fixed, but this small bug hardly ruined my experience.

All things considered, Pirates of Black Cove is fine piece o’ seafarin’ software. I really enjoyed how the game takes the act of pirating seriously but not itself. This allows for the fun of being a pirate to be framed by decently chuckle worthy dialogue and stories. Above all else I really think the best part of Pirates of Black Cove is the art. It’s unique, colorful, and really adds a sense of whimsy to the overall game. If you start to feel the captain’s itch and find yourself longing for the sea, then try the Pirates of Black Cove. I find it to be a bright shiny doubloon resting atop Paradox Interactive massive pirate hoard of PC games.

I really enjoyed how the game takes the act of pirating seriously but not itself.
REVIEW SCORE
8
File Under: Fantasy, PC, Strategy