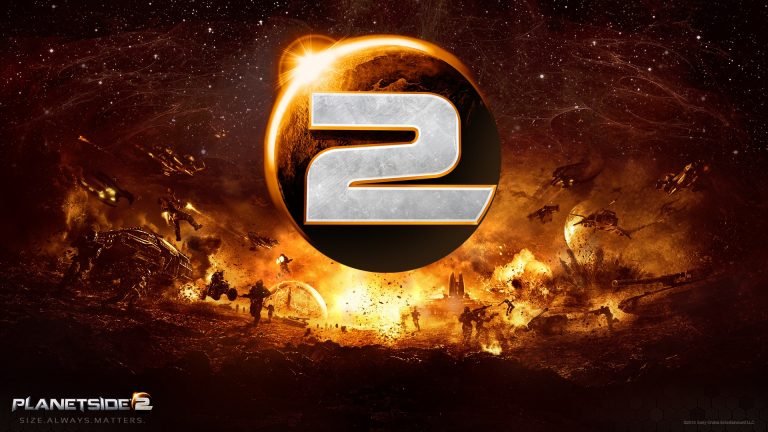 In one sense, it’s pointless to write a review of Planetside 2 because there’s one school of thought that says reviews offer guidance to readers as to whether this product is worth your hard earned cash. Planetside 2 is free to play, so there is no cash involved. What becomes important then, is the question “Is this game worth your time?” And the answer to that, especially when compared to other MMOs and how they have approached the free to play model, is “Yes.” This isn’t the greatest competitive, multiplayer game in the world, but at the cost of free, with relatively few restraints on the player, it’s a pretty good one.

Pick A Side, Any Side

The story of Planetside 2 comes from none other than comic veteran Marv Wolfman, who also penned SOE’s other free to play MMO, DC Universe Online. The lore of the game centers around the planet Auraxis and three factions fighting for control of the various regions. The old Terran Republic struggles to maintain its control against upstart rebels the New Conglomerate, while everyone wonders what the mysterious Vanu Sovereignty is up to, and why they have access to alien technology. You pick one of these three factions, and get into the fight in a tug of war for territory that constantly redraws the borders of ownership.

Sound is, as to be expected from any kind of FPS, quite effective. There’s not a ton of music, something that is mostly welcome in a competitive, multiplayer FPS so the bulk of the audio is taken up by sound effects. If you have a decent surround set up for your PC, or are playing with quality headphones, you’ll appreciate the amount of work SOE has put into the audio for this game. Each faction gets their own entire dedicated soundtrack when music does occasionally play, and the game takes full advantage of an audio set up with and its surround speakers if they have any. The audio effects are comprehensive and full of little details, so all in all it’s an impressive job.

The War That Never Ends

In some ways, the best way to describe Planetside 2 is “MAG except that it actually works.” Massive Action Game for the PS3 was originally conceived as a giant, FPS that entertained thousands of players simultaneously in an ongoing campaign that rewarded skill and dedication. Numerous technical hitches and an awkward implementation of large scale battles are what ultimately skewered MAG from big commercial success, but Planetside 2 nimbly avoids these pitfalls and presents a game that’s largely ready to go from day one.

The first and most important thing to get out of the way at the start is that the playstyle of this game is closer to Battlefield than it is to Call of Duty. Veterans of the corridor kill who rely more on spray and pray tactics than measured strategy will probably get very angry with this game inside of 30 minutes, call everyone else “cheaters” and log off never to return. For people that like to plan, work in teams, employ numerous tools and vehicles with intelligence and perhaps a little sadism, this game is going to bring a smile to your face.

Once you get over the hump of learning the intricacies of the game, the possibilities for fun open up to you. The basic premise is that this is a massively multiplayer online first person shooter. When you log in, you are part of an army that is fighting for control across three continents. The more territory your faction controls, the more benefits you get in the form of special bonuses for skills and/or equipment, as well as more resources with which to purchase equipment. As with Battlefield 3 this isn’t simply about being an infantry soldier with a gun, you have the ability to purchase and use vehicles which range from zippy little ATVs to tanks, to aerial combat interceptors and even flying troop transports.

All of these wonderful toys are made possible through the acquisition of resources, something that is automatically deployed to players every five minutes. The amount of resources you get is in proportion to the amount of territory you control, and whether those resources are actually making it through an established supply line.

The factions feel balanced, although each one has distinct units and characteristics that behave differently, and there’s an immediate, frenzied feeling to the proceedings that you’re in the middle of a just barely organized war that could fly off the rails at any moment. You can choose to fight offensively, joining conflicts to seize territory away from the enemy, or play defensively, fighting off the hordes that mean to take your base away from you. Supply lines have to be maintained, since resource and bonus distribution is directly tied to whether those territories have a line of access to the “warp gates” that act as central arrival/departure hubs for all areas. A smart enemy can deny you resources simply by cutting one area that would adjoin a valuable base to your supply line, then sit back with a tank ambush waiting for the recon force to show.

And that is the real beauty of Planetside 2. The experiences you will have, both daring to the point of lunacy, and foolish to the point of hilarity. Some battles will be tense, serious affairs with a show of great tactics and an intelligent use of combined arms. Other times, a newbie will show up in his first tank, and inadvertently run over his own teammates, helping the enemy to hold onto their base. This is a war that keeps going, even when you log off and go to bed, and when you come back in the next day, you’ll see how the battle lines have changed as a direct result of the actions of your allies and enemies.

On the whole, Planetside 2 is an absolutely amazing deal at the cost of zero dollars. Even at this early junction it feels far less buggy than most MMOs at launch, and is already an endless font of virtual war stories. You can play this game as a lone wolf, and enjoy combat for its own sake, but the game’s real stakes reveal themselves when you join a squad and truly feel like part of a war effort. This is a game surprising in its depth and addicting in its gameplay. If you have a PC and enjoy FPS games that encourage team work and strategy, you really have no excuse to ignore Planetside 2. It literally costs you nothing to play except time.

Wayne has even more to say about Planetside 2! Look for his full review in the next issue of Comics and Gaming Magazine, out December 18th.

On the whole, Planetside 2 is an absolutely amazing deal at the cost of zero dollars. Even at this early junction it feels far less buggy than most MMOs at launch, and is already an endless font of virtual war stories.
REVIEW SCORE
9
File Under: FPS, Free To Play, MMO, PC, Sony