The Joy of Potions 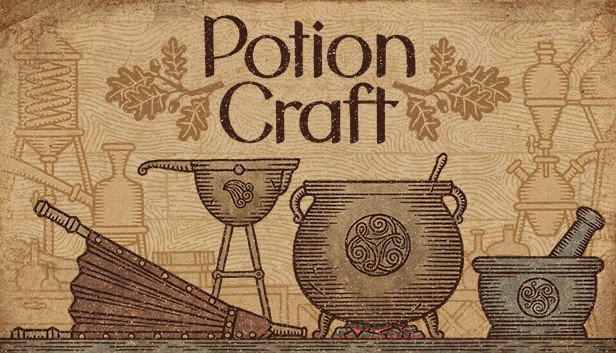 Welp, it’s official, I’ve become CGM’s weird potion guy. I’m not really sure when it happened—one day I was sitting in a room surrounded by videogames and Super Mario plushies, and the next it was all strange mushrooms and herbs, various vials and bottles, and cauldrons the likes of which have never been seen. I kid of course, but you’d genuinely think so with the amount of potion-related games I’ve reviewed in the span of a few months.

The newest brew comes published from tinybuild games—who have been pretty consistent with putting their stamp of approval on quality products—and after Tinykin, I was ready to fall in love again. Potion Craft: Alchemy Simulator is a solid new offering that perfectly blends simplistic simulator elements with a fresh batch of innovation.

Potion Craft: Alchemist Simulator actually reminds me a lot of Potionomics, having a few of the same basic core mechanics. However, where Potion Craft differentiates itself is in the simplicity and style of its gameplay. The game isn’t very big on story—you’re a fledgling Alchemist who happens upon an abandoned shack that may have been inhabited by a wizard since it’s perfect for the practice of potion-craft. You decide to set up shop and begin mixing and selling all kinds of helpful brews to the townsfolk.

The brewing of potions is a genuinely unique and engaging mechanic—one that hasn’t enchanted me so much since Potion Permit. In order to create potions, you need to navigate a map and move your potion cursor toward the various different potions. Different ingredients have different directional paths, so players will need to think carefully about the best way to get to a certain recipe while using as few materials as possible. Furthermore, there are spots on the map that can cause the potion to fail, so navigating effectively is tantamount to success.

Potion Craft is a bit more engaging than Potion Permit or Potionomics, as players can choose to drop ingredients in their mort & pestle to extend the distance they provide (and reduce ingredient requirements), stirring the pot will cause the potion to travel along its path, players can add water to have their potion return in a fixed direction back to the start, and to complete the potion players must use their fire bellows to get the cauldron bubbling.

It’s so simple, yet it constantly keeps the player engaged, and, despite its simple gameplay and overall design, it never feels boring. It’s a unique approach to potion brewing that gives the game a bit of a puzzle feel—consistently prompting players to explore further in the book, and hoping to acquire new materials.

But there isn’t just the crafting of potions in Potion Craft, players will need to sell them as well to the local townspeople and adventures. Selling is pretty simple—people come in with either specific potion requests or with various ailments or issues that will require the player to do a bit of guesswork. Once you have the right potion, you can either choose to sell the potion or haggle for a better price. Unlike Potionomics, haggling is a bit more simplistic, as players can choose from different difficulties, and participate in a small reflex minigame.

There’s also an interesting social element to selling potions, as your store has both a popularity level and a reputation. If you brew good potions and meet customer requests, you’ll increase your popularity, but if you choose to sell potions to people with nefarious intent, it could lower your reputation, changing your clientele to villains and assassins. It adds a bit of a Papers, Please flair to the game, as who you choose to sell to can give you a totally different experience, and change what kind of potions you specialize in.

Also, special mention needs to be given to the amount of customizability your potions, specifically, can have. Potions can be placed all around on your shop table or alchemy station desk, each potion can be given a name and a description, and players can change the bottle, label and icon allowing for a lot of fun and humour to be had.

Visually, Potion Craft: Alchemist Simulator has a fun 16th-century painted style that suits the game nicely. Its simple aesthetic matches the game perfectly—only taking place across four still screens. Where the game really suffers in the audio department. Simply put, the game has one song that repeats on an endless loop. While it’s not a bad song per se, it just gets very old, very fast. This is what I would call a “podcast game.” Just turn off the music, slap on a good podcast, and get lost in the fun of potion-making.

Potion Craft: Alchemist Simulator is a game I really didn’t think I’d get as involved with as I did. It’s a genuinely engaging, enjoyable, and interesting game about making potions that does a lot with a little. If you’re a fan of unique puzzle-style games and are looking to discover the joy of potions as I have, this is certainly worth a look!