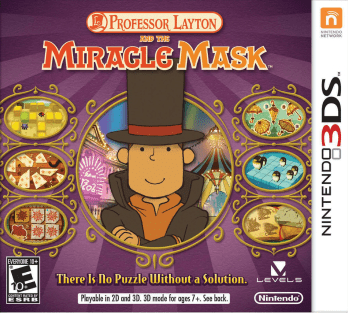 The Professor Layton series has already carved out a place in handheld gaming as one of the premiere puzzle solving franchises, so the series debuting on 3DS is something special for fans of the genre. Well, I’ve got some good news for those folks who like to give their brain a tickle while doing their gaming. Professor Layton And The Miracle Mask captures everything that devoted fans have come to love about the series with a 3DS-flavoured upgrade to the visuals that make it a worthwhile experience on the new system. The designers whipped up a gorgeous new animation style that takes full advantage of the increased horsepower and eye-tingling 3D of the new system, while still keeping the gameplay routed in the puzzle solving that made the franchise so successful in the first place. This is how you upgrade a game series for a next gen console, taking advantage of new bells and whistles while staying true to the core. For all the pretty new 3D cut scenes, Miracle Mask is still based in a world where all problems can be solved by with a puzzle…sigh…if only the real world could be that way. Being able to get out of beating by picking out a hidden ball in a cup is something we’d all be able to benefit from (well, aside from those administering the beatings anyways.)

The first thing you’ll notice when taking the game for a spin is the visual upgrade that Level-5 lavished onto this project. The anime influenced art style remains, but now the characters have been given 3D models that pop out of the background in an appealing way. The 3D never feels forced, it and adds an extra flavor to an old formula that is quite welcome. Once again Professor Layton has been plopped into a conspiracy that only he (and his trusty kid sidekicks Luke and Emmy) can fix through rigorous puzzle-solving. The trio has been invited to the mysterious town Monte d’Or in the middle of a dessert. It’s a tourist destination with shops, a fair, clowns, and costumed characters, but there is the unfortunate presence of a masked megalomaniac causing trouble and our plucky young heroes are going to have to stop him. You’d think the bad guy might have learned by reputation that puzzles are no way to stop Layton and co., but he uses that as his means of stopping them anyways. You can probably guess where things go from there. The story can be a little slow going at first, but once the setting and gameplay parameters are in place it really takes off, offering a charming adventure filled with eccentric characters. Granted it’s not a deep story you’ll be telling around campfires anytime soon and the dialogue is pretty bland, but for a puzzle game, it offers some very entertaining linking material.

And oh the puzzles you’ll solve. The game features over 100 puzzles along the way, forcing gamers to do everything from untangling balloons, to helping a lost child find her mother, building toy robots, and moving around penguins. There’s a nice variance in the puzzles throughout and they gradually build up in difficulty for any player sampling the franchise or genre for the first time. I’d imagine that experienced players might be a little bored by the early puzzles, but fear not! There are some definite head-scratchers to keep you frustrated and elated for hours on end. In addition to working through these puzzles and completing the plot, Level-5 also thrown in some mini-games involving such activities as moving a robot around a gameboard, selling items in a shop, and playing with a big ol’ fluffy rabbit. There are hours upon hours of gameplay options here as well as hundreds of hidden hint coins and dozens of secret items for completists. And if somehow all that just doesn’t offer enough time wasting for you, then Nintendo has gone ahead and promised to release a new daily downloadable puzzle for the game every day for a year. Yeppers, it’s a game that just keeps on giving and a perfect life suck for those who love the series or just logic puzzles in general.

Given the fact that Professor Layton is more of a B-franchise with a niche audience, it’s amazing how much time, care, and effort went into this game. The visual aesthetic of combining 3D characters in 2-D backdrops provides a nice visual pop, the score is quite sweet and catchy, and the seemingly endless stream of puzzles are both challenging and fun. If you were to boil down the appeal of Miracle Mask to a single word, it would be “charming.” This is such a sweet and well -rounded title that you can’t help but smile and be pulled into to its mysterious cartoon world. Granted, if you’re someone who bases their best gaming experiences on the number of headshots or dead hookers they leave behind after an all night session, this might no t be for you. However those looking for a brain-prodding puzzle game wrapped in an amusing fantasy narrative will easily see large chunks of their life disappear into this thing. Lord knows my friends are already wondering what happened to me.

Professor Layton And The Miracle Mask captures everything that devoted fans have come to love about the series with a 3DS-flavoured upgrade to the visuals that make it a worthwhile experience on the new system.
REVIEW SCORE
8
File Under: Nintendo, Nintendo 3DS, Professor Layton