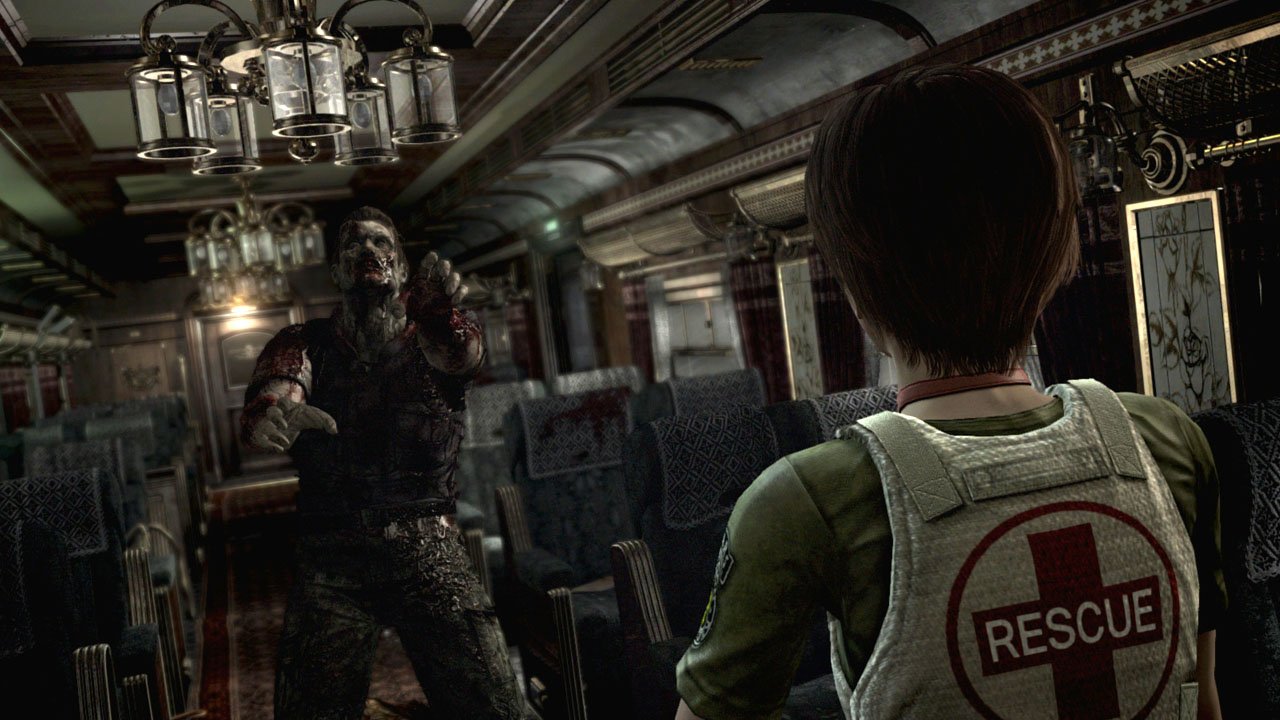 After the critically acclaimed remaster of the original Resident Evil, Capcom is back with a similar treatment to the prequel that had previously only been available on the Gamecube and Wii. Apart from touched up graphics running at 1080P 30FPS on consoles, a new control scheme that lets players automatically run in all directions instead of using tank controls, and an unlockable mode that replaces Billy with Wesker, not much has changed, for better or for worse depending on how you felt about the original. If you’re like me, then that is for the worse.

Rebecca Chambers is on her first mission for STARS when she ends up on a moving train filled with zombies and an escaped convict named Billy Coen. The two characters decide it would be beneficial to work together given their circumstances, which sets the stage for one of the most frustrating and boring games in the entire Resident Evil series. Players can control each character one at a time, or have them follow each other with the AI controlling the non-player character during combat. Thankfully, the AI does an alright job of defending itself and preventing the game from feeling like one long escort mission.

Resident Evil 0 is the last “classic” game in the series in the sense that it was the last to use tank controls and limited resources while fighting zombified creatures in narrow rooms and hallways with stationary camera angles used to build tension. These retro mechanics, coupled with the two-character dynamic, sound great on paper till you toss in the inventory system that singly-handedly ruined the entire experience for me.

Previously, items could be deposited in crates that could be accessed throughout the game, but not this time. Unlike other games in the series, characters have to either carry every item they need or drop them on the ground, which places a marker on their map. Since each character only has a few item slots, this leads to many frustrating situations. Players will have to decide if they think they’ll need a key item now or later, which character should hold on to it, or should it be dropped and if so, where. Worst of all, the menu system is just not intuitive, requiring far too many inputs that only serve to bog down the entire experience, especially when you leave a key item far away from where it needs to be used and are forced to backtrack just to pick it back up.

When not spending your time pulling out your hair in inventory management hell, you’ll be wandering through pretty standard Resident Evil locales, apart from the awesome train section at the beginning: an Umbrella training facility that looks and feels pretty similar to the mansion from the original game, basements, laboratories, etcetera. At least the enemies are a bit more unique as you’ll be taking on giant bugs and other non-human creatures alongside the standard zombies and hunters, as well as some gnarly bosses.

The combat feels as stiff as ever, and multiple enemies in a room can often cause you to become stun locked if you’re not careful, leading to a quick demise. Aiming consists of straight ahead, down, or up—which never looks like it is going to land a hit, even though it does. Overall, it feels par for the course, though the boss fights feel a lot more satisfying than shooting zombies in a cramped hallway.

The only reason to give Resident Evil 0 a playthrough is to see the seeds being planted for the other titles in the series, from the outbreak at the mansion to even the events that take place in Africa in Resident Evil 5. These revelations come mostly through cutscenes that haven’t been touched from the original release other than removing the letterboxing; thus, the in-game graphics look far more polished and clear.

Aside from two pre-order costumes, the only new addition to the game is the Wesker mode that is unlocked after completing the game for the first time. Wesker replaces Billy, in tow with his powers that he gained in later titles: specifically, having red, glowing items and the ability to make zombies’ heads explode. Rebecca still reacts to him as if he were Billy, and cutscenes and spoken dialogue still play as if Billy were there—a nice addition for fans, but not worth the price of admission alone. Unlockable costumes, items, and the “Leech Hunter” mode from the original release are still here as well.

Overall, Resident Evil 0 is the weakest of the original less action-oriented run of games in the series, and the characters and locations aren’t all that interesting or unique. If you’re not a die-hard fan of the series willing to force yourself through the nightmare that is the horrid inventory system, I’d say avoid this one like a rotting corpse.

Resident Evil 0 HD Remaster proves that no matter how much you dress up an over decade-old corpse, it doesn’t keep it from stinking.

File Under: Capcom, Resident Evil
A retail version of the game reviewed was provided by the publisher. You can read more about CGMagazine reivew policies here.