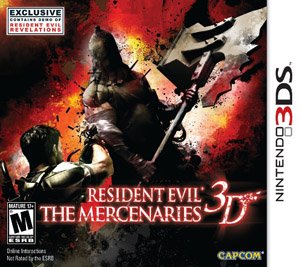 First things first, Resident Evil Mercenaries 3D is not a full Resident Evil game. 3DS owners can expect that sometime in the next 12 months when RE: Revelations drops and brings pants-wetting survival horror to Nintendo’s newest handheld. For now, we get this action-based spin off of sorts. It’s an adaptation of the Mercenaries mini-games that console gamers got along with Resident Evil 4 and 5.  The mini-game compilation won’t deliver the immersive storytelling experience of creaky doors, ominous hallways, and shriek-inducing jump scares that RE fans crave. However, that in no way means that Mercenaries 3D should be ignored. This is one of the most visually impressive and addictive experiences that the small 3DS library offers and one of the few true M-rated experiences on the 3Ds, splashing buckets of blood around in glorious gasses-free 3D. Later on in the system’s life cycle this might look like a disposable sidedish, but right now this is a must own for early system supports.

The run of 3DS software currently stocking store shelves feels like a collection of beta test programs with developers trotting out remakes and minigames to see what this new little system can do. With a full on Resident Evil experience already in the works, Mercenaries 3D was probably Capcom’s trial run at bringing the series to the 3DS. It’s a streamlined and simplified action title that ports over character models and levels from previous franchise entries. However, unlike Ubisoft’s underwhelming Splinter Cell 3DS port, Capcom has found a near perfect way of bringing the console RE gameplay experience to this new handheld. The controls are tight, the graphics are gorgeous, the 3D is well integrated, and you’ll be surprised by how quickly a dozen hours or so will disappear into what is essentially a collection of mini-games.

Players control their professional zombie killer with the thumbpad, which feels good. Holding down the right shoulder button allows you to aim your gun of choice in POV face buttons are responsible for shooting and reloading. It can be a little tricky to have to aim just to reload, but what would a Resident Evil game be without your palms sweating as a character slowly reloads while a chainsaw wielding zombie sprints towards you? You can also get extra character movement while aiming (a nice new touch) by holding down the left shoulder button while aiming. The in-game camera can be manipulated by touching the map on the touch screen (sounds tricky, but works surprising well). Your weapons can also be selected on the touch screen, which is a great design and works fast in a pinch. Overall, the control scheme is rock solid. You’ll feel as free to move around and shoot as if you were playing Resident Evil 4 and achieving that with the relatively small button layout on the 3DS can’t have been easy.

The game itself is barebones. Like previous Mercenaries mini-games you get plopped into an area filled with enemies and have to kill as many as possible within the time limit without dying. Pretty basic stuff, but there’s a surprising amount of variance within that structure. There are eight playable characters of Resident Evil lore, Chris is available right off the bat then completing levels will unlock the likes of Jill Valentine, Claire Redfield, and Wesker. Each character has their own unique gun collection, which can make a huge difference depending on the level. The locations are classic spots from past RE outings, but there are only a half dozen or so with slight variations. Zombies, monsters, and bosses also come from other games and there aren’t many, but the programmers did a good job of changing up the cast in every level. The levels themselves vary from mind-numbingly easy to system-smashingly difficult. You get rankings for every character in each level and given how different each level feels depending on which character and weapons you use, it can be pretty addictive to try every conceivable match up. 50 unlockable achievements are also available to keep completists coming back (including a double barreled grenade launcher). Then on top of all that there’s local and online co-op play. The online mode was a little finicky for me, mainly because there are so few people online at the moment. But, I have to say that revisiting levels in multiplayer definitely provided yet another addictive and slightly different gameplay experience. There’s nothing earth shattering on the cartridge, but the game can still be practically impossible to put down at times.

The best thing that RE: Mercenaries 3D has going for it is the visual presentation. It looks like you’re holding Resident Evil 4 in the palm of your hands and some characters even look as good as they did in their HD Resident Evil 5 glory. Sure, if you examine some of the object textures closely you’ll see some cracks in the sheen and there can be an occasional frame-rate drop on character animations in the distance, but for the most part you’ll be moving around the levels so fast that it’ll be impossible to notice. Simply put, this is the best looking 3DS game I’ve seen so far, taking full advantage of the almost current generation console worthy power of the pint-sized system. The 3D effect is also well implemented, particularly while aiming the sniper rifle, which offers a nice bit of depth between the aiming sight and the head you’re about to blow off. If you don’t like the 3D, you can always turn it off, but this is one title where it really adds to the experience.

For a collection of mini-games that doesn’t really add anything to the established series, Resident Evil Mercenaries 3D is a damn good game. It may only offer a few minutes of competitive shoot em’ up action at a time, but does it so well that you’ll drain the 3DS battery in no time. Hardcore RE fans may claim it’s not a full experience and they’re right. However, the brief RE: Revelations demo included on Mercenaries confirms that not only is that experience coming to the 3DS, it’s going to be an old school survival horror throwback. For now, Mercenaries is a fantastic addition to the 3DS lineup. This is a handheld system after all, and short blasts of action are probably more suited to the format that long-form storytelling anyways. Personally, I take great comfort in knowing that any commute I face from now on can be broken up by massacring waves of zombies in 3D. Capcom might not have delivered a full Resident Evil experience, but what they did release trumps almost everything else available on the 3DS right now. If you own a 3DS and like killing zombies (and really, who doesn’t?), this is a must own.

For a collection of mini-games that doesn’t really add anything to the established series, Resident Evil Mercenaries 3D is a damn good game.
REVIEW SCORE
8
File Under: Nintendo 3DS