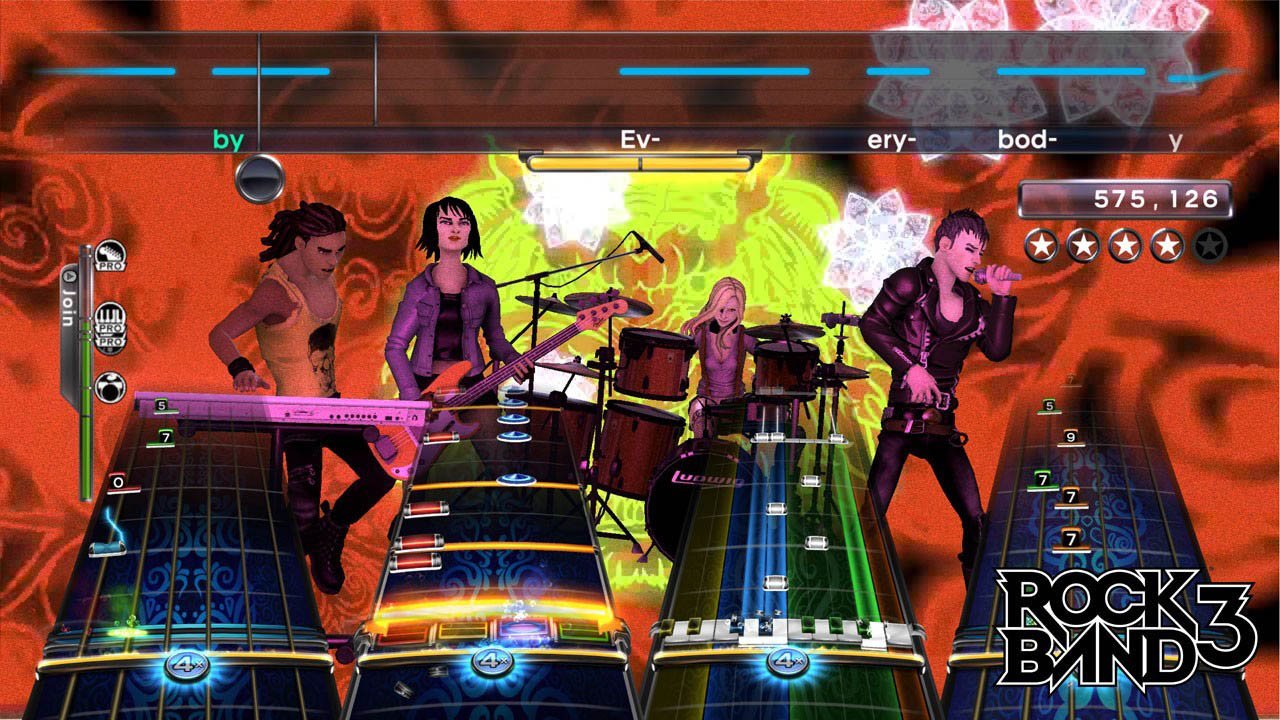 Are You Ready To Rock?

In a market that some would say is already oversaturated with rhythm games, Harmonix returns with Rock Band 3, the latest iteration in the underdog series that goes head to head with their former creation, Guitar Hero. The two franchises have taken decidedly different paths this year, and the Harmonix venture, while the riskier of the two, ultimately proves to be bigger, bolder, more innovative, more accessible and, wait for it, more educational than any music game released to the market to date.

Getting The Band Back Together

Almost everything about Rock Band 3 has been overhauled, and the presentation is no exception. The same basic pseudo-story applies; you’re part of a newly formed band out to make a name for themselves. However, where previous titles largely charted your progress through static graphics, such as presenting you with a new touring bus, Rock Band 3, from the get go, puts your self-created band everywhere in the game, with milestones highlighted by actual cut-scenes.

The graphics have gotten a noticeable facelift, an easy thing to do since Rock Band 2, released two years ago, was using a slightly tweaked Rock Band engine. Characters are more detailed and the interface has undergone some changes to make certain notifications—like solo or unison sections of a song—more subtle. But where the game really comes through is in the sound. Obviously the requirements for a music game are different from that of a shooter, but Harmonix clearly delivers on the quality of the master recordings here, satisfying all but the strictest audiophile with the richness of the sound. From a presentation standpoint, Rock Band 3 does its fans proud with better visuals the high aural standards music lovers expect. It also, for an older audience, sports one of the best song lists on any game out in the market, depending on your taste and love of 80s music.

Where Rock Band 3 is at its most bold however, is in the changes to the game. The core gameplay of hitting “gems” in time to music is still the same, but everything else has undergone a radical change of scope that attempts to make Rock Band 3 an all encompassing music game for all people. In many fundamentals ways, it succeeds, though not without some sacrifices that may puzzle or even alienate some ardent fans, depending on the reasons they played the game.

First, let’s look at the overall the interface. The game itself now benefits from an “Overshell,” which is essentially individual menus for every player so they can tinker with their own settings—or even drop and drop out of a song—without affecting others. The menu for song selection has also gotten a much needed upgrade with more detailed filters to search for songs by genre, decade, instrumentation, or even song duration. All of this makes the game much more party friendly. On the other side of things, the campaign mode that players grew accustomed over the last three years is completely revamped. A series of “road challenges” replaces the old tier system of selecting a hometown and assigns players the triple duty of collecting stars, fans and spades in order to advance the career of their band. In addition, every single game activity you perform contributes to this somehow, whether its playing in Quickplay at a party or playing online with friends, you accumulate fans that add to your overall career arc. One the one hand it makes every Rock Band related activity more meaningful, but some will be opposed to the blurring of lines between “playing for fun,” and “serious campaign” advancement. This is also where we see the biggest change to the player experience, with the complete elimination of head to head competitive play. While players can still play songs alone or together and compete with high scores on a leaderboard, actual competitive play in the form of Score Duels and Tug of War modes is gone. It’s definitely truer to the spirit of music, since musicians themselves don’t try to screw up the performance of another band member, but after three years of being able to have competitive, head to head multi-player some Rock Band veterans will definitely not be happy with this omission. The multi-player experience is now strictly co-operative band play, with no more “red robin,” picking of songs from each player in turn. Now every player can pick a song, though the host still has final say on when to start playing.

On the instrument side of things, there have been a lot of changes, but we’ll go over the “legacy” instruments first. Guitars have been tweaked with a slightly tighter window to the timing of hitting notes, and they’ve also gotten a new “tremolo” function for handling fast trills. Drummers also benefit from something similar for fills, but sadly, the promise of being able to use a second bass pedal is under utilized as new songs still don’t take it into account, only allowing a second pedal to be used as a high-hat pedal in drum fills and free-style play. Vocals get a bit of a change with a tweaked engine that—at least on the PS3—finally eliminates “shaky arrow” problem that has hounded singers for the last three years. Strangely, the ability to tweak microphone sensitivity has been removed, though it seems like the new engine is less tolerant of humming and rewards vocalists that actually sing their way through songs.

But the big change comes in the form of the new Pro Modes, including a keyboard. This is what will separate the casual, and even the hardcore gamer from the aspiring musician. Keyboards are the new instrument and Harmonix has a broad mix of good introductory songs for it, but going into Pro Mode will take work. If people didn’t want to learn to play the piano because it was too hard… well, it’s still going to be hard, it’s just gift-wrapped in popular songs, leaderboards and online play. The same applies to drums, although most hardcore Rock Band drummers will probably make the jump easily since they’ve already learned the fundamentals from three years of playing Rock Band and Rock Band 2. It’s the guitar that presents the most problems. At the time of this printing, the Mad Catz Fender Mustang will not be on sale for a month, and the real guitar won’t be available till next year, so Pro Mode won’t even be accessible for wanna-be rockers. On the other hand, even if the Pro Mode were available… this is learning how to play a real guitar. Hardcore Rock Band Expert level guitar players assuming that picking up a real guitar will be an effortless translation are in for a rude shock, and inevitable deflation of their ego.

Harmonix has put together one of the best, overall music games on the market right now, but it’s not without teething problems. Those expecting a simple upgrade of Rock Band 2 may be in for a potentially unpleasant shock if they are resistant to change. Hopeful musicians will find a new way to learn, but this will still require practice and dedication on their part in order to advance. Casual gamers however, will find little to criticize, and the numerous tweaks and improvements make this THE music game to own in 2010.

Harmonix has put together one of the best, overall music games on the market right now with Rock Band 3, but it’s not without teething problems. 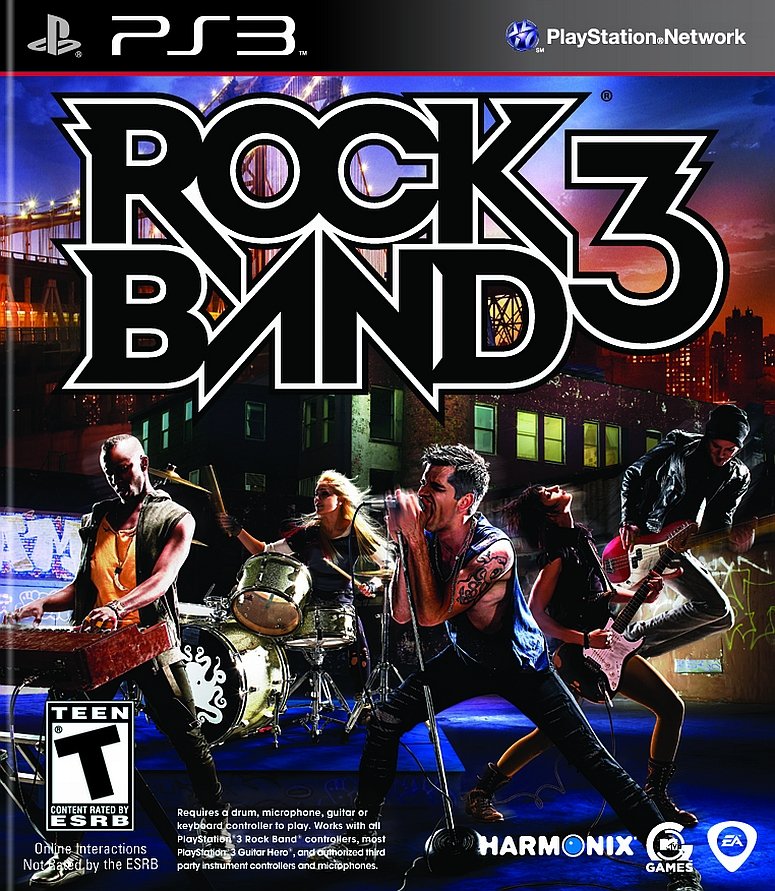