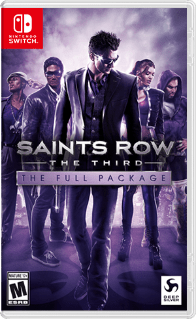 Saints Row: The Third revels in absurdity. It rewards ridiculousness. It’s the open world crime game for those who like to strip naked and ride their bikes around punching people in GTA V. It is designed, from the ground up, to get you to act as foolishly as possible in a video game world, loving every single second of it. If you have a love for silliness, slapstick, and crude humour, this game will put a smile on your face.

The Saints have grown somewhat popular since the events of Saints Row 2. They sell energy drinks. Hang with movie stars. They also apparently infuriate gangs of luchadors and hi-tech hackers, causing no end of trouble for themselves when they refuse to play nice with the Syndicate, a major crime group that wants a large piece of town. While the Saints may be hobnobbing with celebrities and adult film stars, they’re not beyond laying a city-wide beat down the Syndicate won’t soon forget.

That’s assuming you ever really get around to fighting the Syndicate, as Saints Row: The Third is all about diversions. There’s a large variety of minigames to take part in, from throwing yourself into traffic to make money from insurance fraud, blasting through the streets in a tank to see how much damage you can cause, to taking part in murderous game shows. Each has several levels of difficulty to keep you challenged, as well as to encourage you to keep coming back for more silly mayhem.

These varied minigames all want you to give in to your silly side. The Insurance Fraud game might be the king among them, as you will be hurling yourself at cars, hitting a ragdoll button to just go limp. This adds some extra bounce to getting run over, which you can use to ping about like a human pinball, building up more momentum with each car. See how many times you can hit the same vehicle. See if you can build enough momentum to cross a lake (you can). Each game pushes you to just savour in the game’s absurdities and your own destructive nature.

You don’t even have to start up a minigame to goof off, as the game rewards you with Respect (experience, essentially) for taking part in all manner of dumb activities. You can try to surf on cars. You can drive down the wrong lane. You can take someone hostage if you steal a car with someone in it (you can also jump straight through the front window to steal a car faster, which is fun in and of itself). It feels like the developers thought of every way you might screw around, and programmed some sort of reward or tiny game mechanic around it.

The money and Respect you earn from all this messing around can be funnelled into even more silliness. With the game’s character customization, you can mould your own silly gang leader with all manner of voices, shapes, and personalities. And you can do it at will at any plastic surgeon’s office, so don’t ever feel stuck on a character. You can also funnel it into making your character stronger, giving them resistance to certain types of damage, increase their strength, or make your handguns fire explosive rounds. It all leads back into making you tougher or unlocking sillier things, continually growing your character so that you can cause more trouble around town.

While you can easily goof off in most open-world games, Saints Row: The Third seems determined to reward you for it. Instead of using the nature of the open world to allow for silliness, the game uses in-game currencies to push you to do it. It’s daring you to let go and be silly, creating a ridiculous, enjoyable experience.

The main missions, should you ever get around to them, only add to this. You’ll be facing down strange gangs in stranger worlds, dealing with zombie attacks, wrestling showdowns, and uprisings from space (sort of). The game utterly refuses to be serious, instead throwing the player into increasingly silly situations even as it pushes the player with its challenging action.

That said, the difficulty can be a little wonky, depending on what you want from this experience. The Normal difficulty can be a stiff challenge if you don’t do a lot of extra sidequests for money and Respect, as you can die quite quickly due to the game’s clunky controls. Its silly nature almost seems better suited to its easier difficulty, as enemies go down quite quickly (and you can still die from carelessness), although it can feel a bit too forgiving (although, it IS easy mode). You’ll have to play with this to find your own comfort level.

All of it looks sharp on the Switch, especially since the game is eight years old. Handheld mode is where it’s at, as bringing this game on the road is delightful, plus the game looks best in this mode. Putting it on the dock shows a game that’s definitely displaying its age, with some jaggy visuals taking away from the visual presentation.

The Switch control scheme feels a little unwieldy, which may tie into the clunky feelings of its controls. It has an odd button layout for some of its interaction commands, and the tiny shoulder buttons can be a bit of a nuisance if you have big fingers. A Pro controller is definitely recommended, although the base controls do the job with a bit of practice.

If you’re in the mood for some crude humor and silly, over-the-top action, Saints Row: The Third is still an undisputed king of ridiculousness.
REVIEW SCORE
8
File Under: