Shadow Warrior 2 posed a bit of an interesting review for me. It’s the first time I’ve reviewed a game with the help of someone else, as we were sent a second code for testing the game’s co-op mode. Better still, because of scheduling conflicts in the office, I was given the chance to offer the code out to a friend, which meant I’d not only be reviewing co-op pre-release, but I’d be doing it with someone who I could threaten with physical violence if they didn’t hold up their end. That, kids, is what I call a win-win.

It’s not too often that we see a game make a radical departure in genres between sequels. Sure, we might see the odd title reach across genres, but to stretch from something like, say, a Duke Nukem-style over-the-top FPS into something like a first-person ARPG loot-grind is just dumb. Dumb like a moose. A dumb, brilliant moose. Suffice it to say, with my experience growing up with both ARPG titles and classic FPS games, I was rather interested in the sequel to the smash cult hit reboot thingy that is Shadow Warrior that sought to mash the two together with all the subtlety of a football to the groin. Likewise, the friend I chose to play Shadow Warrior 2 with, whose name has been changed to protect his identity (let’s call him NOTMike), and I have an unhealthy amount of experience in ARPGs together, ranging from the similarly-veined Borderlands games to the theorycrafter’s wet dream that is Path of Exile. Suffice it to say, we had our share of moments in the new Shadow Warrior as well. 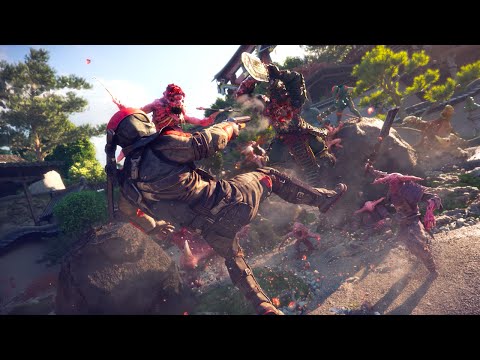 I’ll confess that neither of us managed to finish the main story, so I can’t speak on expected features like New Game+ or new difficulties, or whatever you want to call them, but it certainly wasn’t for lack of trying. As they say, “The way of Wang is long and hard.” And long and hard it was. Being a bit of a completionist, I spent much more time than required in missions (which play out like typical zones in an ARPG) than was necessary. Also, playing on the hardest difficulty that features increased loot at the penalty of massive losses on death probably wasn’t the wisest choice. But, hey, NOTMike and I usually play in Hardcore, so it had to be done. All told, we clocked about 10hrs in co-op, which left us at a little over 30 per cent of the game completed. In solo, I cleared about double the content in double the time—fancy that. Two things strike me about this. The first is that there’s a lot to play through in Shadow Warrior 2, even if tilesets do start to repeat themselves by the second act. The second is: holy crap is this game fun. Like, REALLY fun.

Rather interestingly, NOTMike and I share very similar opinions on the game. The first thing that stuck out to both of us was just how viable both ranged and melee weapons are. We were both put off by games like Fallout 4 where melee was only viable while using V.A.T.S., and not while playing in real-time mode. Not only does Shadow Warrior 2 very successfully implement its melee combat, it’s also the first FPS I’ve seen where sword dancing is all in first-person. Whether it’s spins, lunges, or rolls, they’re all there. It’s mildly disorienting at first, but hugely cool. Also, superhero landing! There are boatloads of quality of life features with things like the inventory, which really shine as well. That being said, there are things like a lack of large-scale map to pan around which can be a bit frustrating at times, as toggling between a mini-map and a slightly bigger mini-map just isn’t enough. And we both noticed rare-but-catastrophic crashes that seemed to occur because of the physics in the game causing apocalyptic explosions with grenade or rocket launchers. Not a huge problem in themselves, but losing an hour of progress because the game only saves content when transitioning maps or manually exiting is a bit frustrating. But, then you just get to blow all that stuff up again, and all is right with the world, so, swings and roundabouts, really.

To be clear: Shadow Warrior 2 is NOT the perfect game—but I can’t remember a single reason why. The whole thing is just too damn fun for me to care about its little faults. The writing is a bit of a one-trick-pony of juvenile jokes from an era lost to political correctness and faux maturity, but no more so than Borderlands or South Park. And, comparatively, Shadow Warrior 2 does a hell of a better job of its level design than the former, and the latter doesn’t have games in FPS yet. So, there’s that. And really, whoever did the level design in Shadow Warrior 2 deserves a medal. It’s staggeringly beautiful, and features an awe-inspiring amount of verticality, which really sets the game apart from its contemporaries. Another medal should be rewarded for whoever decided that the dash feature should have no cool down, as it makes for insanely fast and stylistic combat, while also being excellent quality of life. And then a third medal for the team that optimized Shadow Warrior 2. Seriously, they’re not paid enough. Shadow Warrior 2 runs flawlessly, even with an absurd number of effects and physics interactions appearing on-screen.

It may be neither the numbers-haven that Path of Exile is, nor the speedrun-viable shooter than the new DOOM is, but Shadow Warrior 2 strikes an excellent balance between the two; there’s loads of ways to customize your play style and oodles of loot to keep you entertained, but there’s a really robust shooter underneath—something I feel it does much better than Borderlands, if I’m honest. Whether you’re playing alone or with friends, the only reason I could think to not recommend it is if it was for the little humans we refer to as children. Seriously, this is like bringing them to see the Deadpool movie. Just don’t do it. For everyone else, I give it four thumbs up—because I’m the one writing the review, and NOTMike totally agrees that I’m the bestest and most qualified games journalist to recommend these things.

I give it four thumbs up.
REVIEW SCORE
9
File Under: Devolver Digital, Shadow Warrior 2