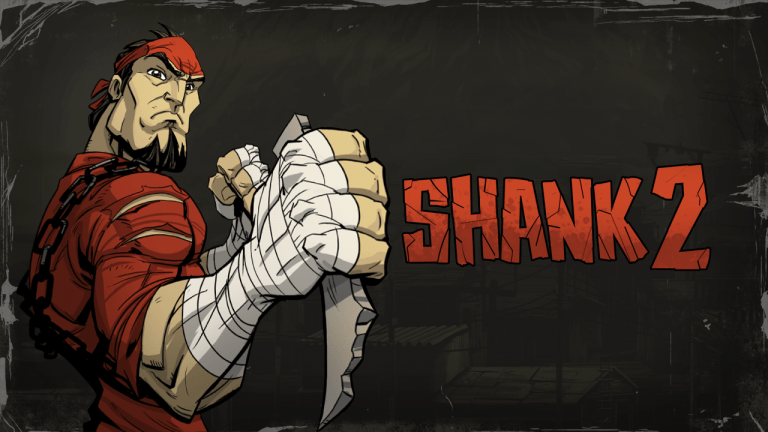 In preparation for the release of Shank 2, I went back and replayed the original Shank.  Doing so made the experience of playing through Shank 2 much more informative, to see how Klei Entertainment tweaked the gameplay mechanics for the new game, updated them, and gave them a new level of complexity compared to the first game.

Shank`s story was an intimate one, that focused on Shank’s quest for vengeance after the brutal murder of his girlfriend Eva.  The quest featured Shank taking on all those involved in her murder, culminating in a fight against mob boss Cesar.  Shank 2’s story takes place sometime later, as Shank heads home, only to find out that terrorists have taken over the area and are terrorizing the locals.  As he takes a bus into town, it’s hijacked by terrorists, who Shank must fight off in order to protect the bus.

The story is actually a far more engaging one than in the first game, with a grander scale, a sprawling story, and the addition of a female character that players get to take control of for certain levels.  It helps to keep the gameplay fresh, and adds a further element to the game that wasn’t present in the original Shank.  Although the story might start out on a simple bus, it ramps up to become something far removed, as Shank finds himself on an island, fighting for his life, to save the lives of those he cares about, the family and friends he’d long since left behind.

Having just replayed Shank, it took a while to become accustomed to the controls in Shank 2, as well as to come around to the changes that have been made.  The biggest changes are in the various combat controls, as there’s more that Shank can do in combat in terms of achieving combos, grabs, throws, knocking opponents into the air with various weapons, as well as various kinds of takedowns.  The blocking mechanism is very different as well.  In Shank, blocking was done by activating the guard function, which in the case of the PS3 was done using L1, but in Shank 2, players use the right analog stick, and are able to actually move and vault through the air while activating the block feature.  This allows players to remain mobile while also blocking opponents’ attacks, including doing so while in the air.  A limitation in the gameplay which wasn’t present in the first game is that players must select their gun and heavy weapon at the beginning of the level, instead of being able to cycle through the different weapon options as they could in the first game.  In the long-run, it makes the combat system in this game more refined, as well as more strategic and customizable.  A change that I was extremely grateful for was one which is relatively small yet important, changing the button used to pick-up health packs.  In the first game, the same button for shank attacks was used for picking up health, leading to situations where when in a boss fight it was far too easy to pick-up health when you didn’t yet want to use it because you were trying to fight off the enemy.  In Shank 2, different buttons are assigned to the two functions, making gameplay much smoother and less frustrating.

From a visual standpoint, Shank 2 picks up right where the first game left off, giving players a game that has a very comic book feel to it, in terms of how the characters move on the screen, and how the backgrounds are rendered.  For fans of comic books, it’s a very distinct look, and makes the game pop visually right off the screen.  The character designs have been improved as well, with more variation in terms of the different villains that menace the main character Shank.  The cut-scenes have a great aesthetic to them, with a noir-meets-pulp comic book feel.

Fans of Shank will really enjoy Shank 2, which boasts more complex and intricate gameplay, as well as refined controls which allow for a more enjoyable gaming experience.  The story is quite enjoyable as well, with a good variety of enemies to engage as you play through the story, with the only downside being a survival multiplayer that fails to recapture the fun of the first game’s multiplayer story mode.  This game is a fun and enjoyable romp, with a fair degree of re-playability thanks to the customization of the player’s weapon load outs per level.

The multiplayer mode in Shank 2 is a bit disappointing this time around, as it manages to both add in new features while taking away part of what made the first game’s multiplayer mode so enjoyable.
REVIEW SCORE
8
File Under: Action, Adventure, PlayStation