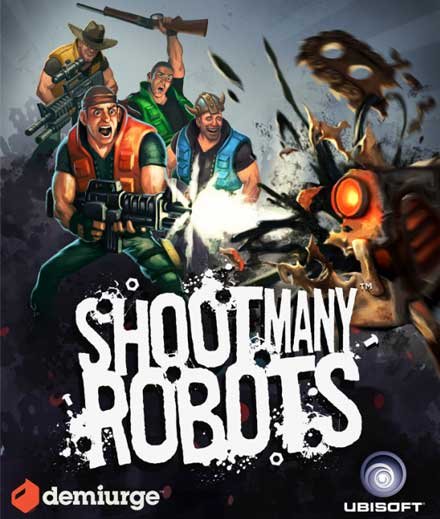 I shot a lot of robots. I did it by myself, I did it with friends and I did it with strangers. Each time I did it, it felt good. Whether they came in pairs or in massive waves, I shot them down with increasingly powerful weapons while wearing increasingly ridiculous clothes. The fact that many of the places I shot robots in looked very similar to one another and that the tone of the game I’m talking about so closely resembled one I’ve already played didn’t matter. By the time I finished up Shoot Many Robots my prevailing thought was simply, “what a lot of fun” and that, to me, seems like one of the best things that can be said of a videogame.

The game opens with a short introduction to your main character, a man living out of his RV and preparing to defeat the robot menace destroying the world. You play as P. Walter Tugnut (yep) and fight across an American south trying to defeat the unthinking, mechanical army that has overtaken the world.

It works like this: the player enters a stage and plays through it in side-scrolling fashion, left to right, while blasting through hordes of robotic enemies. There are jump and double jump commands, a button to stay rooted to the spot and aim more accurate shots and various actions (sliding, hovering or slamming the ground) granted by equipped items. The main action, though, is the one implied by the name of the game. Shoot Many Robots is concerned with the joy that comes from making little hunks of antagonistic metal and circuits explode. Whether this is accomplished via flamethrower or shotgun or rocket launcher or chain gun, the goal is always the same: defeat the robots before they overwhelm you.

It all works a bit like Borderlands minus the first person perspective. A ludicrous number of guns and clothing items are available to discover within levels and purchase through Walter’s RV. Between missions these different weapons and items can be bought with nuts collected from exploded enemies, their stat bonuses allowing players to create very different versions of their characters to best suit their preferred style of play. Mixing and matching the right configuration of pants, vests, hats, primary and secondary weapons leads to very different outcomes. With one set-up Walter may be quick, nimble and ready to indiscriminately dispatch enemies while zipping around the stage or hovering the air; with another he may be slow, heavily armoured and more suited to hunkering down and picking off careful shots from higher ground. This malleability encourages experimentation and rewards players who are ready to mix up their equipment set-up depending on the mission to come.

Another Borderlands comparison: the presentation. Shoot Many Robots has taken cues from Gearbox’s post-apocalyptic setting and visual style. The hard edging of the game’s cel-shaded characters and environments creates a look that will be immediately familiar to many. Walter and his robot enemies are all cartoony, their colourful designs and interaction with a dusty, devastated world enhanced by blocky outlines that look as if they’ve been drawn over every silhouette with thick black ink. This is not to mention the music (a similar collection of 12 bar guitar and harmonica blues numbers) and sense of humour. Like the game it takes such clear inspiration from, Shoot Many Robots isn’t always as funny as it tries to be, but the sheer breadth of gags packed into the item descriptions and wearable equipment provides a light and breezy tone.

Despite its somewhat derivative nature, though, Shoot Many Robots excels in taking an excellent core concept of shooting, looting and levelling and expanding on it in a worthwhile way. Though extended periods of play can become frustrating (especially as the latter half of the game gets tougher and tougher) there’s still a lot to be said for the solidity of the mechanics and the situations the player is placed in. Running crowd control on a swarm of weaker enemies while figuring out how to assault their more beefy (and dangerous) allies creates moments that are reminiscent of the best parts of Valve’s Left 4 Dead series. Choosing the right equipment before a particularly tough mission in order to boost the right skill sets can call to mind the pre-battle preparations of a role-playing game. All of it comes together really nicely, emphasizing the game’s RPG and action influences in equal measure.

There’s a lot to do in the game as well. Each level takes place within one of six stages usually ending with a boss robot. The environment is designed intelligently, providing plenty of room for thoughtful players to corner enemies or flee to better vantage points when things get too hairy. Once the player has destroyed the stage’s robot foundry, it is effectively “completed” — though returning to replay missions (and improve on an established skill rating) is encouraged. Grinding out more experience, items and currency goes a long way toward preparing for the second half of the game’s extremely challenging battles and working at a higher end of level points score — either for fun or to climb the leaderboard — provides additional incentive. The setting does begin to wear a bit thin after a while, the usual progression of field to city to factory becoming overly familiar after a few hours with the game, but the action is good enough to keep this drawback from being much of a sticking point.

Matchmaking can be a bit spotty — multiplayer is, ideally, a mode to play with friends instead of strangers — and joining up with a game in progress can take a long, long time. Connection issues also cause multiplayer sessions to end too often as well. When it does get going, though, the co-op gameplay is a lot of fun, transforming the more methodical pace of solo play into a frantic experience. Bullets and robots fill the screen (only occasionally causing the framerate to stutter a bit) and make for a lovely, chaotic experience. Going through the campaign with three additional Walters is, really, the ideal way to complete the game, but the spotty matchmaking gets in the way of making this a truly viable option. Considering how much of a focus this aspect of Shoot Many Robots is, it seems strange that the developers didn’t wait to release their game until these problems were ironed out. A patch that resolves the spotty matchmaking would go a long way toward improving the game.

Though I don’t usually like to make recommendations based on some imagined cost/fun ratio, Shoot Many Robots is a great value proposition at its $10 price point. There is a tremendous amount of game to play through and plenty of reasons to keep coming back for further rounds of mechanical homicide well after completing the title. The quality of the action and the depth of the gameplay easily outweigh a handful of faults, making Shoot Many Robots a game well worth checking out.

Shoot Many Robots is concerned with the joy that comes from making little hunks of antagonistic metal and circuits explode.
REVIEW SCORE
8
File Under: Action, fighting game, PlayStation, Science fiction