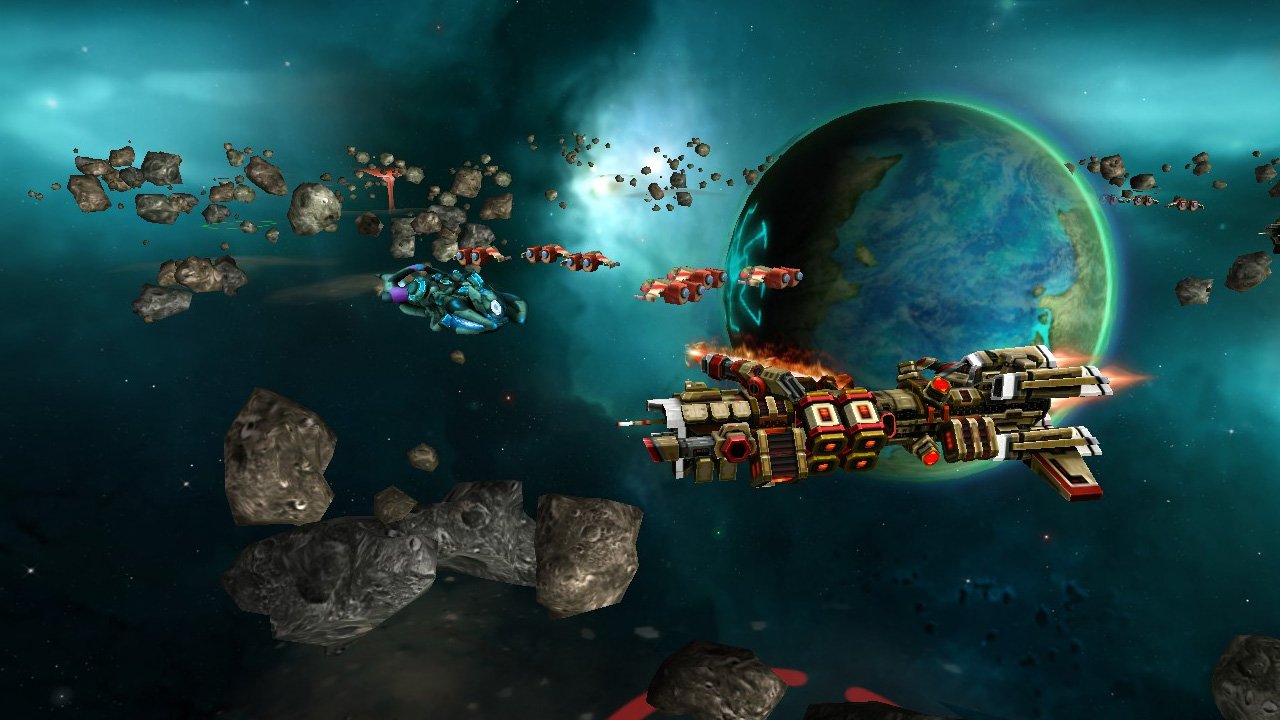 The Sid Meier brand comes with it heavy expectations.  Sid Meier’s games are usually complex turned-based strategy experiences with both breadth and depth, but Starships is a simpler extension of Sid Meier’s Civilization: Beyond Earth, which makes it difficult to judge as a standalone title.

Starships pits various factions against each other colonizing and conquering the galaxy.  The game is a combination of resource management, exploration, and tactical space battles, with a side of perfunctory diplomacy.  Unlike a full Sid Meier experience, games of Starship only take a few hours to complete.  It’s also  much easier than a standard Sid Meier game.  It’s “Sid Meier’s light” territory: the core of the Sid Meier experience is there in short, gentle bursts, and that’s probably the core achievement of the game.

Setting up games involves only one menu screen and six variables, as opposed to the multiple screens required to set up a game of Beyond Earth.  The way the game variables are selected is really slick, if more limiting than Sid Meier fans are used to.  You have three “affinities”, eight leaders, and then different map sizes, numbers of opponents, difficulties, and victory conditions to choose from.  Limiting the victory conditions is the best way to change up the gameplay, because otherwise the Wonders victory is a little too easy to achieve for my liking.  You only need six, and players with the Supremacy affinity already start with one built.
After you make those choices, you’re right in the game, which is an intuitive point-and-click affair that doesn’t require quick decisions or quick reflexes.  The tutorial and help functions are excellent, especially the “ADVICE” button which reminds you of the various tasks you need to do each turn without quite playing the game for you.  The advice is just that: advice.  It stops new players from being overwhelmed, but it can be ignored if you want to push a particular tactical advantage.  It’s a learn-by-doing approach that works really well, although it isn’t quite as fun as the gallery of advisors from past Sid Meier games.

However, it’s the advice feature that’s also the buggiest.  I experienced a strange configuration issue at the very beginning where the close button of the tutorial screen was buried behind the windows 8 start bar at the bottom of the screen.  This happened with every new game I started.  The whole game defaults to a 4:3 ratio windowed screen on the desktop, and I’m not sure why.  Full-screening made this close button disappear completely.  Perhaps this is just on my computer set up, but it seemed a rather obvious issue.  I got around it by hitting the esc key, but it was irritating.

Another persistent nuisance level bug is that the “Shore Leave” prompt carries over from the end of one turn to the beginning of the next one.  This is really confusing when you’re getting the hang of the game.  If you don’t want this to happen, you have to manually close the advice box, which gives the game a somewhat unpolished feel.  This is a shame, because other elements of this cheap and cheerful game are top notch.
The character designs – carryovers from Beyond Earth – are diverse without seeming preachy or politically correct.  “English speaking white man” is not the default character choice, nor is it linked to a Western identity, but that fact is just there.  You’re not beat over the head with it.  Sid Meier games have always been great about diversity that’s actually diverse.  I just wish the AIs had more distinct personalities too.

The music is appropriate in an Epcot Centre kind of way.  It provides mood without getting in the way.   The space computer voices are well done, and the laser and torpedo sound effects are appropriately “spacy”.  This may sound pedestrian, but sometimes the right call in game sound is to cater to the player’s expectations.  Space games do well not to reinvent the wheel, since so many wheels have already been invented that there’s plenty of existing choice.

The “select from existing wheels” approach can be found in the ship designs as well.  PC spec requirements are minimal, and the graphics look just as good as they need to, favouring stability over the extreme amount of detail sported by Civ V.  Influences from Star Wars, Star Trek, and even classic Battlestar Galactica are clear, so there’s mass appeal.  Weapons include long distance laser weapons, short range plasma cannons, and trusty ol’ torpedoes, evoking a sort of Wrath of Khan style submarine-battles-in-space vibe to the gameplay.
The turn-based space battles are fun, if more-than-slightly unnaturally restricted.  The battles take place on a flat plane, as if on the surface of water, as opposed to a 3D battlefield which would be more realistic in space.  Asteroid fields restrict movement and lines of sight, because apparently the ship captains don’t think to move above or below the debris.

This lack of “realism” in a science fiction setting is made up for with gameplay that requires sufficient tactical attention without being punishing.  Normal difficulty is still fairly easy, and the success probabilities offered before the battles tend to be pessimistic.  There’s a lot of riffing on Sins of a Solar Empire in the space battles, albeit in a more relaxed, turn-based format.  Diplomacy was hard for me to judge because I don’t tend to be a very diplomatic TBS game player, but it does have its place.  You can’t fight everyone at once.

The one thing I didn’t like, tactically, was the inability to split your fleet to be multiple places at once.  Granted, garrisoned units are replaced by the “Planetary Defense” upgrade, but it still felt artificial to have only one fleet patrolling the galaxy.  There’s a charm to the simplicity, but it is artificially simple.
If you like those days-long Civilization sessions going through thousands of years of human development, the brief sessions of Starships leave you feeling like there’s something missing – like you’re eating a salad when you really want a hamburger.  But the game only costs $17, so that should set expectations regarding how much game you can expect to get.  For someone who’s curious about turn-based strategy games but doesn’t want to commit the time, money or frustration to attempt the complete experience, Sid Meier’s Starships provides just enough strategy and tactical challenge to test a beginner player.

And I have to admit, there was a certain zen quality to the whole experience.  While it wasn’t a game I’d seek out on my own, I see the benefit of a shorter sampler experience to introduce new players to a game genre I love.  While perhaps more suited to mobile devices than the PC, Starships provides unlimited play hours for its relatively low price tag.  Then again, Steam sales allow you to get full games for this price, so hardcores should leave Starships to the samplers.

It's “Sid Meier's light” territory: the core of the Sid Meier experience is there in short, gentle bursts, and that's probably the core achievement of the game.