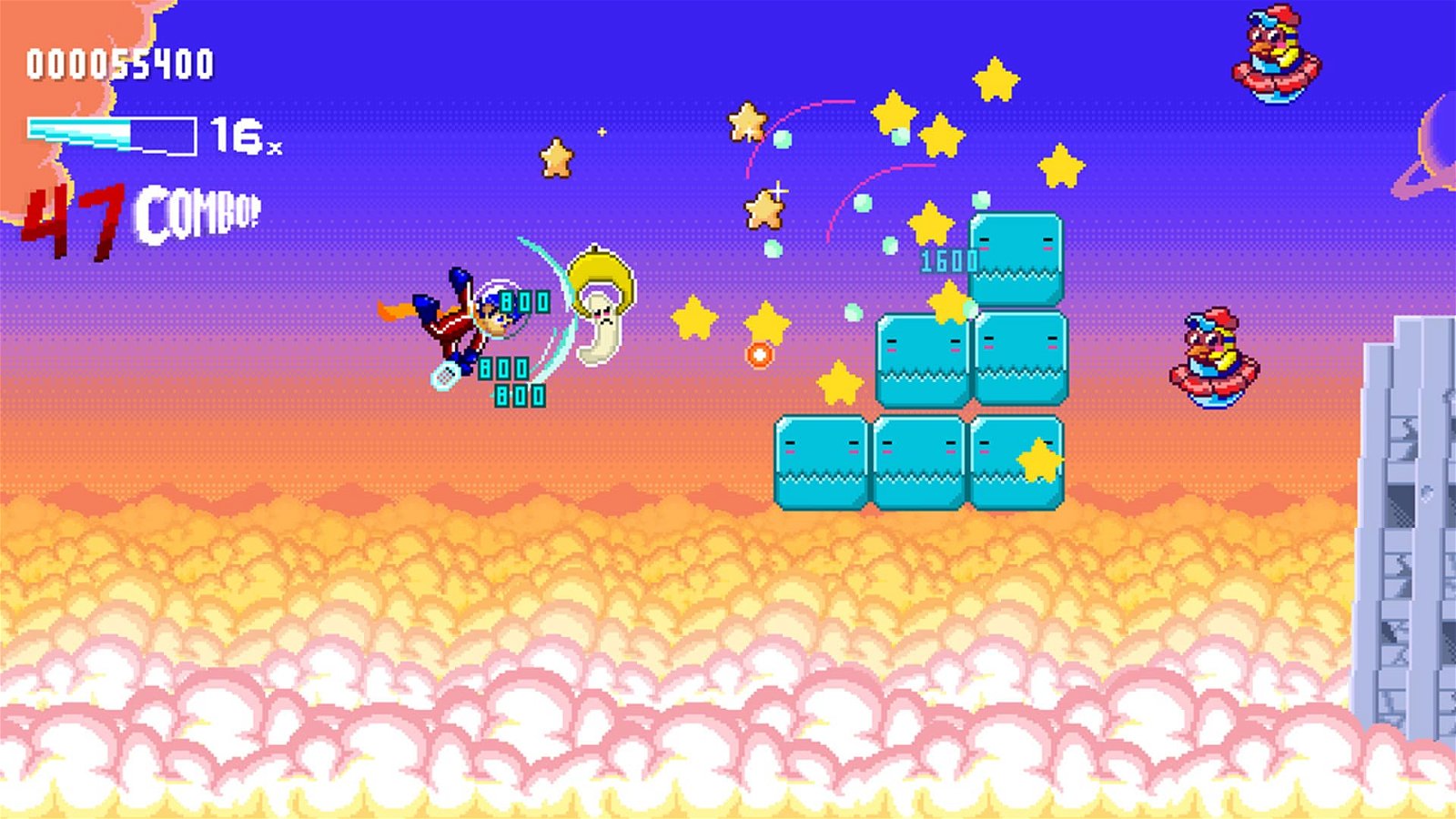 Shoot-em-ups are side-scrolling 2D shooters predicated on showering the player with enemies and bullets to obliterate and dodge respectively. Brick breakers, on the other hand, are pong-like games which usually situate the player in a static screen with as few as one ball on screen at a time.

The two share a core appeal: the catharsis of clearing a screen. You move your avatar—be it a floating rectangle or a spaceship armed to the teeth—around a 2D plain in reaction to sprites. By your will and precision, you watch as your projectiles—whether a thousand bullets or a single ping pong ball—traverse the screen to meet brick or baddy, both begging to be obliterated. Through this lense, it would seem these two were a match waiting to be made.

In Sky Racket, you autoscroll through barrages of enemies and moving bricks, swatting ball-like projectiles away from you towards your every obstacle. Unlike in a standard shoot-em-up, you are not supplied with firepower, but have to wait for enemies to send ball-like projectiles your way. You then swing your titular racket to whack the ball back from whence it came, and the bouncing, brick-breaking fun begins…ostensibly.

One of the problems with this hybrid is this reliance on enemies. Those ball-bullet shots don’t appear as often as other hazards. So I found that often if I missed my chance at returning any serves, I’d have no way of fending off the onslaught of enemies that would fill each screen. This happens so frequently that Sky Racket tends to feel less like an empowering shoot-em-up and more like a sadistic, hellish prison, as swinging your racket rarely does any damage to enemies on its own.

The design of these levels exacerbates the issue of these dry spells. Most of the levels’ obstructions come in the form of moving blocks with blue faces on them, which as the blocks which you must bounce your ball towards for elimination. The problem is, these bricks are huge and move all over the screen. Each brick is roughly the same size (if not bigger) as your avatar, and there are often a dozen or more onscreen at any given moment. If one were supplied with enough firepower, clearing the screen of these blue-faced obstacles wouldn’t be a problem. But since shots are supplied by enemies (and infrequently at that), I found that most of the game felt like an exercise in avoiding flying obstacles with no means of retaliation.

There are points in Sky Racket that this lack of supply brinks creates such a difficulty spike, it brinks on absurdity. One memorable dry spell takes place in the game’s third level, in the form of chipmunks.

Allow me to explain: some of the blue-brick faces are extra stressed looking, which means if you hit them with your racket, chipmunks fly out of them. If you get hit by the chipmunks, they cling to you and you have to shake them off by jigging the analog stick back and forth. If you’re successful, the chipmunks will fly off you, and you have a shot at hitting one of these rodents, thus launching them towards your enemies. This game is absolutely batshit, by the way.

So, in the third level, I faced off with some divine monkey that would summon floating spikes from above and below. There were no tennis balls to be found. No floating ducks shooting ball-like projectiles, no fat squirrels that would shoot out fast tennis balls, no stressed-looking blue blocks to conjure chipmunks—none of the usual conjurings of this hellscape were present. Spikes covered nearly every inch of my screen, and I had no way of subduing this floating primate.

After struggling to decipher how I was supposed to fight this thing, I discovered some of the spikes would spawn chipmunks. The goal, apparently, was to maneuver through the myriad of spikes, get intentionally attacked by chipmunks, shake them off, then try to swat them towards the divine monkey. Nothing indicated to this system beforehand, and nothing prepared me for the grueling feat that was swatting chipmunks into a godly monkey within an iron maiden of floating spikes.

Getting through this level on my own proved all but impossible. Thankfully, Sky Racket includes both a God Mode (sans any cheat codes) and cooperative play. I gave the latter all of a twenty-minute trail and found it functional, but less appealing than having the space to maneuver amongst the smatterings of enemies and blocks alone. Co-op mode proved pointless by the time I was halfway through the game’s dozen-or-so levels, however, as the lack of any checkpoints—and the scarcity of health-regenerating pickups—in each level meant my partner and I rarely saw any chapter through to the end together. It helped to have someone on my side, but more as an alternate target than as an actual asset.

Ultimately, in trying to combine shoot-em-ups and brick breakers, Sky Racket misses the point of both genres. Its reliance on enemies’ projectiles is a clever concept, but poorly implemented. And the level design and difficulty are so inconsistent, one can only wonder how much thought was put into the game after the core concepts were conceived.

In trying to combine shoot-em-ups and brick breakers, Sky Racket misses the point of both genres. 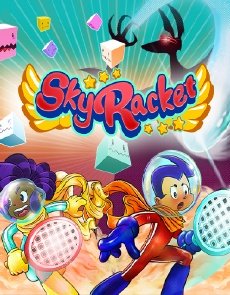