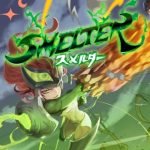 Smelter starts with a somewhat familiar scene: Adam and Eve are by the tree in the Garden of Eden. But this time it’s Adam who eats the apple, and from there Eve is launched into a totally bizarre adventure to find him again, with the aid of a demon named Smelter.  He needs her help to regain his power and rebuild his empire, so he lends her his strength as a sort of power armour.

It sounds crazy—because it kinda is. Dengen Entertainment and X Plus have served up a wild ride, a mashup of familiar elements that feels like its own unique experience.

There are essentially three game modes within Smelter. The main is the 2D, Mega Man X-style, side-scrolling action-adventure, where players control Eve and utilize Smelter’s powers.

Three different power sets become available, each with specific strengths. The default power, Gurabi, hits hard but has no range; the second power, Eremagu, uses a whip-like attack for mid-range combat; and the third, Nutoro, is a straight-up blaster that would make Samus Aran proud. Each has different movement skills, like double-jumping or gliding, and can be upgraded by unlocking certain nodes on the world map. Pressing the trigger will cycle through these power sets on the fly, once unlocked.

These action modes are the core of the game, and when I wasn’t playing them, I wished I was. Moving around feels like the best sort of homage to Mega Man X or Mega Man Zero, or even Metroid. Eve’s elemental skills are supplemented by a Smelt Blade super attack, which can decimate enemies once it charges. Enemies also have a chance of being left incapacitated and susceptible to a special grab attack, which restores health.

Once Eve has gotten comfortable with all her tools, the challenge escalates steeply. Pixel-perfect precision becomes required in segments, and you will have to contend with both foes and the environment itself. One particular stage made me realize that I wasn’t in Kansas anymore, as I died repeatedly near the end of a forced-scrolling segment.

The second mode is an offshoot of the action stages—Trials. Scattered throughout each stage are hidden trial doors, where Eve can undergo a smattering of different challenges based on elements from the same level. She may need to traverse an area without being seen by enemies or reach the goal without being touched by foes or hazards. One action level features giant Dune-like worms, and one of its trials is an obstacle course where Eve must quickly dodge them and reach the goal unscathed.

Naturally, the challenge ramps up here. Eve is restricted to a certain element/power set, and precision is demanded. Granted, these stages function as advanced tutorials for new moves; if you can master the sprinting jump trial, you’ll be fully adept at using it in the “real world.” But the trials don’t hold back, and you’ll likely die often before you’re ultimately successful.

“…foes will wreak havoc upon your best laid plans.”

While these are technically optional, they become somewhat required in order to fully develop Eve and Smelter’s powers, using the medals you obtain. I began to brush them off at one point, only to regret that I didn’t have the means to upgrade her powers when those nodes became accessible. You can dodge the trials, but you won’t be at the height of your power, and you’ll miss some valuable training.

The third mode is a top-down strategy mode where you control Smelter as he hovers over his empire, rebuilding it and ordering minions around. This is a fun distraction from the main action, for the most part. At its best, it is involved enough to warrant its existence, while not being so deep that it truly detracts from the rest of the experience. Don’t think the challenge will take a break either. Until you subdue a region of the map, and develop your forces enough, foes will wreak havoc upon your best laid plans.

That being said, at times I really would have preferred to stay immersed in the action. Moving Smelter around the map is somewhat tedious, as is waiting for your Zirm troopers to plod their way to their destination. Smelter can shoot in this mode using the right stick, but the aim is weak.

There’s almost a fourth game mode, a mini-game of sorts based on the strategy mode. Before certain stages can be accessed, Smelter must clear the way in an overworld shooter. Unlike the strategy segments, I found this part detracted from the whole, and couldn’t wait until I’d cleared the final screen.

This brings me to my main sticking point with Smelter: pacing. Considering the three different modes at play, the game juggles its priorities pretty well. The transition from action to strategy is, for the most part, intuitive. But sometimes I would get hung up on a particularly annoying trial, and upon clearing it, I’d come to the stark realization that I’m only 1/4 of the way through this actual stage, with two other trials to potentially find, and a world of hazards between me and the next stopping point. Sometimes a challenging segment just needs a save point for a scrap of mercy, or a trial will go on for a screen or two too long, and replaying those segments feels like salt in the wound.

There were also a handful of bugs that halted my progress—but these have been squashed since launch. To the team’s credit, these issues are being addressed promptly.

Difficulty and qualms aside, Smelter really is a lot of fun. I haven’t enjoyed such a challenging game so much in a long time. Its writing is genuinely funny, or at least clever and quippy enough to move things along. Given the genres at play, the story is not the most immersive; I would have liked to see Eve get more genuine development, and something more done with the unique Eden-based story hook.

But the presentation makes up for shortcomings in other departments. The retro art style is beautiful, sitting alongside the likes of Scott Pilgrim Vs. The World in terms of modern sprite work, and the music is electrifying. It is retro in all the right ways, tempered with modern sensibilities, and I was grinning almost all the way through, when I wasn’t cursing under my breath.

Smelter takes a handful of conventions and turns them into a near-masterpiece of the action-platformer genre, but like the retro games that inspired it, it doesn't pull any punches.
REVIEW SCORE
8
File Under: Nintendo Switch, PS4, Xbox One