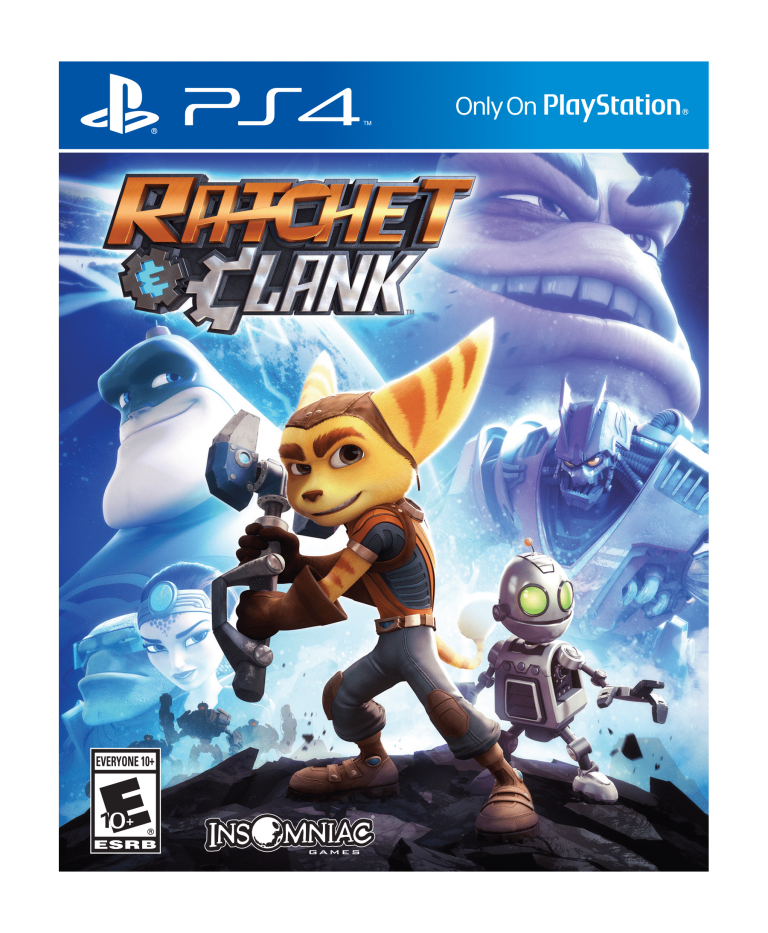 Ratchet & Clank is a game based on a movie based on the original PS2 title from nearly 14 years ago. While many may think of this as a remake, it serves and plays more like a reboot. Either way, whether you’ve played the original or are new to the series you’ll find plenty here to love.

Ratchet & Clank plays a lot like Crash Bandicoot if the latter took place in wide-open levels with guns. You’ll either be flailing wildly with your giant wrench to kill enemies and smash boxes or blowing them up with your considerable selection of firearms.

While there are planets in the game that was also in the original, they’ve been tweaked and updated to feel fresh. As well, the arsenal of weapons comes from all across the previous titles in the series, not just the original. New to the game are plenty of beautiful cutscenes brought directly from the movie (releasing later this month). The graphical differences between a scene from the movie and a cutscene made for the game can be a bit jarring, though not enough to detract from the experience. Additional planets, secrets, and another Star Fox-like flying section have also been added to the mix.

While the level objectives are mostly linear in nature, there are branching paths in each level for optional objectives that reward players with content like different skins, colour filters and cheats like infinite health and ammo, though you’ll have to work hard for those. Every level feels fresh, and even the optional objectives are rewarding and fun enough to be worth your time.

Since this is a reboot and not a re-master, the graphics have been redone from the ground up, and they are beautiful. Colours pop off the screen in what is the most visually vibrant game since Knack. While Ratchet & Clank is easily one of the better-looking games on the PlayStation 4, getting used to the motion blur when panning the camera is a bit overwhelming at first. However, I was able to adjust to it after just one level, and it didn’t distract from the experience.

If you’ve ever seen Stars Wars: A New Hope, then you’ll be familiar with the story here: a young mechanic dreams of bigger things before coming into contact with a lost robot on a quest to save the universe. Many scenes feel ripped straight out of A New Hope quite purposefully, with effects made to look nearly identical. I don’t think it’s bad; just don’t expect a revolutionary story or much in the way of originality. Worst of all, the only real twist in the story is given away in the opening cutscene, making the reveal later in the game obvious.

The entirety of the game takes just over 10 hours to complete, but those that like to find every collectible will be able to get a bit more time out of it. Once completed, a new game plus challenge mode unlocks that allows you to play with all your currently unlocked weapons as well as further upgrades that are only available in challenge mode.

Ratchet & Clank is the best mascot action platformer game since the classics era of Spyro the Dragon and Crash Bandicoot on the original PlayStation, and at the budget price of $39.99 it is easily recommendable for those looking to relive those days.

Whether you're a seasoned Ratchet & Clank player or if you're new to the series, this one is well worth the budget asking price.
REVIEW SCORE
9
File Under: Insomniac Games, PlayStation, Ratchet & Clank, Sony