In Space We Brawl: Full Arsenal Edition (Xbox One) Review 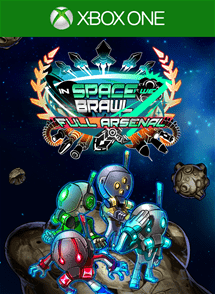 Perhaps the best way one could describe In Space We Brawl is “Geometry Wars, but slow and boring.” Without a doubt, this is a game that feels very intent on capturing the sense of frantic twin-stick shooting that Bizarre Creations nailed back in the mid-2000’s. The bright splashes of colour, the thumping electronic music, the core gameplay itself—all the components of that beloved franchise are here.

The only difference? Nothing that In Space We Brawl has on tap comes even remotely close to feeling as smooth, polished, or, most urgently, fun as other, better twin-stick shooters. This becomes readily apparent when firing up your first few matches. Pretty much all of the ships control in a similar fashion, and none of them are as responsive as you’d like. Weapon control feels loose and imprecise on top of this. The result is a shallow collection of competitive matches in which players clumsily glide into each other, hit various debris, and send their shots firing off in every direction but their intended one.

It doesn’t help that the presentation is thoroughly lazy and uninspired. While, in theory, a robotic fish with a plasma sword cutting through a space ship is wacky in all the right ways, In Space We Brawl’s flat, dull sprites, same-y arenas, and unflattering colour schemes somehow make it drab and dull. A good portion of the ships also look the exact same, meaning that it’s sometimes a task in and of itself to figure out what you’re controlling. All the while, generic, repetitious dubstep pumps into your ears and downright grating announcers comment on everything. It’s a disorienting and frustrating experience across the board.

Also frustrating is the lack of content. Yes, there are a healthy collection of ships and assorted weapons, some of which are interesting in theory. Yes, there are eight maps, each with three sizes and difficulty levels. Yes, there are three distinct modes of competition. But when all of those ships and maps look the same, when only a few weapons are worth using, and when all of the modes pretty much have the same objectives, it starts becoming clear how shallow In Space We Brawl really is. There’s not even an online mode.

There are, however, bots and a series of challenges, but none of these add much to the experience. Playing with bots just means that the AI controls the ships far better than any human could. Plus, it means playing more of the game itself, which isn’t exactly an enticing prospect. We also have “challenges,” which are glorified tutorials with lame attempts at humour, and will really only last around 30 minutes to an hour, if even that. It also demands players to do precise things, like deflecting shots and steering missiles, that you’ll never actually do in the multiplayer, thanks to the frantic nature of the game itself. Basically, if you’re a solo player, you can pretty much write this game off entirely.

All others most likely can too, because as it stands, In Space We Brawl is a pretty low-rent game across the board. Nothing here is outright broken, true, but there’s also nothing especially noteworthy. It’s simply another generic 2D shooter in a market overcrowded with them. The few novel things brought to the table are squandered with lacklustre gameplay and downright awful aesthetics.

there’s pretty much no reason to buy In Space We Brawl
REVIEW SCORE
5
File Under: