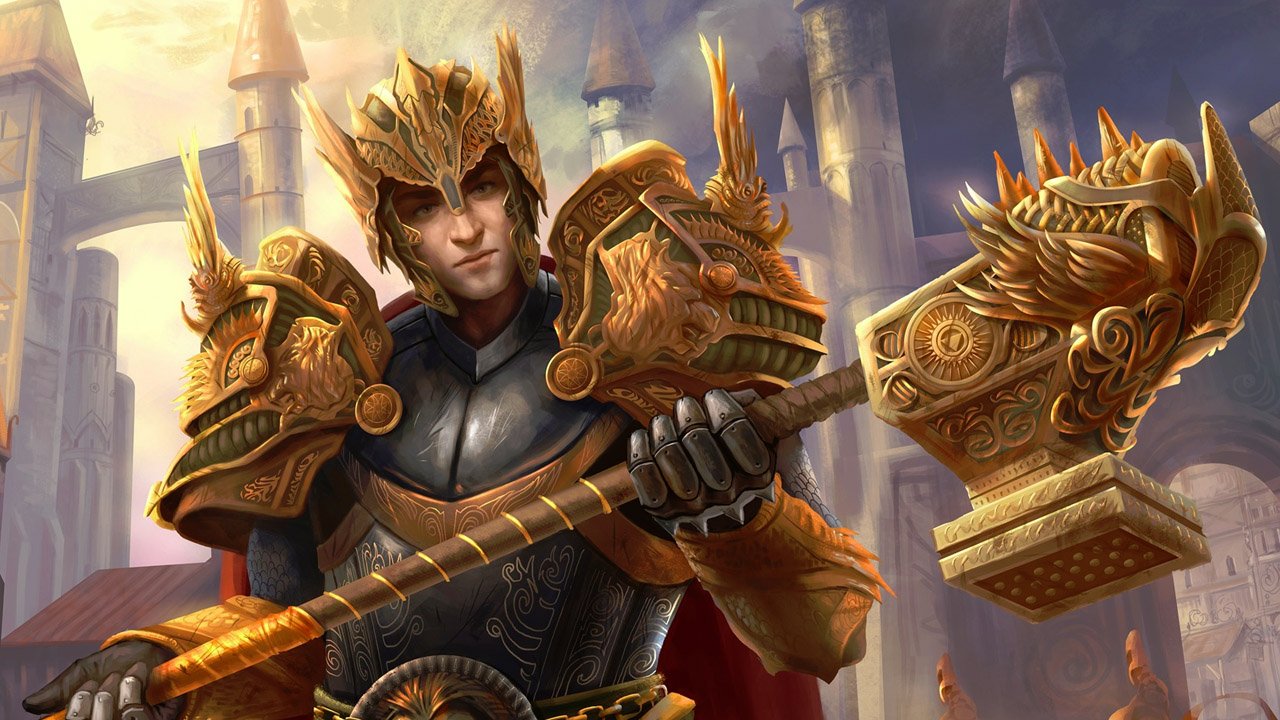 When Magic: The Gathering pioneered the trading card game genre more than 20 years ago, it got a shocking number of things right. Its living legacy is enormous. However, games that followed, such as Pokemon, Yu-Gi-Oh!, SolForge, Lords of Vermillion and Hearthstone, all proved you could do more than iterate on the originator. Spellweaver doesn’t bother.

The game is incredibly derivative. This is partially by design—the company’s promotional materials said they intended the game to be “Hearthstone meets Magic: the Gathering”—but the blatant thievery is too much.

From Hearthstone, the game takes heroes, the Spark of Initiative (The Coin) and shield tokens (divine shield). Practically everything else is lifted from Magic. Five of the six card “aspects” are direct analogues to Magic’s five colours of mana. Order is White and features soldiers, angels, plains, defensive cards, and armies. Wisdom is Blue and features science, islands, ice, and controlling cards. Corruption is Black and features demons, zombies, weakening spells, and uses the discard pile (called the graveyard, as in Magic). Rage is Red and features goblins, dragons, fire, direct damage, mountains, and aggressive strategies. Nature is Green and features forests, elves, beasts, and combat tricks. The new addition to the gang is Dominion, represented by the colour purple. Fittingly, it has the least coherent identity, but has a discernible focus on nobility, slavery, and short-term power at the cost of long-term decay.

Not everything lines up 1-to-1 with Magic—for instance, Wisdom uses a very fun energy mechanic to manage utility creatures and charge up big monsters—but the appropriation is shocking. Almost every major mechanic from Magic has been ripped and renamed. Unstoppable is trample, swift is haste, ranged is first strike, deadly is deathtouch, lifebound is lifelink. Zombie tokens have two power and two health. Players start at 20 life. The list goes on.

Yet the deeper problem is that Spellweaver fails to distinguish itself from either Magic or Hearthstone in any successful ways. The story is mostly stock fantasy fare and not especially deep (the aspects are separated, for instance, into “good” and “evil” sides). The flavour text is dull. And Spellweaver’s big mechanical additions each have problems of their own.

Confusion in the Ranks

The biggest of these is speed. A creature cannot attack or block an opposing creature that’s faster. This is fine on its own, but in combination with some very convoluted blocking mechanics, it ends up turning packed boards into a nightmare to understand.

Imagine an opponent’s creature is attacking one of yours. Another minion under your control could move in to intercept, taking on the attacker instead. You could also use additional creatures to gang up, but for reasons that are not entirely clear, the initial target can’t stay and join in. It has to fight its attacker solo or sit out combat entirely. So when your opponent sends in multiple attackers with different speeds at different targets with any number of special abilities mixed in, it’s very hard to understand what you can do in response, let alone what you should do. Rather than adding strategic depth, these changes turn already complex situations into a headache.

A new mechanic that does shine is the support line, where creatures can be moved to be protected from enemy attacks (but not spells). This is where you hide your weak utility creatures as well as some forces that can attack from the back row. It’s a simple addition that works well with the game’s combat. Lastly, there’s also a series of cards that give your hero new abilities for the duel, which work fine but aren’t an especially ground-breaking addition to the trading card game formula.

The game does a poor job at explaining all this. The tutorial is woefully inadequate. Several of the above mechanics are left totally unexplained. So is the Divine Offering button, which allows you to, once per turn, discard to peek at the top few cards of your deck in search of resources. This helps you avoid futile games in which you don’t draw enough resources or resources of the right type. It’s a great mechanic—if you know it exists. (The button is actually missing during the tutorial.) This is in addition to some annoying bugs. For instance, normally the tutorial rewinds if you don’t follow it correctly; however, at one point it allows you to lose a creature required to progress and gets trapped in an unfixable reset loop.

Attempts at streamlining seem to do more harm than good. While Magic allows you to respond to nearly every play an opponent makes, Spellweaver seeks responses only during combat and at the end of your opponent’s turn. This feels arbitrary and frustrating, as a creature with an activated shield ability can react to save itself in combat but not in response to an opponent’s spell.

Furthermore, a lot of critical information is kept from the player. Experienced opponents and the AI will blast through moves in rapid succession, never pausing, giving you no time to process what is happening. A simplified log of cards played doesn’t always give you the data to piece it together afterward.

One card, Path to Transcendence, is especially problematic. It temporarily removes creatures from play and returns them later with a bit of extra power; however, if you didn’t see which one was removed, your only clue is a tiny thumbnail of the creature’s art—no name, no stats. You would have to recognize the scrunched image and remember the creature’s attributes by heart in order to make intelligent decisions. Concealing what should be open information is a real problem for a strategy game.

Not everything is a total loss. The card art is of generally high quality, even if it lacks character. The music does its job. (The sound mixing, however, is terrible, with many effects far too loud and some spells lacking sound effects at all.) A renewable series of quests give you goals beyond just grinding through games. There’s a draft mode that’s easy to pick up and play.

Surprisingly, the game’s greatest strength may be its free-to-play model. Winning or losing gives you a reasonable amount of in-game currency (although at the time of this review, a bug was increasing the amount received) as well as fame, which gives you rewards at regular intervals. Plus, later on you can unlock a crafting system, allowing you to turn your hoard of extra commons into copies of any card you already own.

Were these practices applied to a fresh and engaging title, it would really be something to applaud; however, they only manage to make it more convenient to play a simulacrum. As it stands, there’s really no reason to play Spellweaver over its competitors, even in the free-to-play sphere.

File Under: Free To Play