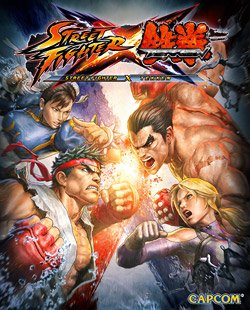 After a hiatus of ten years, the fighting game genre surged into the spotlight four years ago when Street Fighter 4 came out.  When you look at the current landscape of fighting games, it’s easy to see we’re well into a fighting game revival. The latest creation of Capcom’s Renaissance man, Yoshinori Ono, is the crossover title Street Fighter X Tekken. Capcom is no newcomer when it comes to crossovers having years of experience with their “VS.” Games featuring SNK, Marvel and the Tatsunoko characters. The issue with this new game was never going to be a question of expertise, but of execution. Street Fighter and Tekken are both important and well-established franchises, but are these two franchises like chocolate and peanut butter? Are they two great tastes that, ultimately, taste great together?

Evolution of a series

Firstly, don’t let the title of this game confuse you – Street Fighter X Tekken is solely a Street Fighter game. With six buttons for controls, 2D environments, and Hadokens, SFxT is a turbo charged Street Fighter game that will meet all expectations of the long established series – initially. The modified Street Fighter 4 engine SFxT runs on is mostly smooth, but entirely beautiful. The cast of characters is gigantic, the story is better left forgotten, and there’s extreme gameplay depth with a new juggling system tastefully borrowed and modified from the Tekken series. Visual effects are off-the-wall and leave you feeling the excitement and tension that is needed in a fighting game.  The juggle mechanic keeps intensity high with long running combos more commonly seen in Marvel Vs. Capcom; and the anxiety of having to switch out characters, while not opening yourself up to punishment keep you on the absolute edge of your seat.  Local multiplayer with four people on two teams is unlike any fighting game experience I’ve had. At its very best Street Fighter X Tekken is a feature packed title that tries very hard to please, and for the most part does.  At SFxT’s worst it feels like a game that is just missing its final polish, and stumbles because of it.

While drawing heavily from SF4, Street Fighter X Tekken tries hard to stake its claim to an original (albeit still Street Fighter inspired) fighting game experience. Unfortunately this can leave fans of the Tekken series alienated.  The Tekken characters feel more akin to Tekken character models wrapped around fighters that basically act like archetype Street Fighter combatants. The new additions to the fighting engine largely revolve around how you’re now fighting on two person teams.  New combos and super arts take advantage of this and often have combos involving both combatants.  Madness ensues quickly, and things get very flashy and exciting, very quickly.  Those accustomed to the bread and butter mechanics of other Capcom fighters are in for a steep learning curve that will be very unrewarding until fundamentals are ingrained in muscle memory.  But to those looking for a more casual experience, it’s all tremendously satisfying.  For everyone else, problems quickly arise when you realize that all this ‘flash’ feels like a thin coating for mechanics that, while diverse, are ultimately one-dimensional in their requirement for juggling.

Bugs (both mechanical and gameplay wise) and bad development choices are abundant and while I feel it is too early dub SFxT broken, I feel it is fair to say that overall, it’s little underwhelming. The character customizing gems were added to give the game an air of creativity, and initially they do. While the gems work in theory – the mechanic suffers from flaws in practice. Optimal gem configurations are eventually figured out and leave you with only one ‘competitive’ choice. On-disc DLC being charged for doesn’t feel fair, and Xbox 360 users can’t play two player team games online on the same Xbox – an issue that Capcom has stated will not be addressed in patches. Poor choices in menu design result in unnecessary waits for matchmaking and a need for players to be booted back to a multiplayer lobby just to hit the ‘ready’ button for another fight. Major network bugs involving sound effects and character specific ‘glitches’ that create a definite caste of character tiers all lead to a tainted experience that, despite being visually stunning, is already treading a thin line between novel and novelty.

I criticize because I love, and at the end of the day Street Fighter x Tekken is a very good game. I experienced something new. After a personal ten years of throwing Hadokens and mashing out Shoryukens, something new is exactly what I expected and wanted from SFxT.  It feels really nice to have something that is so different I struggle to understand it – yet feel so familiar I was able pick it up and not feel frustrated.  My only wish is that we should have had this rough around the edges gem sold to us after its final polishing. Now we’re left having to wait until the eventual, and almost assured, Super Street Fighter x Tekken is shipped out for the fighting game community to get excited about.