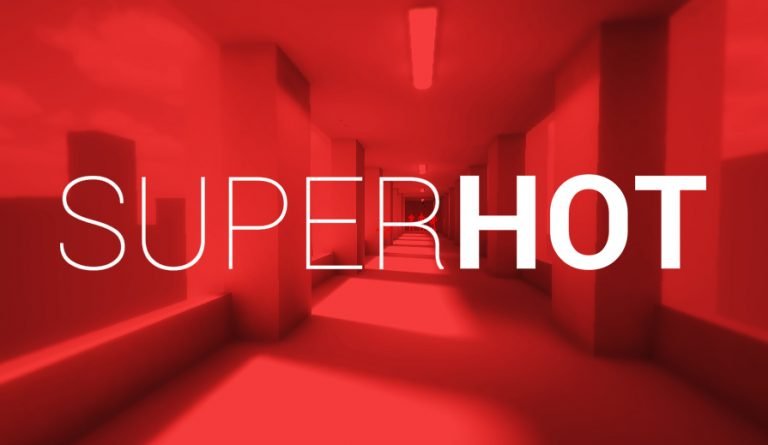 Hi [FRIEND_NAME_HERE], you have to play this game. I’ve never seen anything like it before.

I’m going to come out with it up top: It’s the most innovative shooter I’ve played in years.

… I didn’t type that either. What the heck is going on here?

It’s true, though; even if SUPERHOT isn’t a game that I’d qualify as a shooter, per se. While it is played from a first-person perspective, and it does involve plenty of shooting, it’s much more akin to a puzzle game than an FPS. There’s considerably more focus on positioning and problem solving than there is on reflexes or hand-eye coordination. It’s this element (and only this) that really reminds me of classic shooters like Doom, where your route through a level was more relevant than your ability to shoot.

Aesthetically, SUPERHOT is a beautiful game—someetimes less really is more. Little details like how the crosshair rotates into place between shots to notify you when a gun is ready to fire are simple and elegant solutions to an unusual problem. The untextured world and low-poly models are both slick to look at, and poignantly relevant to the plot of the game. Oh yes, there is, in fact, a story here—and it’s awesome (albeit brief). But let’s be honest, the game is much more about spread the system than… The game is much more about *clears his throat* spread the… The game… The game is much more about the clever freeze-time mechanics than anything else. Time only moves when you do, which allows for some serious choreography in the gunplay. The Wachowskis would be proud.

Having said that, the game plays much more like Agent Smith than Neo—and that’s totally a good thing. Once you attain the ability to body-swap into an enemy… oh man, do things get weird. The first time you manage to shoot yourself in the face, you’ll probably come to the same realization that I did: The mind is software. *sighs* What I meant to say is that my body is holding me back. Well, that’s close enough, I suppose. The limits to the awesome do seem to be absent— SUPERHOT is endlessly cool, and a total mind job.

Aside from telling a story, each of the levels introduces new mechanics and builds upon the last with increasingly more elaborate (and cool) shootouts and brawls for you to take part in. And thanks to the built-in replay editor and the ability to seamlessly upload them to an online database (sadly not online yet during my review period) for viewing and sharing with friends, your experiences in this humble puzzle game will make you look like a bad mother-fudging action star when played back in real time. On top of that, the “Endless Mode” that’s unlocked upon completion of the story offers a skill-testing challenge that’s perpetually entertaining, as do all the challenges that come with it.

For something that started as a GameJam project, SUPERHOT has done an impossibly good job of illustrating the opportunities for innovation in gaming. It’s the kind of game that, had I access to it as a teenager, would have had me laughing and high-fiving friends until all hours of the morning as we found new and interesting ways to beat up, bash, slice, and shoot enemies. As it stands, I’m perfectly happy to enjoy it as a thirty-year-old that’s been reminded of all the reasons why he fell in love with video games as a young boy. SUPERHOT is not only exciting and cool as hell, it’s one of the best workouts my brain has gotten in a shooter in years. Its necessity for situational awareness and positioning has made me an even better FPS player in other games to boot.

Truly, SUPERHOT is a game that everyone simply must play. Not only does it innovate in fresh and exciting ways: stimulate like a puzzler, exhilarate like a shooter, and ponder like an existential explorer, it shows that it doesn’t take AAA assets to break the monopoly on top-of-the-class gaming.

I’ll send you over the crack; just run superhot.exe.

SUPERHOT isn’t a game that I’d qualify as a shooter, per se. While it is played from a first-person perspective, and it does involve plenty of shooting, it’s much more akin to a puzzle game than an FPS.
REVIEW SCORE
10
File Under: Epic Games, FPS, Shooter, The Matrix