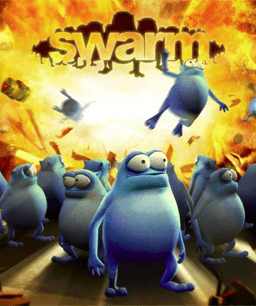 Hothead Games spent most of 2010 bringing us multiple versions of DeathSpank, but that particular development chapter is closed and Swarm, the studio’s latest project, yields far more disappointing results. Swarm simply lacks focus, so while there are plenty of interesting ideas it never amounts to anything coherent.

The basic premise behind Swarm is simple. You control the swarm, an amorphous blue mass composed of fifty independent swarmites, and your goal is to platform your way to the end of each stage while racking up as many points as possible. Points come in the form of collectible pink molecules, and you can build up a multiplier if you grab a lot of molecules or kill a lot of swarmites in succession.

While you’re able to tell the swarm where to go, each member is a discreet entity and they’ll interpret your commands as nothing more than vague suggestions. Swarmites will get stuck behind walls and will occasionally wander off in no particular direction, so it actually feels like you’re controlling a horde comprised of fifty individuals instead of a single blob that’s been animated fifty times.

It’s an impressive AI accomplishment, and it’s also a surprisingly entertaining gameplay mechanic that lends itself to a number of intriguing possibilities. For instance, you can tell the swarm to spread out or form a cluster, build a swarmite tower, use the swarm as a battering ram, and even split the swarm into two groups so that one can take the high road while the other takes the low.

The swarmites have the survival instincts of so many blue lemmings – they’ll die if they touch anything – but the developers have taken that into account and it’s easy to appreciate the potential for the concept. You can press forward as long as one swarmite remains, which means that the swarm is at once your health bar and an expendable resource and some obstacles can only be cleared if you’re willing to make a sacrifice.

The problem – and it’s a serious problem – is that Swarm lacks the deft touch needed to bring all of its contradictory design elements together. It’s the sort of game that forces you to slow down in order to speed up, and the counterintuitive give and take permeates every aspect of the design. You’ll earn medals for finding spectacular ways to die, but that’s also a good way to guarantee that you won’t complete your objectives.

It’s frustrating, because it feels like Hothead has built a game that’s at odds with its own AI. Even though Swarm only cares about points, the mechanics are well suited for a standard move-right-to-win platformer and there are a couple solid boss fights and numerous segments that require some serious skill. Making it to the end of a stage will often feel like an accomplishment.

Unfortunately, the game won’t necessarily agree. The points threshold needed to advance to the next level is often set so unreasonably high that it becomes a way to arbitrarily withhold content until you’ve replayed each level half a dozen times. As you’d expect, that makes for a rather tedious experience. Most people will get discouraged at Stage 3, and there’s no reason to keep playing unless you’re obsessed with leader boards.

There’s also no story, so those entry barriers disrupt the usual work-and-reward payoff that defines most games. You need extreme multiplier boosts in order generate the necessary points, but once an item is gone, it’s gone forever, so there’s no way to recover a multiplier once it’s worn off. Passing through one of the many mid-level checkpoints is ironically one of the fastest ways to lose a million points if you can’t stay alive until the next one and it can lead to a bizarre gameplay limbo in which it’s impossible to unlock the next level.

Games with no win condition obviously aren’t much fun, and Swarm exacerbates the issue with some severe technical deficiencies. The jump mechanic doesn’t work – the same button combination will often lead to two completely different outcomes – and the controls aren’t tight enough to allow you to do anything with any reliability. The level design mocks the very notion of depth perception, and the landscape seems to change as frequently as the whims of the swarmites.

Swarm is also an excessively busy game, and the clutter makes it even tougher to figure out what’s going on. Some of the later levels will send you through gauntlets lined with explosives and traps, and once the first bomb goes off there’s no way to distinguish the living swarmites from the blue paint stains and miscellaneous debris. You’ll try to move forward only to discover that every single swarmite is dead and you honestly won’t know how it happened.

Swarm is ultimately too difficult for the casual player and too random for the hardcore fan, and skill will only take you as far as the end credits. If you’re planning to assault the leader boards – and Swarm is all about the leader boards – you’re going to need a lot of luck. All of the collectibles will have to bounce a certain way and you’ll have to avoid all of the out-of-nowhere instant deaths that render fifty lives irrelevant.

Despite the flaws, however, Swarm is at least consistently funny. The cartoonish gallows humor begins on the title screen when the capitalized DO NOT PRESS warning leads to predictably comical results, and there’s no denying that the swarmites are delightfully squishy. There are plenty of amusing ways to turn them into discarded jelly donuts.

That charm just isn’t enough to carry an entire game. The various elements don’t hold together, so Swarm adds up to less than the sum of its parts and the resulting mess isn’t much fun to play. It might appeal to people who like speed runs of Battletoads, but that’s a fairly limited audience and I can’t recommend it even for $15.

The various elements don’t hold together, so Swarm adds up to less than the sum of its parts and the resulting mess isn’t much fun to play.
REVIEW SCORE
6
File Under: Platformer, PlayStation