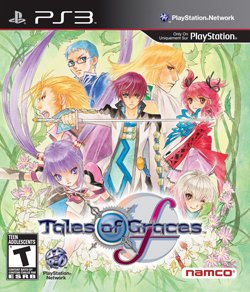 A Story Of Tradition

There aren’t that many “good old JRPGs” out there anymore, but the Tales series from Namco’s Tales Studio—now defunct and absorbed into Namco proper, by the way—has always clung stubbornly to the idea that their formula was cut from a cookie that the audience would be happy to eat up again and again. In light of Square-Enix’s innovations in gameplay at the cost of a compelling story, they might actually be right. Tales of Graces f isn’t going to win any awards as a work of technical genius, but as a cliché ridden yarn that you can’t help but feel guilty for enjoying, it’s a resounding success.

Wii Are Moving To Another Console

Tales of Graces f is actually a port of the original Tales of Graces that debuted on the Wii in Japan back in 2009. It eventually got a PS3 port a year later and that Japanese port has now been localized for Western consumption. It’s a puzzle why Western Wii owners are getting snubbed on the original Wii version, but then they get Xenoblade, so I suppose it all balances out karma-wise. This localized version also includes a number of extras from the PS3 port, including the extra “mini-JRPG” epilogue called Lineage & Legacies, which adds another 10+ hours to the experience.

The story for ToGf is about as generic as it gets. Asbel Lahnt, the plucky young hero, is full of confidence at the start of the game but gradually undergoes the necessary process of needing to be stronger in order to protect the ones he cares about. There’s also an amnesiac orphan with a special destiny, and of course, one can’t have a JRPG without the required cheese that is known as The Power Of Friendship™. It’s all here, relentlessly checking one box after another on a typical, cliché plot, but it’s executed with so much heart and sappiness that it ultimately manages to succeed despite itself. The characters may not be original, but as the hours pass, they will become damn likable; even Asbel’s staggering naivete will become less offensive in time.

Getting into the technical specifics, it should come as a surprise to no one that a Wii port—even an HD one—is not going to compare favorably to the PS3’s benchmark titles for graphics. The anime aesthetic is a somewhat simpler one to begin with, and the Tales Studio decided to go with a softer, almost pastel look inspired, apparently, by water color paintings. Valkyria Chronicles is a much more successful example of this, but you can still see a more painterly, illustrated influence in the art direction of ToGf. One happy bonus of this game not exactly taxing the PS3 is that the performance is very, very stable. Combat—which is real time, not turn-based—uses a lot of flashy effects for the special/magic/”Cryas” attacks and the light show can get pretty ridiculous. The engine never falters, regardless of how hectic combat is. The fixed nature of the camera (yes, this are really old school JRPG conventions we’ve got going here) also keep players from experiencing draw-in and pop up most of the time, something that not even the sequel, the only-currently-available-in-Japan Tales of Xillia cannot claim. The audio side of things is about what seasoned JRPG veterans would expect at this point. Once again, Western gamers are cruelly denied the ability to switch over to the original Japanese voice acting if they so choose, but the cast of dubbers for this localized version, consisting of old anime mainstays like David Vincent and Laura Bailey—who, by the way, played Serah Farron in Final Fantasy XIII-2—do a good job of bringing emotive performances to what amount to stock characters with some occasionally generic dialogue. Musically, Motoi Sakuraba continues his streak as the mainstay composer for the series, and while his compositions continue to not offend, they also fail to attain the memorability of Nobuo Uematsu at his height. To be fair, even Uematsu doesn’t do this these days. The audio effects themselves are functional, though lack the richness and “oomph” of other titles. Part of this is the fixed camera aspect of the game not really lending itself well to surround sound. That doesn’t really explain why the bass is more restrained, as there are plenty of magic spells to go around that could really make use of booming thunder and explosions, but don’t. Curiously, the audio feels more robust when the theme song is playing during the opening intro before the title screen, but in-game, it lacks this same presence.

The Tales series, has, by now, established itself as a sort of Dynasty Warriors for JRPG enthusiasts, not really varying dramatically in mechanical terms, but providing a safe, familiar experience by doing so. And in an age where the traditional JRPG is in short supply, this is actually a great boon to the fans. Make no mistake, in many mechanical aspects, Final Fantasy XIII-2 did some interesting things, bringing back more open dungeons, tweaking the leaner, meaner ATB system, and introducing the Pokemon-like aspect of capturing monsters and using them as a 3rd

party member. But it all came crashing down because the mechanics didn’t support characters, or a story, worth caring about, and made the dangerous choice of ending on a cliff-hanger that undid everything accomplished up to that point.

Tales of Graces f is the complete opposite. Mechanically, this is similar to the tales games played previously. The “LiMBS” system, a real-time combat system that locks players to one target and allows the companion NPCs to act independently, has received the expected tweaks. It’s not as dramatic as the move from the Gambits system of FFXII to the ATB system of FFXIII, but it adds two different combat styles—in the form “A Artes” and “B Artes” –that players can switch between at will, even stringing combos together by mixing the two. However, it’s still essentially the Linear Motion Battle System players know, and it doesn’t take long to get familiar with it and start testing its nuances. The other mechanics are pure traditional, from the towns with NPCs, side-quests, and inns for resting to the air ship that allows travel all over the world as the game nears its end. And of course, there are the optional bosses that require a fair amount of grinding and skill. In many ways, this is a classic JRPG that resolutely refuses to march into the 21

As a result of not taking all those chances, what players are left with is a tasty—though perhaps not particularly nutritious—serving of pizza or potato chips. This is comfort food, complete with some of the irritating backtracking that the genre is known for, but when you haven’t had that experience for a while, it can still be a welcome addition. Also making a return is that staple of the Tales series, the lo-fi, minimal budget “skits” that can pop up at any time, cutting to some illustrations of the various characters as they interact with each other over everything from the seriousness of their next objective to the naivete of their fearless leader. Despite the fact that all we’re looking at are some drawings with some voiceover work to accompany them, the frequency—and regular hilarity—of these skits does something that the current FF games do not; they give enough breathing room to develop the characters. Rather than shoring up character defining moments for high production cut scenes, ToGf intersperses these character moments at frequent, unpredictable intervals. The result is a less compressed narrative experience, similar to a novel, that lets players bond with the characters over time, rather than the more cinematic presentation of modern RPGs that normally doles out character moments at rarer intervals.

The other aspects of Tales of Graces f are the things we’ve seen before. The items and item menu are standard fare, the crafting system is large and elaborate, and its “dualizing” system will keep players occupied for quite some time. There’s also the addition of the “Eleth Mixer” which gives players a certain percentage chance to spontaneously generate items at the cost of “eleth.” The more valuable the item desired—such as potions that permanently increase skill points—the lower the odds of item creation. The Eleth Mixer can also be used to cook certain helpful food items when specified conditions are met in battle. Nothing here is radical and new, but it all adds to a typically large, comprehensive JRPG experience that is less common these days.

And finally, there’s that extra content. Despite the fact that Tales of Graces f is already a sizable game and ends on a fairly satisfactory note—giving more closure than even Mass Effect 3—the Lineage & Legacies additional content is a playable epilogue that can last an additional 10-15 hours of play. It takes place six months after the events of the original game, and provides even more story, character development and tougher challenges than the base game. There’s also a “trials” challenge for people looking to fight even tougher monsters and get better loot, and on top of all this, a New Game+ mode that opens up a few additional pieces of higher level content.

The bottom line is, for starved fans of big, traditional JRPGs that have that earnestness and intimidating size that is unique to the Japanese, Tales of Graces f is a must buy. It’s not as innovative as Xenoblade, but what it lacks in its evolution of the genre, it makes up for by representing the old tropes extremely well.

Nothing here is radical and new, but it all adds to a typically large, comprehensive JRPG experience that is less common these days.
REVIEW SCORE
9
File Under: Action, Japan, PlayStation, RPG