The Artful Escape (Xbox One) Review

The Artful Escape is finally here with electric guitar saturated glory. Announced back in E3 2017, this platform rock opera-inspired title has arrived, and has brought the gift of nonstop —- I mean NONSTOP — electric guitar, to very artistic platforming sequences and ‘Simon Says’ mini-games for gamers all around.

The beginning of the game sets the stage for the rest of it, we are introduced to a melancholy folk guitar player who seems audibly depressed to the point where he’s trying to make someone notice. This segment has molasses pacing, as you are greeted with a solid folk tune. The landscape is very ‘artful’ and forces you to take in the sights. The depression the protagonist is feeling is of impossible-to-fill expectations of those around him. This plot device is relatable to most people who have titan-esque expectations demanded of them, so the feeling towards Francis is one of empathy and “poor guy.”

The purpose of the game is: you are Francis Vendetti, and you are trying to escape becoming your uncle. Folk legend Johnson Vendetti, in death, left behind a legacy that leaves Francis under a shadow, so much so that the hometown of Calypso is basically shoving him into his uncle’s now empty shoes. With the constant theme being “pshhh no way someone who’s never played a show can be JOHNSON VENDETTI!” in an attempt to inspire the player. Honestly, I found the crippling amount of disbelief over Francis’ abilities during the entire narrative to be cumbersome in some aspects, every single person besides Lightman (introduced later) doesn’t believe in Francis. Even Batman has his Robin, but here you are basically an unfound Dick Grayson after the carnival accident.

The narrative of The Artful Escape is inspired by the growing pains of a teenager who is supposed to live up to ‘cosmic’ aspirations. There is notable satire on yuppie culture in Francis’ hometown of Calypso. A group that is known to be all about ‘skiff’ inhabits the town. Skiff is described as making music by banging on pots and pans. This literally describes noise to me, but I understand where the developer was going with it, somethings are ‘stanned’ very hard by enthusiasts… even if it doesn’t make sense to everyone.

The town is loaded with character, and the residents add weight to the setting. Each character interacts differently with Francis, and there are attempts at humour that usually hit its mark. For instance, the show runner of the tribute Johnson Vendetti show Francis is supposed to headline, has a ‘resting angry face.’ The character assures Francis that he is not angry, but it’s clear to everyone in the room, he’s not happy. These small inserts of character and spontaneity develop the atmosphere further, making Calypso a living place. It doesn’t explain why most people aren’t very kind. I suppose it’s due to each resident only wanting what they want, they want Johnson Vendetti, not his cheap knockoff nephew.

One of the sadder points of the narrative is how Francis has a father that is pictured on his fridge, he mentions how no one EVER asks about him. This treatment from his hometown pretty much begs him to not even try, so no wonder pressing X to play the ‘toils of a miner’ on guitar in the beginning scene was met with an exasperated sigh.

The narrative really kicks into overdrive with a bunch of nonsensical occurrences that treat the player to constant bewilderment at every turn. Thankfully the voice acting is on point from the talented cast, these moments are an absolute slog, and the dialogue happens much more often than gameplay. There lies my largest issue with The Artful Escape, the lack of overall gameplay. To this point of playing, I’ve been in control of Francis for less than half the time, the other half was reading pages and pages of dialogue. A saving grace is that the storyline is good and quite relatable.

A Mars Attacks! alien without the body, appears on screen and says a total bunch of nonsense to Francis. His name is Zomm, and he’s basically a floating central nervous system in a snow globe. This is where the true arc of the game takes place. Throughout the rest of the adventure, a lot of the narrative won’t make sense in many segments. Many statements are randomly thrown at the player, and our identity-crisis-having hero checks each of these with a flourish. Usually after a segment of random dialogue the player is treated to three speech options, which are all fully voiced. While the options might be there to assure the player didn’t space out, none of the options make a difference on the story. The responses to your choices are always the same or too similar to notice the difference, with the story not changing at all.

To immerse the player farther into the game, due to Francis’ identity crisis you are asked to rename him. I named him ‘The Almighty Johnson’ in honour of his uncle. The dialogue sections featuring your character’s new identity are strange, the part with the chosen name is overwritten by a censorship guitar squeal, which pulled me out of the many talking segments.

Arriving on “the Cosmic Lung” introduces the player to my least favorite parts. The Lung is treated as a 2D hub of the game world, which doesn’t offer the player much. Violetta’s workshop lets you see the stock guitar you’re equipped with, but it does nothing. Violetta was introduced in the beginning of the game, and she treats Francis poorly. She also tries to force her ideals on him. She’s trying to inspire him, but due to the entire narrative so far just shoving Francis around, this comes off as antagonistic also. Lightman is another character here, he is the captain of the Lung, and he’s an accomplished guitarist. His design screams Jimi Hendrix, which is a super cool nod to the rock icon. There are numerous references to rock music throughout the game, which were easy to understand, especially when Jimmy Page definitely got his fame from skiff.

This hub world KILLS the momentum of the game. Having to slog through three floors to go to different segments of the ship to engage with more dialogue is tedious. There are reactions from Francis, and the Lung changes over the course of the game due to his exploits, but it remains relatively the same. I couldn’t figure out what the dancing spot in the club/bar section was there for, it didn’t make sense to me.

The stages of the game are absolutely gorgeous. The Artful Escape is aptly named. The art in this title is sublime and the environments, although random with aliens, are a feast for the eyes. The platforming sequences are not difficult, at all. The game allows you to double jump, but the second jump is laughable. Pressing the jump button a second time might as well not work. The way you can jam on the guitar mid jump is satisfying and lurches you forwards, which makes me confused as to why this wasn’t just the double jump, as it actually does something for the player.

“The Artful Escape is aptly named. The art in this title is sublime and the environments, although random with aliens, are a feast for the eyes.”

While engaging in these platforming sequences, Francis sometimes slides through the setting, which is truly the best gameplay this game has. Platforming with timing, and gorgeous backdrops is the definition of a good time. The framerate slows down a little bit when the screen becomes too busy, but it’s not game breaking. Still, it’s unfortunate that the best part of the game happens like this. There are segments with lore the player can read about the universe, mostly Lightman backstory in the first stage.

While navigating the environments the player is encouraged to hold the ‘jam’ button, and it lights up the environment, wakes up extra-terrestrials, and other good stuff. If you have played Super Mario Bros., be prepared to utilize the ‘hold run button’ technique throughout, holding X to continuously jam gives the player more to see in the wondrous world.

The ‘boss encounters’ are a mini-game of ‘Simon Says,’ as you have sessions with larger aliens. These are also not difficult, and halt momentum like the Lung does. The laser light showings mixed with the environments are a sight to behold, but the lackluster gameplay kind of takes away from these segments. During the exploration part of stages there are parts where Francis is frozen in place and a ride takes you through the environment. You can then wail on the guitar to activate more of the background. I didn’t particularly enjoy these parts either, as it didn’t really feel like gameplay, just an art show while button mashing.

The trick of The Artful Escape is that it allows its writing to shine. The engagements with characters during the story arc are meaningful (Violetta comes around), Lightman has soul, and even Zomm is a welcome sight. The hilarious jokes during the narrative had fantastic timing and the voice acting helped delivery hit just the right place. The segment where you are on an alien Jimmy Fallon is a hilarious quip at pop culture, especially with the cues from the studio audience. The narrative truly shines when it’s allowed to be told and the pacing doesn’t stop it, there are genuine laughs and a good time to be had on Francis’s journey of self-discovery. The storyline is the game’s strongest point by far.

The Artful Escape is a unique title that breaks the mold on traditional gaming. The jokes, narrative, acting, and great design choices are really something that should be experienced. The artwork is sublime, every inch of this title scream “I BELONG IN A MUSEUM!” from Calypso’s highest peak. However, the gameplay is easy in its best segments, the pacing is a snail trail, and ultimately there isn’t really much gameplay. The conclusion of the narrative, while satisfying, leaves the player with no real reason to jump back in for a second run. The title works best as an interactive story instead of a game. A true escape should only be achieved once.

The Artful Escape has a stellar narrative with actual good humour enhanced by the voice acting talent and beautiful landscapes, but the gameplay is stale and those who dislike electric guitar are in for a long haul.

File Under: Artful Escape
A retail version of the game reviewed was provided by the publisher. You can read more about CGMagazine reivew policies here. 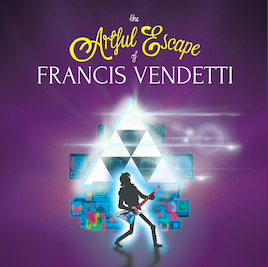