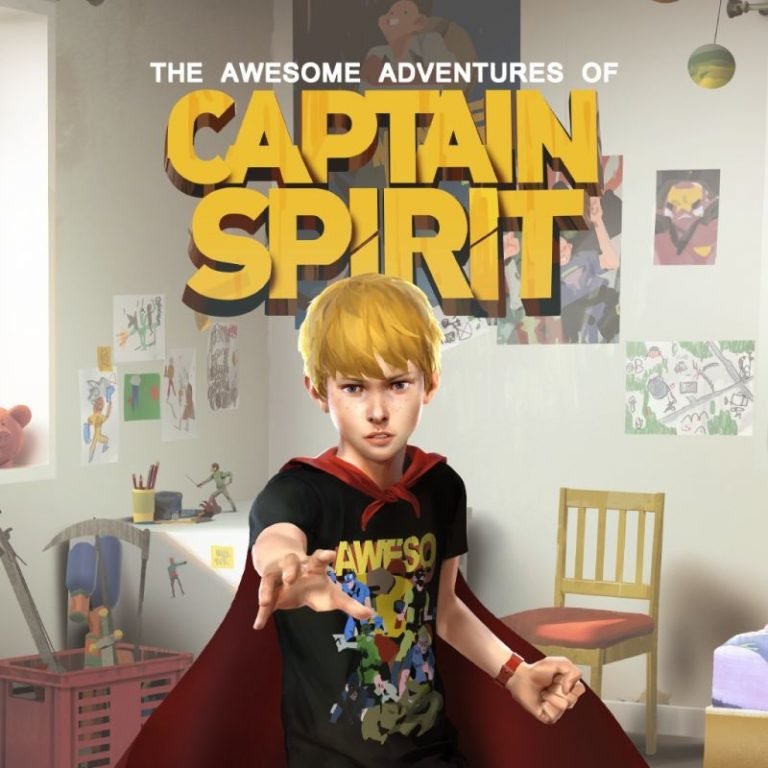 As a prelude to Life is Strange 2, something ostensibly meant to pique one’s interest in the episodic series starting in September, The Awesome Adventures of Captain Spirit certainly does its job. It establishes characters, conflict, dynamics, and its own superpower sporting protagonist, with what feels like a better understanding of how to write characters of a certain age than its predecessor. But rather than focusing on teenage girls, Captain Spirit focuses on a young boy named Chris.

Most of the interaction in the episode is between Chris and his alcoholic father, and the dynamic is tense from the get go. Dialogue options where Chris can either confront his father on his drinking or change topics immediately set me off as to what kind of world this child was trying to navigate. Through a short conversation with Chris’ dad remorsefully asking about how his son’s arm is feeling, and how sorry he is he got hurt, Captain Spirit finds a way to eloquently explore the obvious abuse happening in this home without the painfully on-the-nose Oscar bait of Detroit: Become Human. It manages to capture an oppressive atmosphere through implication rather than explicitly talking about it. Chris’ father is drunk before breakfast, ignoring his son’s requests for quality time, and even if Chris were to escape into the safe space of his bedroom, he would always have the reminder of what awaits him outside in the form of the bruise on his arm.

Chris’ form of escapism from the pain that surrounds him comes in the form of his alter ego Captain Spirt, the leader of a team of superheroes whose world he has meticulously recreated. He treats his chores like stopping villains, uses his treehouse as a secret base for his hero duties, and at one point I had to “stop the beer cans from taking over the city” in the form of a brief but poignant segment of using Chris’ father’s beer cans as a representation of villains attacking the city Captain Spirit is sworn to protect.

Captain Spirit uses a child’s imagination to colour the mundane moments of housework and killing time as well as finding ways to express how this upbringing affects Chris’ perception of the world around him. For me, that’s more than enough reason to be excited for what Life is Strange 2 is going to offer when it begins in September. While we don’t know at this point where the game is going to take place, whether it’s still in Chris’ childhood or in another point in his life, Captain Spirit does pull a Marvel-style “Chris will return in Life is Strange 2” at the end, and I’m excited to see where his story takes him.

Despite the creative way Captain Spirit utilizes Chris’ imagination to paint a picture of how he perceives the world, it does make for some frustrating clarity issues in the way objectives are presented to you. Most of the episode is spent doing housework, and it’s presented in ways that aren’t entirely connected to the actual execution. For example, in order to accomplish a lot of the tasks Chris has to do, you have to complete his Captain Spirit costume. This includes looking for a mask, armour, and a cape. So while I spent a lot of time looking for a mask, little did I realize that I was actually supposed to be looking for a makeup kit to paint one on instead. The quest log in Captain Spirit is made up of a series of drawings, each referring to a task in an in-universe way that makes sense in Chris’ imagined world, but they required a bit of time to really unpack on my end and really grasp what I was supposed to be doing.

Overall, despite some frustrations, I knew Chris, his superhero alter ego, and Life is Strange 2 all had its hooks in me when Captain Spirit ended and my heart sank. In a brief prologue Dontnod sold me on a Life is Strange story without Max, Chloe, and Rachel, without time travel, and without Arcadia Bay. I’m really thrilled at how much Dontnod is pivoting into a new story and setting for this game, and I’m ready to see where Chris’ story takes me.

Captain Spirit’s use of a child’s imagination to contextualize a dark, poignant story sets up a strong foundation to build Life is Strange 2 upon.
REVIEW SCORE
8
File Under: DONTNOD Entertainment, Square Enix