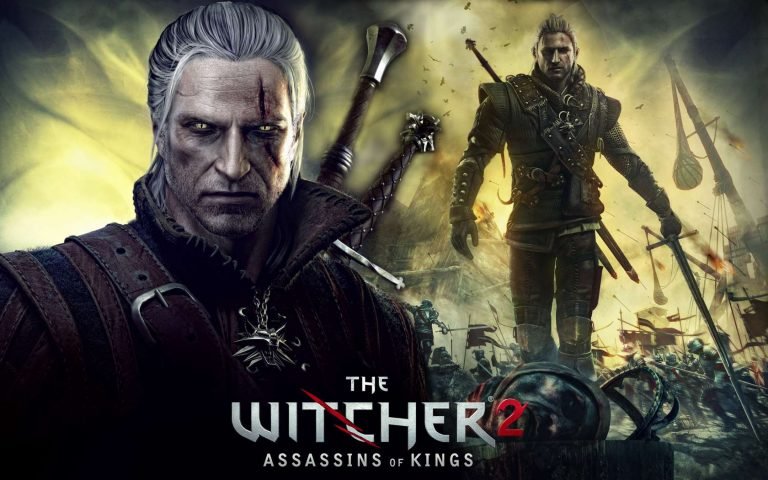 The Witcher 2 is the sequel to (you guessed it) The Witcher, a love-it-or-hate-it 2007 action RPG from ambitious Polish developer CD Projekt. Setting out to right the wrongs of its inaugural release, the studio (now developing as CD Projekt RED) has spent the last four years in making a sequel that attempts to reach the lofty heights promised — and almost achieved — by its past projects.

It has, on the whole, succeeded.

The game stars Geralt of Rivia, a man with terrible luck. He’s loved, he’s lost, he’s died and been reborn with horrible amnesia, he’s a social outcast and, worst of all, he’s been wrongfully accused of killing a king. It’s the sort of stuff that would make most of us curl up in a ball and hide under the blankets — but then again not all of us are genetically mutated, magic-wielding swordsmen.

The mythos, characters and plot of The Witcher 2 are drawn from the fiction of Andrzej Sapkowski and, using the author’s work as a springboard, succeed in eking out their own place within the crowded landscape of videogame fantasy. CD Projekt RED, once again aptly delving into a rich landscape full of ambiguous morality and medieval(esque) political intrigue, present a world that is both familiar and alien to modern audiences through a cohesive visual and aural aesthetic that is among the most impressive yet seen in the medium.

The world of the game is stunning, detail upon detail lovingly rendered in order to create an incredibly life-like setting. The Witcher 2 starts out strong by laying all its considerable cards on the table, throwing the player from a dank, dim and dripping prison cell into the frontlines of a full-scale castle assault. And from the jaw-dropping opening onward it continues to impress. There are moments here that are absolutely unparalleled. The play of sunshine and leafy shadow beneath a canopy of trees, the creak of wood from the inside of a siege tower, the rush of a distant waterfall within a mountain town — little touches like these work to make The Witcher 2 come alive in a way that transcends what audiences have come to expect from videogames. Its soundtrack furthers this effect, hitting the right emotional notes in order to achieve the kind of catharsis that isn’t possible with lesser compositions (the final scene of the prologue highlights this beautifully).

Unfortunately, despite its strength in developing and maintaining a stunning atmosphere, the narrative isn’t always as strong as it should be — a problem that the sequel shares with its forbearer. The Witcher 2, at times, struggles with pacing and often drags on or, conversely, moves through fascinating plot points too quickly. The game’s prologue and first chapter hit a perfect mix of narrative progression and side-quest distraction but, from there on, things begin to slow too much before gearing up into a rapid, exposition-dumping climax and overly hasty conclusion.

While its dialogue and plot are miles ahead of the first game in general quality, The Witcher 2 still retains some of the same awkwardness that comes from this failure to identify or stick to an even pace. This isn’t to say that the plot and characters themselves are not well crafted. They are. It’s just that the best moments of the game aren’t always presented in the manner they deserve to be. CD Projekt RED demonstrates that they are fully capable of crafting tense drama and absorbing narrative pull within the first ten hours of the title, but the climax and ending falls flat.

The Witcher 2 mostly plays very well, matching its exceptional production with a combat system that makes the game a joy to progress through, even when the overarching plot is stagnating or rushing forward too quickly. Complaints levelled at the rhythm-based click-fest of The Witcher have been addressed in the sequel, Geralt now dispatching enemies in a much more fluid and intuitive manner. CD Projekt RED has taken notes from the rollicking brawls and cautious swordplay of titles like Arkham Asylum and Demon’s Souls and filtered a similar fight mechanic through the framework of its own distinctive sword and sorcery setting. Players feel suitably powerful as the story unfolds and they come to grips with the mechanics and, although the system is reminiscent of other titles, it ultimately comes into its own in a manner that fits neatly within the world and characters presented.

The Witcher 2 offers up a beautifully nuanced system that rewards different approaches to conflict. Three main skill trees (swords, magic and alchemy) allow players to adapt their advancement to the style they most enjoy and, combined with a refined crafting system that rewards pre-battle planning, each confrontation in the game — no matter which type of strategy is chosen — is a pleasure to experience.

Problems with difficulty scaling present the biggest hurdle in enjoying the well-conceived combat mechanics, though. There is an unpleasant inversion in The Witcher 2 that makes the opening areas of the game into frustrating trial and error willpower tests (the player is mostly expected to sink or swim with only vague pop-up hints guiding their way) and later set-pieces too easy. All role-playing games are forced to confront the fundamental problem of how to present a steady (yet satisfying) increase in difficulty while also allowing players to grow more powerful throughout the quest. The Witcher 2, while being an excellent example of how to create sublime RPG battle, dialogue and exploration, is unable to solve this common issue properly, leading to an end game that is too easy and an introduction that is simply too hard.

Where the combat issues that plagued its predecessor have mostly disappeared, The Witcher 2’s navigation controls have suffered in their place. The decision to map both the action and attack button to a single, context-sensitive mouse click is a bizarre (and often aggravating) one. Although it’s a minor complaint, having to shuffle from side to side in order to perform common actions (like picking up loot, disarming traps or opening doors) is enough of a pain to make it noteworthy.

The Witcher 2 also suffers from some optimization issues that, near the time of release, have resulted in sluggish frame-rates and generally sub-par performance on machines that meet or exceed recommended system requirements. CD Projekt RED has been working to resolve problems, however, and (just like the first Witcher) the studio/publisher’s commitment to post-release support means that these issues are likely to be quickly resolved.

The mention of so many problems likely makes it seem like The Witcher 2 is not a good game when, in fact, it really is. Apart from its numerous — but never severe — rough patches, The Witcher 2 is a fantastic experience that warrants attention. As is the case with so many ambitious videogames, it’s just that CD Projekt’s release is as frustrating as it is inspiring. Players that refuse to settle for anything less than the typical, AAA level of polish will miss out on a uniquely rewarding and engaging game. Those who are willing to work through its shortcomings, however, are rewarded with a title that can be held up as a paragon of its genre — and something of a blueprint for the evolution of the RPG.

The Witcher 2 offers up a beautifully nuanced system that rewards different approaches to conflict.
REVIEW SCORE
8
File Under: PC, RPG, The Witcher