Action platformer of the year?
SCORE: 9/10 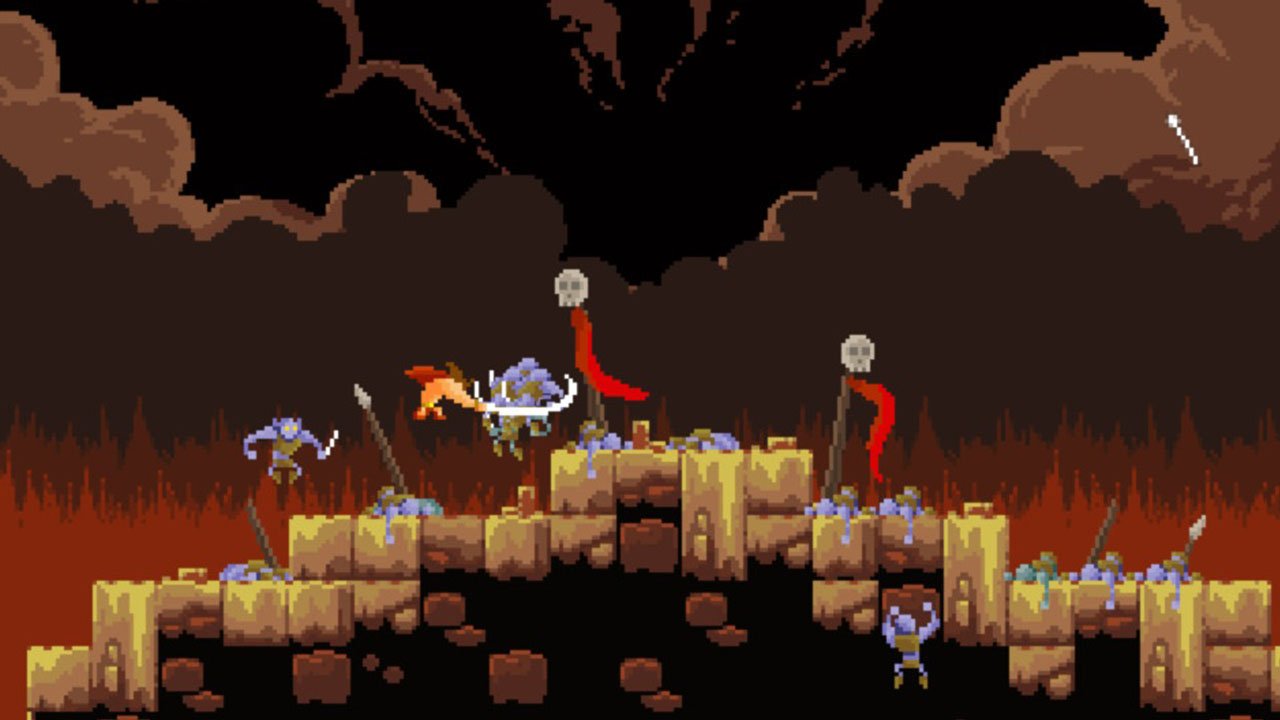 Tiny Barbarian DX is spread out over four episodes, with each feeling nearly like its own entire game. Each episode has its own theme, gameplay gimmicks, and self-contained story; although all the stories are connected, the story isn’t all that deep as it is told visually. Without spoiling too much, episode two has a few moments where you ride a giant bumblebee while music reminiscent of Kirby plays, while episode three is straight up the best linear Castlevania I’ve played in a decade, just without the series title attached. The fourth and final episode pays homage to both Mad Max and Metroid in a very surprising but welcomed way which you’ll want to see.

Episodes last about an hour or so each depending on your skill level, which admittedly is a bit brief for a game that costs as much as this one. That said there are extra unlockable hidden modes, which I won’t spoil here, as well as the ability to play with two players simultaneously.

While Tiny Barbarian DX isn’t the longest game, what is here is quality. The platforming is tight and deeper than you may imagine. The barbarian has a single jump, the ability to grab onto and climb up ledges, a sword attack, an elbow drop, and the ability to flex at will which serves no purpose other than comical purposes as far as I can tell. There are also a few advanced combos to be discovered that include a high jumping slice, and jumping with your sword spinning around you.

While the controls are simple, the platforming found here demands skill and precision. Jumping from chains to ledges and avoiding endless bats while simultaneously dropping elbows on snakes is something you may very well have to do. I can’t stress enough just how great traversing these levels feel.

Even better than making the way through levels is fighting the various bosses found throughout the game. You’ll fight a barrel-throwing gorilla (which includes a soundtrack reminiscent of Donkey Kong), a flying wizard that shoots electricity, and even a planet-eating god. Each boss is wholly unique from the last, with each testing that players have perfected the lessons taught by the level that came before them. While that should be considered standard game design, many developers fail to do so, especially with the finesse delivered by the developers here. Many bosses had my heart pounding in my chest as many fights came down to ‘sudden death’ moments where the next person to land an attack that would win the fight.

Perhaps my favorite part of the game, however, is the amazing chiptune soundtrack by Jeff Ball, best known as a violinist for Steven Universe. Don’t take my word for it, give it a listen here and see if you agree. As someone with a fondness in my heart for chiptune, having gone out of my way to see it performed live after having grown up playing and completing nearly every major NES game, I can say without a shadow of a doubt this is one of the best chiptune soundtracks I’ve ever heard in my life—a real achievement.

If you (and possibly a friend) have a hankering for some retro-inspired platforming action with challenging bosses, awesome parallax pixel graphics, and a soundtrack that will have you humming along, you don’t want to miss out on Tiny Barbarian DX. While the price might be a little steep, I certainly came away more than satisfied and quite impressed as the game had me hooked from start to finish. I, for one, can’t wait to see what StarQuail games cooks up next!

Tiny Barbarian DX may look like just another indie platformer on the surface, but it is so much more than that.