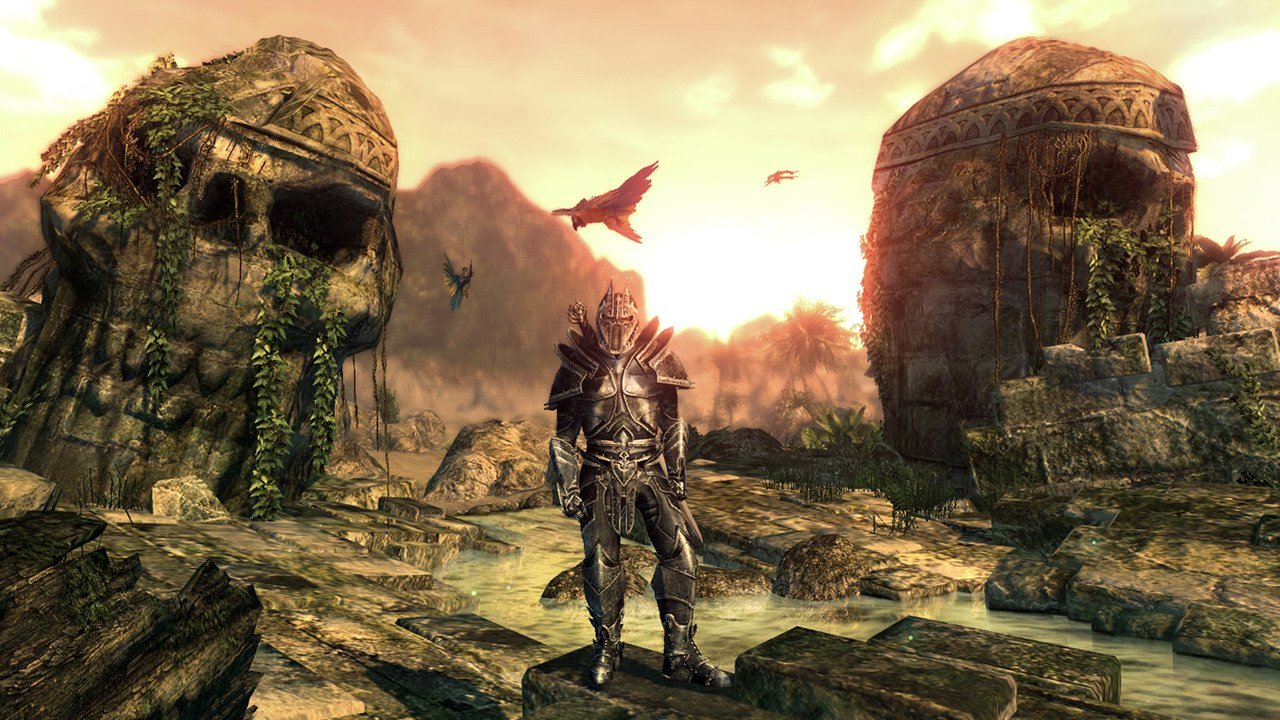 Malcom X once said “You can’t drive a knife into a man’s back nine inches, pull it out six inches and call it progress.” While it may be uncouth to relate the civil rights movement to playing Two Worlds II it’s a quote that encapsulates everything wrong with the game. Two Worlds II is much improved over its universally detested predecessor, but not nearly enough to call it enjoyable.

From the beginning of the game players will struggle with an unnecessarily confusing control scheme that relies too heavily on context sensitivity. Hold the left trigger to enter stealth, but hold it while already moving and your character will burst in to a sprint. Completely opposite actions are too frequently assigned to the same buttons, requiring the player to actively think about what to press rather than just enjoying the game.

The controls do get more comfortable as you get deeper in the game, but it’s more of a mitigated nuisance than accepting a steep learning curve. However, there will always be moments of sheer frustration when your character drinks the wrong potion or wastes a special attack because you’ve got the wrong trigger held or the wrong weapon equipped. Perhaps the PC version with a full keyboard support controls better, but it wasn’t made available for testing.

Without a class system, players are given full agency over their character; how the character develops is up to you. Putting skill points in to archery, melee or magic dictates character grows and books found or bought through the game unlock additional abilities. It’s a tried and true system, but it doesn’t work perfectly in Two Worlds II.

Because the game’s enemies don’t scale in difficulty creating a balanced character with equal skill in all competencies will find the player unable to survive as the game gets more challenging. To make matters worse leaning heavily on magic or archery also poses problems because the campaign frequently thrusts players in small arenas where those two specialties don’t perform well.

Thankfully there is the ability to reassign skill points through ‘regression therapy’ vendors throughout the game. It’s not free, but it does offer players the opportunity to fix the game crippling mistakes they will undoubtedly make trying to craft their ideal character. The solution works, but it’s far less preferable to a game that promoted success regardless of character development.

Two Worlds II’s biggest highlight is its three crafting systems. Equipment can be dismantled for components and used to improve other items. It requires some skill investment and isn’t really necessary for success but it does save the player from constantly comparing stats as the game doesn’t offer a simple damage per second score.

Meanwhile plants and organs collected through exploration and combat can be used to brew potions. Because each component has different alchemical properties players can create plenty of unique potions, helpful if you’ve forgotten to buy some before going on your latest quest.

While the aforementioned systems are interesting, they’re neither unique to the game nor particularly exciting. Spellcrafting in Two Worlds II allows players to create unique spells by mixing and matching power cards. This allows players total control over the type of wizard they want to play, and provides them with the ability to find spells they feel comfortable with.

The biggest problem with having three inventory-heavy crafting systems is that the menus get clogged with so many items it becomes a chore to manage and use everything efficiently. Because this is the game’s only real strong suite the developers must have thought it necessary to bombard the player with options within the system, leaving the player to sift through dozens of useless herbs just to find one that’s helpful.

Combat looks deep from the surface, but gets monotonous after a while. For melee it’s a flurry of trigger mashing broken occasionally with a special attack here and there. Archers do their best to find high ground, fire a barrage of arrows and hope the poor AI pathing keeps it from getting to you. Finally mages fire their biggest spells one after another until health or mana run out before fleeing for a potion break.

While the game is set up for on-the-fly swapping of equipment sets, affording players the ability to mix up fighting styles mid-fight, it’s more trouble than it’s worth. If the player lets their guard down for one second, even the weakest monsters will sink a barrage of attacks that will end even the most powerful characters. The game’s controls and over-complicated design just don’t allow the fluidity to make this combat dream a reality.

If there can be only one thing said about Two Worlds II is that it offers a lot of content. Both the world and the number of quests and activities within the world are huge. With the use of teleporters players will have the opportunity to fully explore a vast world with different themes ranging from a feudal Japanese university to an Egypt inspired desert. Activities found within these lands include gambling, sailing, horseback riding and mastering musical instruments; none of which are entertaining.

It’s easy to make a lot of content if you don’t strive for greatness, Two Worlds II doesn’t even strive for adequacy. Between the awkward Guitar Hero-lite lute system to the unsatisfying dice games it’s all skippable. Even the horseback riding, a staple of the fantasy genre, lacks the speed or fun to make it worth its over-sensitive controls. During the review period I maxed out my character’s speed and endurance to avoid reliance on a horse because it was so frustrating.

Quests are no better; stealing ancient strategies from the MMO world, every mission is retrieving an important item, killing a boss, or clearing an area of monsters. Apart from the second chapter which is almost entirely conversational, the game reaches a point of monotony very quickly and stays there for the rest of the game. Thankfully the core campaign only lasts 8-12 hours and not the sprawling 30 the marketing claims, though I’m sure a masochist could stretch this out with the game’s numerous side-missions.

This would be fine if the story was engaging or unique, but it doesn’t offer anything new to the fantasy genre and retreads the steps of better works. Even the dialog is poorly written and even worse in execution, ranging from the smarmy but rough protagonist to the laughably idiotic banter of passing NPCs. Any semblance of believability or immersion is gone thanks to these performances, and that’s before the poor lip syncing problems.

Two Worlds II also features one of the most cliché endings of the fantasy genre (no spoilers here), and one of the worst end-game mistakes video games can make. Taking the player’s progression out of the equation and requiring them to play what is essentially a shooting gallery minigame makes the entire experience feel cheapened and victory incredibly hollow. This would be fine if the story could carry the emotional impact to deliver a satisfying end, but the writing just doesn’t reach par.

Visually the game scores some points, but not too many. The much-touted lighting system looks great outdoors, especially at high noon or other equally bright moments. It’s in dark locations that it struggles, casting obvious spheres of light that don’t blend or dissipate properly in to darkness. Combine that with some flat texture work and oddly polygonal natural geography and you’ve got some ruined potential.

Characters and creatures look great, except for humanoid faces which look dead and flat. It’s their animations that make them unbelievable though. While you might be able to accept that your character runs (really fast) like a prancing schoolgirl, it seems really odd that an unarmored behemoth would cower with his hands over his chest as a means of defending your giant swinging axe.

The game does feature competitive multiplayer, which is relatively unique within the genre. However, the control issues and generally slow nature of movement make it a busted experience. To make matters worse the quick-match system will frequently pair characters of vastly different levels making things unbalanced. Mages and archers are also crippled in deathmatches as melee characters can often sink a dozen hits before the slower classes can get a shot off. Without the other classes providing variety it’s a game that devolves quickly in to a bunch of fighters running around and button mashing to victory.

Because the game doesn’t let players carry over their single player character in to multiplayer the game does offer some co-op missions to provide players a chance to level up their online avatar. While linear and suffering from the same poor quest structure as the single player missions, this is probably where the game shines brightest.

With friends this is fun, albeit mindless, gameplay that offers some variety for those sick of first-person shooters offering the only co-op experiences. The game doesn’t really require tactics or strategy, but if you’re going to play a monotonous game it might as well be with others.

There is also an option to find random players online, and the game seems to calibrate its difficulty based on the average level and number of players in the party. This keeps things balanced, except for when other players get disconnected leaving the player to either soldier on against too-challenging odds, or give up on their progress and start again.

Two Worlds II is a lot better than its predecessor, but that doesn’t make it a good game. It suffers from poor production values in every facet of the experience and falls short of being enjoyable at almost every turn. There’s some joy to be had in the co-op gameplay, but the campaign and competitive multiplayer don’t offer enough to make this worth playing.

Even if you’re absolutely desperate for a new fantasy RPG this is a hard one to recommend. With the genre oversaturated with much better titles it’s not worth suffering through Two Worlds II’s lousy design just to scratch that itch. Avoid this game, it’s not worth the time spent playing it.

Editor’s Note: This is my second time reviewing Two Worlds II. My initial review scored the game 30/100 despite playing it for less than 10 hours. This review was written after completing the core campaign, several side-missions and a healthy portion of the co-op quests.

I apologize to SouthPeak, TopWare and Reality Pump for my snap-judgment of their game. This updated review more accurately portrays their game.

Two Worlds II is much improved over its universally detested predecessor, but not nearly enough to call it enjoyable. 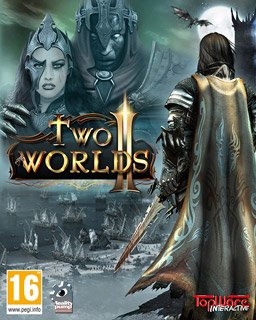