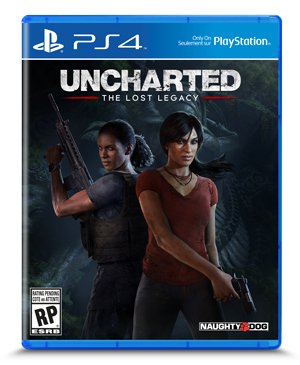 I didn’t really enjoy Uncharted 4. I want to get that out of the way right now. It was an undoubtedly stunning, well-written, gorgeously animated game—but it was boring. There was far too much walking and talking and the linear nature of the game—which was previously a series strength—caused me to get bored rather quickly. I’ve been a fan of the franchise since way back when I got Uncharted: Drake’s Fortune for Christmas in 2007, so putting down UC4 and not even finishing it felt like a strange kind of betrayal. This is the mindset with which I went into Lost Legacy, a game that revived my love for the franchise by switching things up a bit, in a gorgeous, semi-open world (I didn’t know I wanted this in an Uncharted game but here we are), silenced weapons, multiple objectives (think side-quests) and branching dialogue options. Of course, series staples like fantastic voice-acting, interesting puzzles, and absolutely ridiculous visuals remain.

Also, no more Drake and Sully. (In an Uncharted game? Say what?)

In a first-time for the series, players won’t be spending time with the charming mass-murderer Nathan Drake and his cigar-munching best pal Victor “Sully” Sullivan. Instead, Lost Legacy sees the return of Chloe Frazer (Claudia Black) as the main playable character, with Nadine Ross (Laura Bailey) taking on the role of sidekick. Black and Bailey do an excellent job of bringing their characters to life and ensuring the snappy, natural dialogue for which the Uncharted series is known is present and in good care. It’s also much lighter fare than A Thief’s End, not being bogged down by the heavy-handed drama found in that game. The motion capture is also incredibly well done, projecting facial cues and body language that look about as natural as is currently possible on PlayStation 4 hardware.

The story finds Chloe and Nadine hunting for the Tusk of Ganesh in the Western Ghats, a mountain range that runs along the West Coast of the Indian Peninsula. The story is centred on Hindu Mythology, and while the game obviously takes some creative liberties with this setting, there is plenty to dive into for history nerds. Of course, it wouldn’t be an Uncharted game without scores of hired goons to shoot, punch, explode, and throw off temple roofs, and Chloe and Nadine will be battling a mercenary army headed by the rebel leader Asav.

In another first for the series, Lost Legacy takes place in a contained open-world setting. While this is a trend in video games that seems a bit ubiquitous and over-saturated at the moment—with games like Breath of the Wild, Horizon: Zero Dawn, and countless others using the same setting and mechanics, including the popular “hide in the grass for stealth”—for Lost Legacy it works surprisingly well. Players will be traversing a large map, littered with optional areas and several major ones. This traversal is made easier by the use of a jeep, which can climb pretty much anything but will drift like crazy in the mud (a cool touch). One of the best minor features in the game involves getting in the drivers seat. Players can walk up to the jeep and press the triangle button, like in any standard open world game, or they can run and jump and Chloe will automatically slide ride into the driver’s seat. It was a nice little addition that made constantly leaving and entering the jeep a lot smoother, plus it looked cool—which is really the most important thing.

Combat and climbing work like every other game. Players will jump from ledge to ledge, dragging down unaware guards or battle it out using the tried-and-true cover-based shooting mechanic. A fun new addition in Lost Legacy is the use of silenced weapons, offering a whole new approach to stealth-killing those clueless hired goons. The other major half of any Uncharted game, the climbing aspect, is here again, with the added additions like the grappling hook and the piton from UC4. The grappling hook aspects were the best part of navigating the various temples found in the area, and several areas had puzzles based entirely on this mechanic. It was a thrill to feel like Spider-Man—but with a gun—swinging from column to column and blasting enemies. A lock-picking mechanic has also been added, but is really nothing that special in the grand scheme of things.

Of course, Naughty Dog didn’t become one of the most well regarded studios in the industry by making ugly games. Lost Legacy takes this aspect to whole new heights, featuring what are quite possibly the most ridiculous graphics to be found on consoles—including Horizon: Zero Dawn and from what I saw of Uncharted 4. The terrain absolutely explodes with colour, and in a true-to-life representation of the Western Ghats is lush. There is an unreal amount of plant life found nearly everywhere in the game, from trees and bushes to flowers and vines, and each individual plant oozes vibrant vitality. On top of this, the draw distances are insane for a console game. This is incredibly important for a game like Uncharted where the player spends plenty of time on the tops of towering structures and mountainsides. Many, many times I found myself just stopping and staring and the wondrous virtual jungle spread out before me, with beams of sunlight shooting through mist conjured up by far-off waterfalls. The game is damn pretty, that’s for sure.

Lost Legacy is definitely more DLC or Standalone expansion than full-on entry in the series, and can be completed in around ten hours. Throw in some side quests and general dicking around and you can push that to 15, but all-in-all Lost Legacy is not a long game. For the steep price of $49.99 CAD, it’s a tough purchase. On the other hand, I had more fun in those hours than my entire time playing Uncharted 4, so take that as you will. There are also fresh multiplayer options, including new skins and an expanded Survival Mode. Lost Legacy is a short but excellent expansion to the series, with jaw-dropping visuals, fun and engaging gameplay, and excellent, believable voice acting. Anyone who felt fatigued or bored by Uncharted 4 should definitely check this out.

Uncharted Lost Legacy is a stunningly beautiful and entertaining return to form for the franchise.
REVIEW SCORE
9
File Under: Naughty Dog, Sony, Uncharted