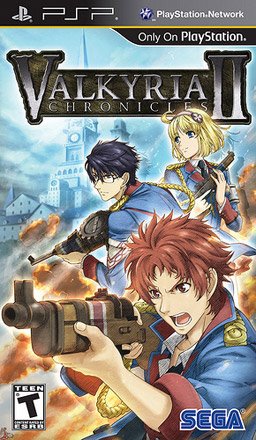 It’s ironic that tactical roleplaying games tend to have the most involved plot Games like Final Fantasy Tactics and Tactics Ogre sport long, convoluted epics, when, really, it’s a genre that requires the least amount of narrative backbone.

Does a Risk game really need more than a map to explain itself? Does a rook need a back story?

Valkyria Chronicles 2 (a PSP sequel to a PS3 game) puts its pawns in a alternate reality with a if-you-squint-really-hard version of World War II. On the one side is the autocratic Empire, on the other is the democratic and dastererly Federation. In the middle is the neutral Gallia, a peaceful nation state, rich in resources, that stands apart from this battle royale. The first game saw Gallia fighting back against an Empire invasion but now there’s a rebellion brewing to the south.

The game starts with Avan Hardins, a seventeen year old teen, receiving news of his brother, Leon’s, death. He decides to go to Leon’s school, the Lanseal military academy, to figure out what happened to him. Through a weird technically the national militia can’t deal with internal disputes, so teenagers have to take up arms against the rebels, fueling most of the action in the game.

Stripped of story and setting, the game is solid. As commander, you’re given an eagle eye view of the action and a set of command point Selecting a troop plunges you into a third person view of the action, and the ability to move the unit a certain distance and take an action (whether it be to shoot an enemy, or heal an ally). Troops can be swapped in and out easily and selected multiple times, giving the game a sense of speed and action occasionally missing in the genre. The third person view makes the action and choices more visceral, while emphasizing tactical elements, like line of sight. Enemies don’t stay static during your turn either, firing at you if you cross their view. If you dawdle without cover, you will get torn apart.

Between missions research can be done on new items for the troops using money earned in battle, missions can be looked over, and classes can be upgraded. The game takes place over months, with each new month unlocking more tech and a series of missions to complete before a final end of month story mission. The missions tend to take up four favours: either you’re taking over an enemy camp or camps, killing all enemies, escorting a unit to a specific location, or guarding your own base, although some special story based missions are sprinkled in. Also, new levels tend to have new wrinkles in the system. the desert map has few places for cover, and the heat severely hinders mobility, making it a brutal bloodbath if you don’t use your command points wisely. Leanbluff Forest’s mazelike paths make it ideal for surprise ambushes and quick blitzkrieg attack Most missions have a twenty turn cap, and grades are given based on how quickly missions are completed, again emphasizing the quicker pace of the game.

There are a handful of classes (scout, shook trooper, anti-tank lancers, healer/engineer, and armourers,  a melee unit), each with a set of strengths and weaknesse Each class can be further specialized, but the choices are never overwhelming or complex. Classes of units can be upgraded with experience gained on mission This is a welcome addition because it means that classes can be managed in chunks, without having to individually micromanage unit This could have made all characters within a class seem interchangeable, but each student is given unique potentials, abilities that awaken in battle. Some are negative, like “Darcsen Hater”, which lowers a unit’s ability if they’re near a Darcsen classmate, while some are positive, like “Country Bred” which offers a boost to accuracy while on dirt. Furthermore, the more a character is used, the more story events are unlocked for that character, culminating in a character-specific mission that unlocks new potentials, and other bonuse This fosters a great sense of community and empathy for the character When Erik is shot down in battle, it’s not just a shock trooper who’s down, it’s the reformed bully with a heart of gold.

The individual stories are engaging, and easily one of the best parts of the game. The story plunges into topics of racial hatred (in the form of the Darcsens, who make up some of the student body), death of loved ones, friendship, and how much it sucks to be a child soldier. While the story requires no knowledge of the first game – backstory comes up often enough and history books can be bought in the game’s store – there several cameos and nods to the first game. They aren’t distracting to new players, and are a treat for people coming back to the serie

There are a few multiplayer mode There’s straight up deathmatch (pick your six best and go from there), but there’s also the coop mode with up to four players, where you engage in missions with friend Several new mechanics are introduced in this mode. The ability to give your partner’s units cover fire, for example, making true cooperation more rewarding.

Valkyria Chronicles 2 takes the tactical RPG away from the isometric views and micromanagement that’s become the bread and butter for the genre. Each encounter is a tight skirmish, perfectly suited for the portable nature of the PSP. The emphasis on speed and narrower tactical choices doesn’t diminish the game, instead focusing it into a must have of the genre. That it manages to tell a story with a bit of sweep and grandeur in an interesting way is just the cherry on the sundae.

Valkyria Chronicles 2 takes the tactical RPG away from the isometric views and micromanagement that’s become the bread and butter for the genre.
REVIEW SCORE
8
File Under: Fantasy, PlayStation, RPG