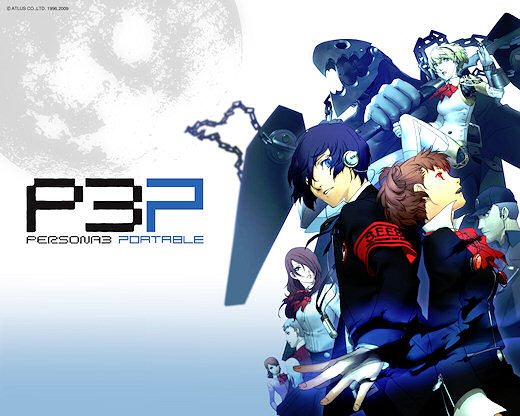 There’s a reason high school and demons often find themselves intermeshed in fiction: Being a teenager can be hellish. From Buffy the Vampire Slayer to countless anime series, it’s a rich vein to mine, but one that’s seldom touched by video game Because of this Persona 3 Portable feels fresh even though it’s a rerelease of a four year old game.

There are a few drastic changes in P3P, but the main points are the same. The game still revolves around a protagonist enrolling in a new school, Gekkoukan High. The island the school’s on has the nasty habit of turning into a nightmarish demon hellhole during The Dark Hour, a timeless void that happens after midnight, every night, where hostile shadows roam. Most people are turned into coffins, but there are a select few who are able to see what’s actually happening. You play one of those unfortunate few. It falls on your shoulders to fight against the shadows, whose attacks on citizens render them into slack-jawed vegetable Luckily these few chosen people can evoke Personas, mental representations of the self that can fight against the shadows in this alternate world. The protagonist has the ability to summon multiple Personas, an oddity. You and a group of schoolmates balance school life with a demon hunting career, while trying to uncover what exactly is going on.

The bulk of the game is a social sim, asking you to juggle the demands of the school day. This isn’t terribly difficult; the only negative social consequences come from cheating on a romantic partner or saying something terribly stupid. The entire city is open to explore and coupled with the lack of severe consequences, it’s a joy to stick your head in everywhere trying to discover new people to interact with. There are a few social stats that can be boosted, like charm, academics, and courage, but most of the time, you’re trying to build up relationships with people. On a gameplay level, these relationships give stat boosts that translate into the combat part of the game.

These stories are some of the best parts of the game, and there’s a variety of relationships represented. Aside from the obvious bonds of friendship or romance, there’s the sort of strong but odd camaraderie that comes from meeting somebody online, or comforting a young girl whose parents are going through a divorce, or hanging out with an elderly couple who’ve lost their son. These relationships grow slowly and organically, providing some of the better moments in the game.

The plot of the game itself is also top shelf. Large battles take place every full moon, and each month usually revolves around a central mystery.. The pacing is strong, giving strong story beats every few hours of play, while tying into the grander narrative. The story is ambitious and while it involves demons, the occult, and magic, at its core it’s about the relationships that grow between the motley crew.

The roleplaying part of the game is less successful. Tartarus, a tower that only appears in the Dark Hour, is where the action happen Players travel up the levels, encountering shadows and choosing whether to engage in combat or not. The battles themselves are entertaining –  the wide range of Personas with their own personal strengths and weaknesses, makes the combat have a rich, but not overly complex rock, paper, scissors feel. Most enemies can be analyzed for strengths and weaknesses, which plays a large role In the tactic Likewise, creating new Personas gives the game a lot of colour. Personas can be won through battle, but the bulk of them come from fusing two or more Personas together. There’s a collector’s urge to try to get all of them, and there’s a lot of minutia that can be mastered if you’re a power gamer. The game doesn’t demand this high investment, and on normal difficulty there’s no pressure to delve into the deeper annals of Persona fusion.

The problem with Tartarus is the lack of variety. Each block has a slightly different aesthetic, but you’re still going through randomly generated maze There’s an occasional mini-boss every few floors, and the full moon events are usually great set pieces, but there’s a lot of grinding. Going up a level, whether it be character or tower, is superficial and doesn’t feel particularly rewarding.

These old problems are somewhat offset by the improvements in the game. While Tartarus is mostly unchanged, the social environments are no longer 3D spaces that can be walked through, but instead static 2D screen The game gives up a sense of energy that comes with these living environments, but the tradeoff is that it’s easier to navigate, quickly allowing the player to bring up a menu to go to a specific room or to see what can be interacted with in any given space. Another tradeoff: the lush anime cutscenes of the PS2 original are gone, but in there place are some gameplay tweaks from Persona 4.

Chief among them is the ability to control your teammate This is hardly ever a problem – the AI fights intelligently, exploiting the enemy’s weaknesses – but some of the boss battles require a precision and subtlety that the AI can’t pick up on. There are two new difficult modes, one very easy, another very hard. Gone is the side quest “The End” that came with the PS2 rerelease of the game, but it’s more than made up for with the ability to choose a female protagonist. Playing as a young woman changes a few thing The romances change: instead of courting your female classmates, you, instead, have the choice of pursuing your guy friend Different relationships are available, but the bulk of the game is the same.

It’s high praise that despite it’s repetitive dungeons, Persona 3 remains an engaging game, even on its second rerelease. Atlus’ focus on story has paid off handsomely. Instead of being dated by its repetitive gameplay, Persona 3 Portable seems just as engaging because of its storytelling. If you’ve already played the game there’s little reason to come back aside from a few tweaks, but for fans willing to take their first plunge into the series, it’s quite a treat.

Atlus' focus on story has paid off handsomely. Instead of being dated by its repetitive gameplay, Persona 3 Portable seems just as engaging because of its storytelling. If you've already played the game there's little reason to come back aside from a few tweaks, but for fans willing to take their first plunge into the series, it's quite a treat.
REVIEW SCORE
8
File Under: fighting game, Handheld, Persona, PlayStation