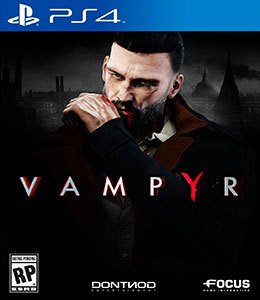 It’s been a while since we’ve had a decent Vampire-themed RPG, at least it feels that way. Vampire: The Masquerade—Bloodlines was such a fabulous game that while I’m sure there have been other games in the Vampire RPG genre since then…I can’t think of any.

Paris-based developer DONTИOD (the team behind Remember Me and Life is Strange) has been slowly hyping up their latest release, Vampyr, since E3 last year, and gamers looking to unleash their inner-bloodsucker finally have something to sink their teeth in—yeah I went there. While the combat leaves something to be desired, as you can imagine from the developer who released Life is Strange, the narrative focus and dialogue are where the game shines.

The game follows freshly-turned Vampire Jonathan E. Reid, who awakens in a London that is currently being decimated by the Spanish Flu (and perhaps something else!). After accidentally committing a horrible act of thirst-fueled violence, Reid sets out on a mission to find out who turned him into a vampire and why, as well as using his Doctor smarts to help find cures for the population’s various maladies. Throughout his journey Reid will interact with 60 or so individual characters and depending on the player’s choices (both in dialogue trees and actions) can get one of four different endings. Players can also help cure different NPCs of their varying diseases and sicknesses by crafting medicine, the option to do so appearing during interactions with those characters. Doing this will help bring the overall health of the district (an individual zone in the game’s version of London) up and also increase the amount of XP that can be gained by feeding on that character.

Narrative and dialogue are the key here. While the game is certainly an “action” RPG, the combat seems like it was merely introduced to give the player a break from the never-ending dialogue wheels—of which there are many. The majority of the game is spent talking to people and investigating them. Clues can be discovered in various ways that unlock special dialogue options for each character, which will change the flow of the game and the amount of XP the player will get if they choose to feed on them. This mechanic is one of the most interesting and unique aspects of Vampyr. “Hints” will become unlocked depending on the amount of investigating and chatting to other NPCs the player has done, and this knowledge can be used to leverage the character in different ways.

If you want to level up your skills faster, you can simply find a healthy NPC that offers plenty of XP if you eat them. However, doing this will drastically affect the overall health of the district and alter your morality path. Do you want to play as the evil Vampire that merely acts like a decent person while “fattening up” your prey to feed on later, or do you want to help cure this dark and sick version of London while stoically curbing your vampiric instincts? This branching tree of morality is really ideal for a vampire game, especially in one where the lead character is a doctor.

Unfortunately, if I have one bone to pick with this system it’s the complete dissonance between the player’s interactions with NPCs and the amount of goons (which are essentially just volunteer police that patrol the streets) that you massacre while traversing the game’s world. Reid can make all the tough, morally correct dialogue options and choose NOT to feed on the game’s characters…but while walking around the street will kill 20 guys just out doing their civic duty. I found that a bit jarring but again, the combat is a nice break from scrolling through dialogue options.

In a game with so much dialogue, voice acting is key, especially given that all the major characters have full audio speech and not simply text bubbles. The quality of the acting varies from character to character, although I must admit some of the English “accents” are so bad that it immediately broke my immersion several times. The lead also gives a rather wooden performance. Having said that, several characters are acted quite well, and in a game with so many different voices, it was bound to be somewhat hit and miss in this category.

Vampyr could have easily been nothing more than an interactive narrative game or visual novel like DONTИOD’s previous titles, but the company decided to make it a full-blown and more rounded experience by including plenty of combat. Unfortunately, the combat is easily the weakest aspect of the game and showcases the developer’s comfort level with bigger, more robust gameplay mechanics outside of conversations and narrative. Players have a rather large variety of different powers and abilities to level up, on top of crafting and upgrading several melee and ranged weapons. While I love me a nice, complex system of attacks and builds to work around, the actual implementation leaves a little to be desired. I essentially used the same three attacks over and over and had zero trouble with any of the game’s enemies—whether bosses or mobs. I love that DONTИOD took the time to give the player so many playstyle options, it’s clear that this area is new territory for the developer and as such feels unpolished.

Visually the game is certainly not a masterpiece, with textures, particle effects, and lip-syncing all looking thoroughly early-generation. But whatever, it’s not like DONTИOD has a huge team and budget to work with so personally, this didn’t really surprise or bother me. They nailed the atmosphere for a vampire game set in 1918, and one where sickness and disease are prevalent themes. There is plenty of fog and mist, dirty alleyways, broken down and dirty homes, and creepy graveyards, hospitals, and sewers. The score is also fantastic and does a really great job of setting the mood.

If you’ve been searching for a story-driven, narratively engaging vampire game with plenty of atmosphere, Vampyr is right up your alley. If you’re looking for a snappy, tightly controlled ARPG, you might want to look elsewhere. The game shines in the areas you’d expect a title from DONTИOD to shine, but flaws and lack of expertise in other areas give the game a bit of a rough edge. It all depends on what you’re looking to get out of the game. It’s still a hell of an effort from a smaller studio, and it’s awesome to see a game that breaks away from the mould—somewhat, anyway. It’s a pretty original title in the ways it sets out to be, but falters a bit in trying to include standard mechanics that other developers have done better. All in all, a solid entry in a genre filled with too few.