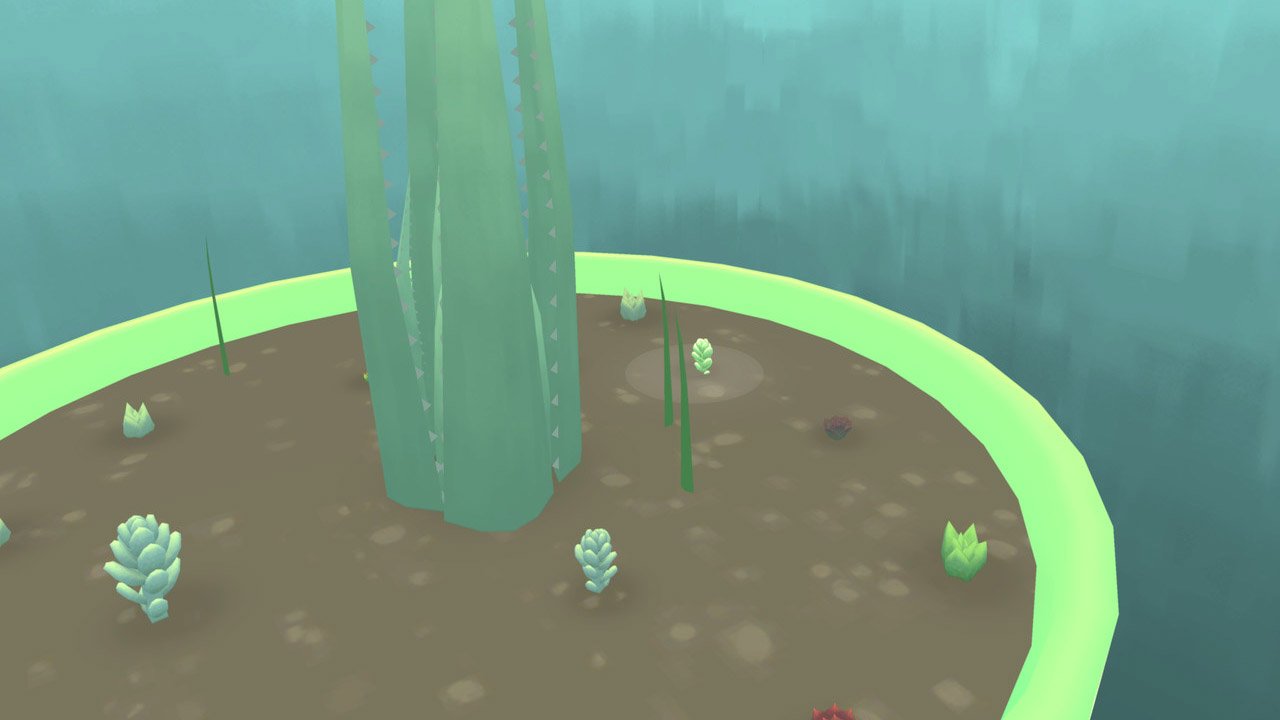 Mom said it was unkillable. I mean, technically, I didn’t kill it. Crusty, crunchy sienna was spreading like coffee through a tablecloth and its base was a graveyard of failed shoots, but my old college plant is still alive and kicking. In fact it looks fantastic now. I haven’t been responsible for its wellbeing in half a decade.

And I’d love to fancy myself a green thumb. Isn’t it my cultural duty as an Oregonian to uphold the stereotype? Maybe I’ll have more luck with virtual plants. Viridi, the succulent simulator from the minds behind the similarly meditative Eidolon, lets you grow a varietal pot with slackened botanical imperatives. They may have crafted my redemption.

But succulents are native to arid climates. They’re cacti and other pokey flora I’m not familiar with. Maybe not.

First, let’s choose our pot. Chevron Terracotta sounds nice. What else can we fi—. Stoneware Nightmare. What? Thousand Eyes? Um. Let’s go with the Kool Kat—shades on a feline are appropriate for something low key.

Next is a selection of starter plants. The “Pallidus” bunch looks a bit more like bloody spear tips than I’m willing to deal with right now, so let’s go with the vaguely aquatic teals and blues of the “prasinus” option. The kats can pretend there’s fish gliding amongst the familiarity of vicious barbs. We’ll call it the Kat’s Kistern, because cistern is a cooler word than aquarium.

Okay. We’ve got some stray grasses and the nascent buds of our initial set. Let’s see… There’s a transplanting button and a spray bottle. Whatever amorphous gardener I’m embodying is already more prepared than I ever was. Click to select, and few careful spritzes here and there, and… I’ve already made a potentially fatal mistake. Drenching desert life in moisture is not good. I can at least pluck the weeds so they don’t suck nutrients from the rest of what I’m hoping might survive my hand.

The aloe laid directly in the centre already had the name “Blue Elf” where everything else bore scientific monikers. That won’t do. After a moment of pondering something new, musical staff slid in from the left. I’m singing and lifting its status from “sated” to “vibrant”. I’m curious what this will do for it—perhaps the poor Sempervivum I drowned can be roused into livelihood with some gentle cooing?

I enjoy a moment of calm. I’ve had the program open to the side of a web browser for some time now, its delicate electric xylophone percolating into my work. “Sunshine” the snail is gliding past the far rim. You know, this really is a nice accompaniment. Blue Elf has grown on me.

The mobile influence is immediately obvious, unfortunately. Click and drag menus always feel muddy with a mouse, and buttons are great big fingertip-sized circles. Strangely enough, the monetization structure seems oddly perfect for Steam users—new plants start at around the sum you’d sell a trading card for. Did you know preorders of XCOM 2 come with two or three free Viridi seeds? Heck yeah, they do!

Viridi holds a weird, nebulous charm. There’s so very little to do, but you’re not meant to be doing much anyway. The occasional rearrangement of life and a gentle misting can produce a lovely little grove against the relatively drab background, something that relied upon you to thrive. You’ll feel ownership over it, and seeing my friends alive and flourishing the following week was a softly gratifying experience. Keeping the application running in a corner might uplift your computer time. Or it’ll seem utterly pointless. I kind of like it.

It’s a difficult thing to put a score to. A normal free experience might be valued against the other things you could be spending your time on, but this isn’t something you’ll interact with very often. Give it a try and see if it resonates with you, but don’t expect to fall in love.

Viridi holds a weird, nebulous charm. There’s so very little to do, but you’re not meant to be doing much anyway.