Nostalgia: The Secret To His Power 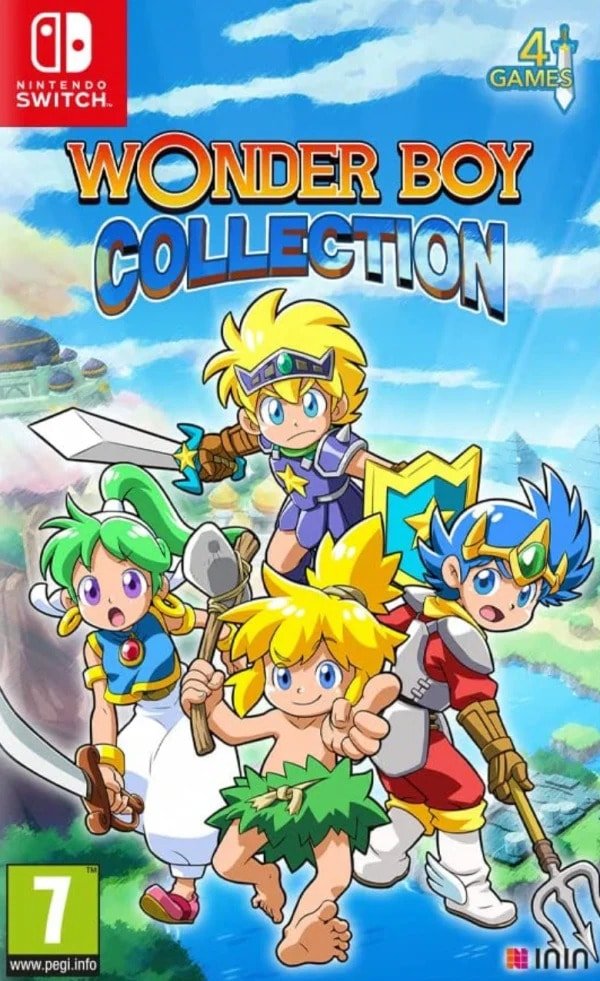 My first video game console was the Sega Master System. While it’s not the first system you think about when you think about 80s video games, it was a good system with some great titles. Among the first games that I got for the system was Wonder Boy. It was a simple game with a simple story and an incredibly catchy soundtrack. Recently Westone Bit Entertainment and United Games Entertainment released the Wonder Boy Collection, a compendium of four titles in the Wonder Boy Universe, including the original Wonder Boy (1986), Wonder Boy In Monster Land (1989), Wonder Boy in Monster World (1991) and Wonder Boy IV (1994)

When turning on the game, you get a language menu allowing you to choose from English, German, Spanish, French and Italian. The Game menu is a very simple layout with the titles, a gallery consisting of art and the original Sega cover art for the games and the credits. It is very reminiscent of an emulator menu.

When you select your game, it loads up the classic 4:3 game with art along the sides which is less of a distraction on the big screen than it is on the handheld. I’m not going to lie… I was transported back into my 6-year-old self when the Wonder Boy title screen came up. I remember very specifically playing in front of a 30-inch TV with my father and hearing that music hit on level one.

“I’m not going to lie… I was transported back into my 6-year-old self when the Wonder Boy title screen came up.”

Moving on to the actual game play, the Wonder Boy Collection is a pretty clunky game, but not in terms of being a clunky port of an old game. It feels like the original experience. There is just something about the layout of the obstacles on the levels that affects your ability to move through the stages with any semblance of smoothness.

Let’s also not forget about some of the silly, albeit fun aspects of the Wonder Boy Collection, including the fact that it appears to take place in the Stone Age with a hero in what appears to be a loin cloth and carries a stone hatchet, yet hatches a skateboard and accompanying protective gear from an egg. It’s not something that ever entered little Joey’s mind, but adult Joe can’t stop thinking about it.

As for the other games, I have had less experience with them over the years than the original, but the story moved away from a side scrolling action game to side scrolling RPG games, complete with more comprehensive stories, new weapons and armour and just an overall different experience from the original, including the fact that the hero of the fourth Wonder Boy is a Wonder Girl.

“…the Wonder Boy Collection is a pretty clunky game, but not in terms of being a clunky port of an old game.”

The RPG formatted games are still side-scrolling adventures, but now you can interact with characters and the environment, including entering buildings, reading signs and talking to passers-by. Weapons and armour are upgradeable and the integration of items and magic to help you along the way (i.e., everything found in any RPG game).

There isn’t much connecting the games to each other (at least for the portions of each game that I got through during my time with it), but they are all fun in their own way. I realized playing these sequels how I miss the simplicity of a classic 80s Role Playing Game. I feel like, as a father, my kids need to see these games not just to see how far we’ve come in terms of graphics, but also to learn more about storytelling in video games.

For $29.99 USD, you get all four games. It’s not a bad value for a visit back to your childhood (or sending your kids back to what games were like when you were their age). If you aren’t particularly nostalgic about these games and are looking for a real classic, then it might be worth looking elsewhere.

Fans of these games when they came out, rejoice! You have them all in one place for one reasonable price. If the games are new to you, it’s perhaps something you don’t have to regret missing.
REVIEW SCORE
7
Buy On Amazon
File Under: Wonder Boy, Wonder Boy Collection