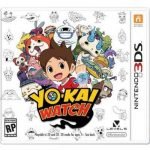 I was totally unaware that Yo-Kai Watch has apparently been a thing since 2013. When I saw the trailer for it at this year’s E3, it looked like a new IP by Level-5, who always seem to bring their A-game when it comes to creating fresh IP’s with unique worlds and stories in them. It wasn’t until I did a little research in trying to figure out some of the game’s elements that I discovered that this is a re-release, localized version of the first game, and the anime has also made its way stateside now airing on Teletoon.

Which is a real shame because Yo-Kai Watch is really good; a very charming and interesting game that a bit like Shin Megami Tensei, a bit like Pokemon, and a bit like a Saturday morning anime you might’ve seen on the ‘Fox Box.’

Yo-Kai Watch puts the player behind their own boy or girl who, upon looking to catch some bugs in the forest, comes upon a mysterious Gashapon machine. When the machine beckons the player to feed it a coin, an eccentric ghost (or Yo Kai if we’re being pedantic) by the name of Whisper emerges pops out and pledges to be the player’s friend and butler. Whisper also equips the player with the titular Yo-Kai Watch which allows them to see the various Yo-Kai that inhabit the world. When strange things begin happening, it’s up to the player to unravel the mystery.

Along the way, players will face many strange and unique Yo-Kai in a combat system that feels similar to Shin Megami Tensei but with a bit more of a mobile twist. Yo-Kai execute basic attacks by themselves; however, these attacks build up a special meter that the player can choose to execute. These attacks use the 3DS’ touch screen and can be as simple as tapping bubbles, tracing shapes, or spinning a wheel. During the fights, players can give items to enemy Yo-Kai to try to befriend them and have them join your team. Figuring out which items a Yo-Kai might like takes a bit of guesswork, but the game makes it simple enough that feeding a Yo-Kai items throughout the fight generally makes them want to join you.

Players can have up to six Yo-Kai in their team, but only three can be on the battlefield at a time. Yo-Kai are arranged in a wheel that players can rotate to switch up what three are out at any time during the fight.

While this all sounds very simple, it actually takes a decent amount of focus and planning to succeed in a fight—especially in boss fights. Part of the combat is the targeting system that allows you put a pin in a certain enemy. Bosses, which are a lot larger than your average Yo-Kai, have specific weak points. If you’re not on the ball during these fights and pinning specific parts of a boss to open up its weak points, you run the risk of getting beaten pretty badly. It’s simple enough for kids to get into, but challenging enough for adults to enjoy.

Keeping with the feeling of the traditional RPG, Yo-Kai Watch has a quest system, and this is where the game could have been a bit better. While players can accept quests at any time, the game automatically tracks story quests and does not allow for you to make whatever quests you want to complete your active quest. This can lead to some frustration in trying to figure out where to complete certain quests, as it’s backed by a map that (when presenting quest markers) resembles a hand-drawn map and not the detailed map you get when you’re running around.

Much like Fantasy Life, quests have very specific requirements for completion, and something simple like ‘defeat these monsters’ can only be completed when you go to a certain area and talk to a specific monster to engage in a fight. However, with a little patience, these problems can be overcome and are not detrimental to the game.

Yo-Kai Watch is set in the idyllic town of Springdale, which feels a lot like an American town, but looks like a Japanese one. One of the things I’ve loved about quite a few of the Level-5 games (Fantasy Life in particular), is how they manage to make a small world feel huge. The overworld opens up to a lot of new areas and all the buildings and nature fit very well on the 3DS screen. It reminds me a lot of GTA: Chinatown Wars on the DS in that regard. As well as a substantial overworld, there are a lot of side areas for fighting Yo-Kai, as well as a variety of dungeons to explore.

Not only does it look and feel great, despite being full of ghosts, but the whole world of Yo-Kai Watch is also bursting with life. There are so many people populating the streets as well as several hidden Yo-Kai you can find either messing with people, or just being around. It really adds to the feeling of the game’s universe; even passive Yo-Kai are hidden in plain sight, and you can engage with them anytime. The game is filled with nice little details; my favorite being the game’s optional crosswalks that you can actually press the button to cross properly.

Yo-Kai Watch has an amazing soundtrack. The overworld theme has a fun, childlike whimsy to it that really emulates the idea that this is an adventure for kids. The battle theme is great with very weird, Theremin-esque tones, capturing the feeling of these ghostly battles. Character voices and sound effects are great, with every Yo-kai saying their name in a funny and unique way when they join you; sometimes adding in a little extra dialogue.

Yo-Kai Watch is an excellent game. A traditional RPG is a little more accessible for children and adults alike. And while adults may find its challenge a bit lacking, it’s certainly fun and interesting enough to be entertaining. For a pocket-sized RPG that will provide hours of gameplay, it’s certainly worth a look.

Yo-Kai Watch puts the player behind their own boy or girl who, upon looking to catch some bugs in the forest, comes upon a mysterious Gashapon machine.
REVIEW SCORE
8
File Under: Level-5, Nintendo, Nintendo 3DS, RPG