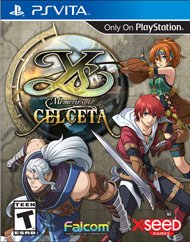 Ys might end up taking the crown for “longest-running series”, as it has churned out titles since 1987. Never breaking the mainstream, our lovable hero Adol Cristan has continually captured the hearts of RPG fanatics, but only within a very niche demographic. Memories of Celceta, the newest entry, breathes life into Sony’s handheld, the PlayStation Vita. The story is boring, the graphics are dated, but the fighting and exploration is enthralling.  I may be new to the phenomenon, but Memories of Celceta is a blast to play, despite how simple it is. Adol might as well be anime’s Indiana Jones, as his love of adventure and thirst for exploration act as inspiration for the player.

Memories of Celceta isn’t entirely new though. A re-imagining of Ys IV, the title boasts new graphics, new gameplay system, and a much more fleshed out story. Your task: map out the grand and dangerous forest of Celceta. The problem: you’ve lost all your memories. On the way you encounter memory fragments, that help bring back a picture of what happened before the start of the game. While the story is light-hearted and by no means takes away from the title, it isn’t the focal point and probably won’t keep you playing. But the mapping and action will.

Along the way you’ll meet friends who will join your team in your attempt to not only finish mapping the forest, but also save the world. You can play as many different characters, but only three of them can be in the party at once. Most of the times you’ll be fighting evil lizards, big wolverines and more. Attacking normally is linked to one button, but you can also use skills that do a variety of different things. Each character has a different weapon, but think of it like a Tales game except everything is in real time! There’s also crafting, and a host of ultimate weapons near the end of the title.

While past Ys games have been notorious for their difficulty, I found playing Celceta on normal to be pretty easy, only dying a few times. Nightmare, however is a different story. If you’re a seasoned veteran of the franchise, you might want to start on this horror. But even then, it shouldn’t be too much of a task for anyone who has played the old titles in the series. You can tell Nihon Falcom tried to make this more accessible, and it makes sense since many smaller franchises have had more exposure on the Vita.

Ys: Memories of Celceta is worth your time. It’s fun, addictive, lengthy (clocks in around 20 hours), and easy to jump into. What it lacks in production value, it makes up for in its essence. I’ve finished Celceta, and am already looking into the past titles. There’s also an anime that’s worth looking into, especially since it expands on the character of Adol. Here’s to Ys, the series that never ends (and shouldn’t).

Memories of Celceta isn’t entirely new though. A re-imagining of Ys IV, the title boasts new graphics, new gameplay system, and a much more fleshed out story.
REVIEW SCORE
8
File Under: XSEED