Zeno Clash II
Developer: ["4012"]
Played On: PC
Genre: Beat 'em up , Fighting , Shooter , Indie
ESRB Rating: T (Teen)
Review Score:  5
Dan Cheer | May 7, 2013
The inclusion of state-of-the-art realism in modern videogames is a tricky topic with many avenues available to development teams keen to push the envelope.
Some will burn through millions of dollars ensuring that the latest and greatest shooter to hit the market has the most ultra-realistic environments available. Others will be content with engineering a lopsided museum of modern art and merely encourage players to beat up pig-creatures in an attempt to break a hermaphroditic parent out of jail. Developer Ace Team’s Zeno Clash 2 falls under the latter category.
Fans of the original will be pleased to discover that this very much continues the series’ trend. The first title was a cult hit popping with slick visual cues and crazy, otherworldly characters that flew under the radar for many. Zeno Clash 2 aims to correct that, with a steady concentration of new, expansive landscapes, even wackier cohorts and action on a much grander scale. 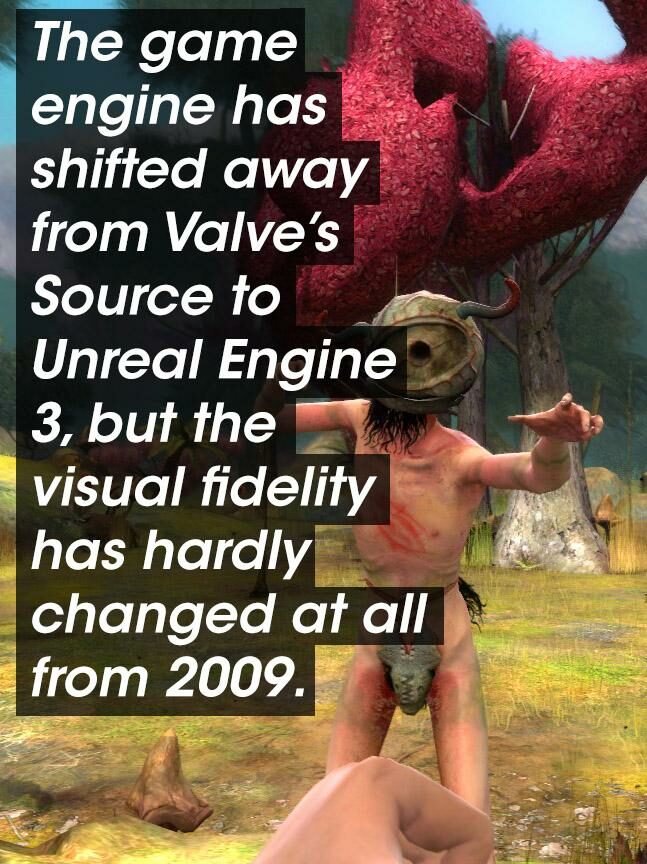 There are enhancements to be found in the combat system too. Extensive use of combination attacks tied into a power meter are tricky at first, yet become steadily more natural as time passes in the bizarre world of Zenozoik. It’s a world where very little makes sense – neither the story nor the accompanying cast of characters really ever manage to lever the weighty premise off the floor, but then if it’s coherent fantasy you’re after, you’ve come to the wrong place.
Co-operative play sees the protagonist traipse through the terrain with Rimat, his so-called sister, and one additional companion which can be either computer-controlled, or a friend invited in from the depths of Steam. There’s actually very little co-operation to be had, it’s essentially a loose collection of friends who punch things together. Hell, we’ve all been there before.
Sadly, that’s about the high water mark for this title.
The game engine has shifted away from Valve’s Source to Unreal Engine 3, but the visual fidelity has hardly changed at all from 2009. There’s still pop-in, animation issues and unrealistic physics, and whilst the player may be able to beat up half a dozen enemies at the same time, he’s singularly unable to hurdle over so much as a one-foot wall. Graphical quality may only be a small element in a much larger picture, however lazy implementation and noticeable faults are harder to ignore.
The protagonist Ghat is voiced ably, but whoever voiced Rimat has the vocal complexity of Janeane Garofalo in a coma. The rest of the cast is tragically short on talent too, but as the in-game map is as minimalistic as the environments are hedonistic, you’ll spend too much time running about in circles searching gawping at structures and searching for the next waypoint to pay them much heed.
The landscape may resemble an explosion in a dollar store, but in attempting to pad out gameplay time by revisiting environments too much is explained that should have remained mysterious. By going back to the same subject matter, its relevance as avant-garde tomfoolery is much diminished, and with a purpose, it ceases to become art in the first place. It’s just some place for a story, much like BioShock’s waterlogged Rapture the second time around.
This same rush to expand on everything that made the original game great ensures that combat is now reduced to an opportunity to smash buttons. Why bother committing to memory new and inventive combinations when the same old keystrokes always cause the same old outcome? With the exception of some boss battles, this repetitive, mushy fodder will likely make many feel as if they’re dining at a Taco Bell in the Louvre, albeit with less violence and healthier looking patrons.
It’s an exercise in futility these days to receive the kind of sequel most of us want to see made. Developers, for the most part, get started on projects such as this with the very best of intentions, only to watch those efforts crushed under the weight of budget constraints, problematic release windows, greedy publishers and a host of other effects that seem destined to scupper the efforts of all but the hardiest of studios.
This isn’t an attempt to excuse Ace Team, because Zeno Clash deserved a better sequel, that much is obvious. But for many, the opportunity to revisit this insane world in any capacity will be welcomed, and for those people the numerous problems will act as barely a distraction against the already bonkers and utterly broken backdrop that is Zenozoik.

This isn’t an attempt to excuse Ace Team, because Zeno Clash deserved a better sequel, that much is obvious. But for many, the opportunity to revisit this insane world in any capacity will be welcomed, and for those people the numerous problems will act as barely a distraction against the already bonkers and utterly broken backdrop that is Zenozoik.
REVIEW SCORE
5
File Under: