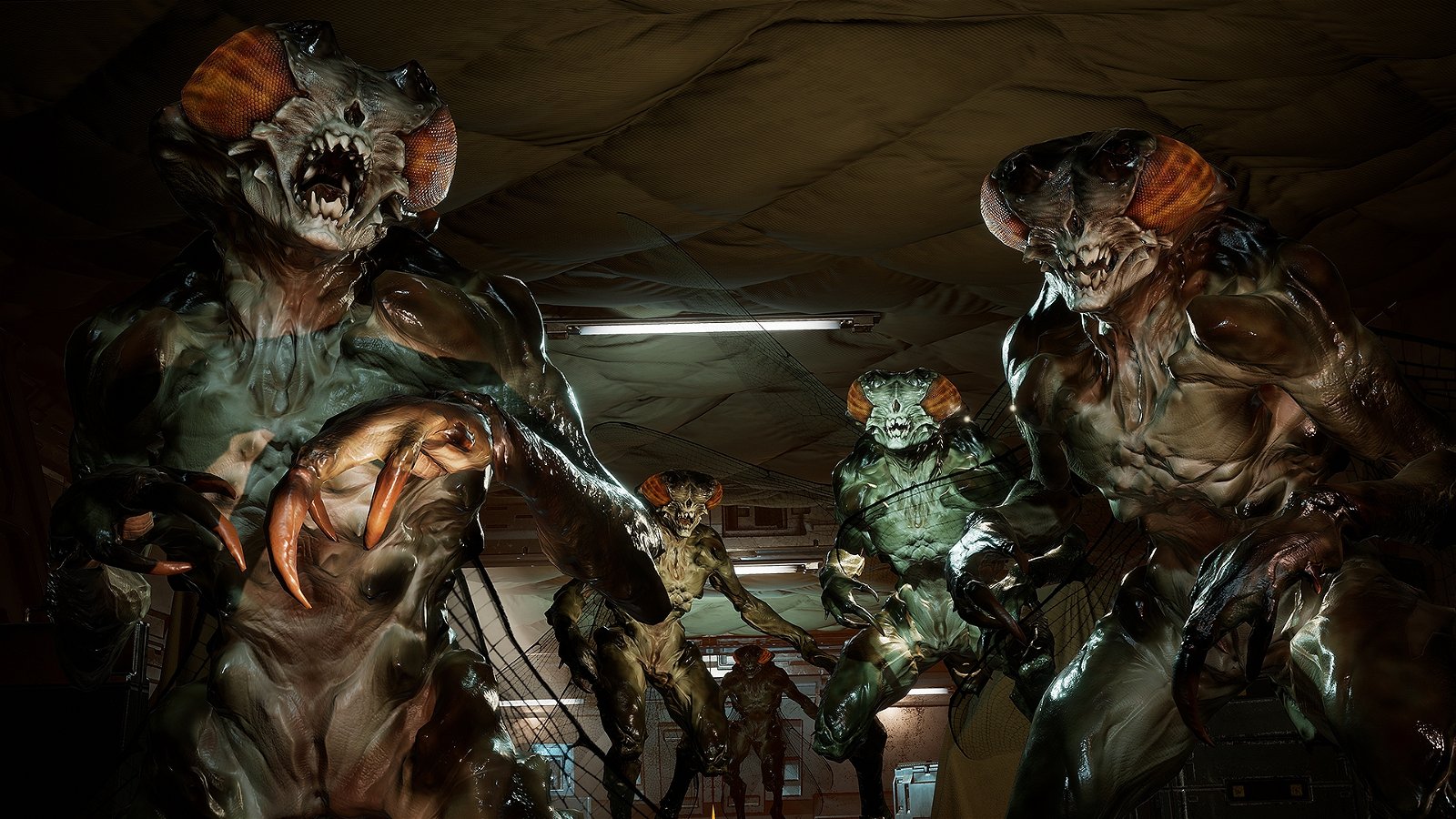 Drifter Entertainment, a studio composed of veterans who worked on some of the biggest FPS properties in the industry, such as Halo and Doom, have unleashed their first VR title, Gunheart, and the influence from those aforementioned titles definitely shines through.

Gunheart at its core is an arcadey first-person VR shooter, which on paper, may sound like a bad idea, especially considering how finicky and temperamental VR can get, yet, Drifter has managed to create not only a smooth and action-packed title, but one that is fun to play, even without VR enabled.

The world is in ruin thanks to an invasion of insect-based aliens known as Anthromites. The player assumes the role of a recently deceased individual of dubious gender who instead of dying, has had their brain transplanted into the body of a corporate-owned cyborg body. Of course, like any greedy futuristic corporation, players are tasked with eliminating as much of the alien threat as possible, in order to earn enough cash to literally purchase their new literal-lease on life.

If this sounds a little silly, that’s because Gunheart doesn’t really take itself seriously, instead, it embraces all that is pulpy while delivering some rather funny dialogue quips intermingled with the average but commendable action-oriented background music.

The story isn’t especially important, instead, it acts as more of a vehicle for giving players a reason to go out and just-about destroy everything that has a pulse. Instead of following a campaign structure, Gunheart puts players into a hub world in which they can then choose different missions, PVP matches and an endless horde mode that ramps up the difficulty as well as the rewards. Rewards come in the form of cash, which can be earned by playing through the various missions, either in normal, elite or speed modes, with the latter two ramping up the challenge or requiring players to complete the level as quick as possible.

Cash is used to unlock weapons and weapon modifiers, such as targets that explode after they are killed, giving a nice AOE or splash damage towards surrounding targets.  The weapons themselves range from your typical SMG style pistols to crossbows and rocket launchers,  better yet, all weapons can be dual-equipped ala Serious Sam or Wolfenstein — with my favourite combo being the shotgun with the SMG, something I found ideal for both point-blank shots and more run and gun scenarios.

Gunheart features impressively tight controls, similar to titles such as Doom 2016, pressing the shift key also grants players the ability to teleport, which not only helps alleviate VR motion sickness but makes some of the harder parkour challenges, doable.  I found the controls the best part of Gunheart due to never feeling restricted or hampered due to the input, something that often seems to plague VR titles.

Another area in which Gunheart shines is in its visuals, featuring bright and colourful comic book like environments and enemies that look like they were ripped straight out of the best of the best selection of B-movie monsters available.  Drifter Entertainment has somehow managed to make a game that doesn’t look like it was made with VR in mind, instead, Gunheart feels like a solid arcade shooter that just so happens to support the fledgling platform.

Gunheart also features online multiplayer in the form of co-op play and PVP, unfortunately, aside from a few co-op missions, I was unable to get any games working for the PVP portion of the title — regardless, the co-op missions went smoothly, making later missions feel more achievable and even helping reduce the time needed for completion, in other words, it was fun.

Sadly, Gunheart is not a perfect game, with the two biggest issues for me, manifesting in the form of lackluster AI and a lack of interesting environments. The AI in the game is by no means the worst I’ve seen in a shooter, however, most enemies tend just stand in place or worse, be caught with their pants down, staring at the wall. Some of the bigger enemies were better but not by that much, instead, the only time I found myself losing a life was when the screen filled with targets, rather than intelligent encounters with one or two individual enemies.

Aside from the hub world, most of the actual stages seemed to take place in the same general vicinity, that being a large rocky mountain terrain, punctuated with a few generic looking bases and some more cavernous grottos filled with bug-eyed aliens. Again, by no means was this a huge knock against Gunheart, but it would have been nice to see a more diverse selection of areas, especially due to the structure of missions and how they’re broken up into different levels, rather than one persistent world.

Gunheart is a game that is a must play for anyone that has a VR headset, for everyone else, the game is at least worth checking out for those looking for a title that captures the look and nuances of classic shooters in a decidedly arcade-feeling game.

Gunheart is an over-the-top arcade shooter that plays excellently in both 2D and VR modes, thanks to the inclusion of some tight and fluid controls.