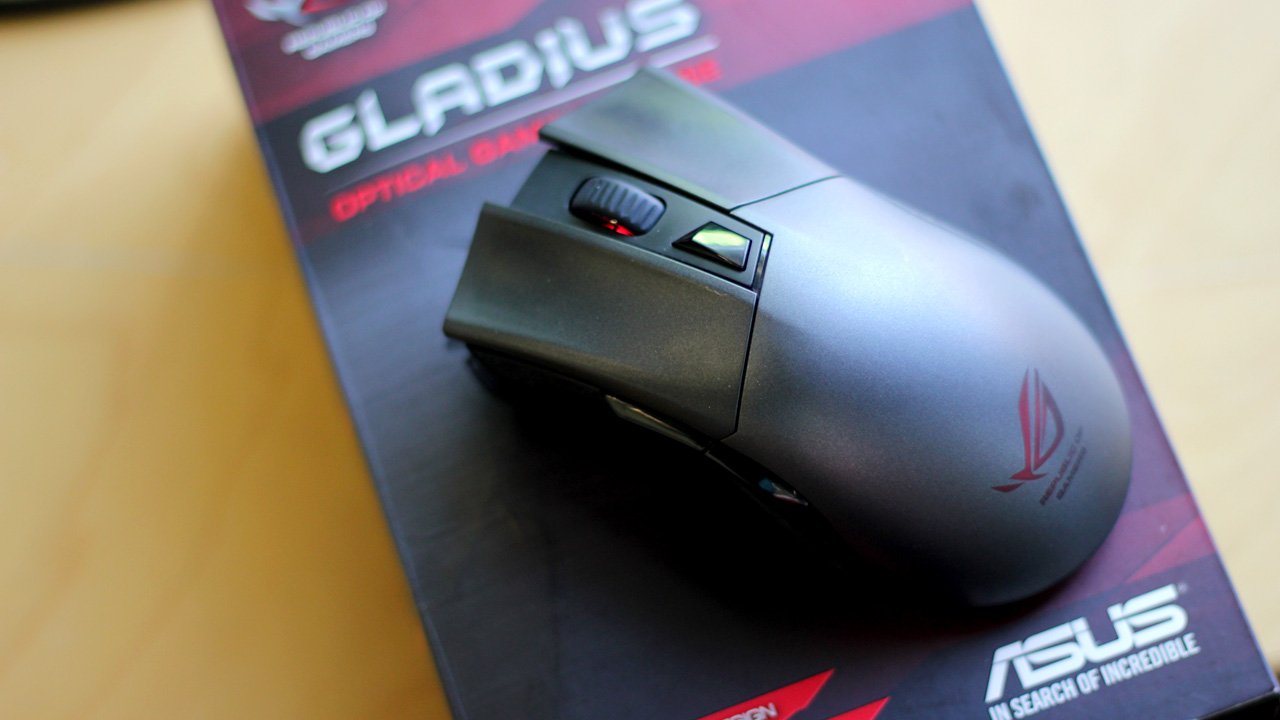 The Gladius is the new mouse offering from ASUS and the first to carry their prestigious Republic of Gamers badge. Moreover, it is the physical embodiment of everything I’ve come to trust, respect, and adore about the ROG line. Simply put, it’s the best gaming mouse I’ve ever used. That’s high praise from someone who’s been using the Deathadder series of Razer mice for the last eight years.

Having spent quite a thorough amount of time with it, from RPG gaming, to Photoshop work, to the new Unreal Tournament, I’ve yet to find a single flaw with its design. It really does seem like they’ve thought of everything when designing it and the attention to detail with the Gladius simply boggles the mind. Sure, things like the 6400dpi sensor, the braided cable and the Teflon feet are par for the course with modern gaming mice, and the hyper-responsive switches and excellent button placement can be expected from a really serious one, but it’s the extras that really set the Gladius apart.

For example, the software suite, known as the Armoury has the usual things like button reprogramming, sensitivity and polling rate control, as well as lighting control, but I’ve never before seen an option to independently change acceleration and deceleration settings. Nor have I seen built-in adjustable “angle snapping” that subtly corrects mouse movement to keep from straying away from the vertical or horizontal axes when moving along them. Hell, that’s bordering on cheating. It’s also the first mouse in the world to offer a polling rate of 2000. That’s two thousand positional updates a second that the mouse can send to your PC, which is double what any other gaming mouse currently offers. Finally, while I have seen mice that can be calibrated to specific pads, it’s the first time I’ve seen one that has the option to learn a custom surface. Oh, and the mouse itself has internal storage to save your favourite profile so you can bring it with you without needing the software. How have I not had that in my life before now?!
Fancy software isn’t all that the Gladius brings to the party, though, as most ASUS products come with some extra goodies in the box that show just how much thought has gone into their hardware. The Gladius takes this to a whole new level. The cable from mouse to PC is detachable and can be replaced by an included three foot version for use with laptops so you don’t have a full six feet of slack jamming up your workspace. There’s a mesh carrying pouch to tuck everything into when you’re travelling. Even a spare set of those frankly amazing Teflon feet have found their way in there. Along with the ROG stickers, I was thinking that all of these things were pretty damn generous. It was all starting to make me feel quite special, if I’m honest. Then I discovered one last pack tucked into the box. ASUS provides an extra pair of switches with every Gladius purchase. I’m simply without words on this one. Killing switches is one of the very few ways to write-off a mouse, and in all my life I’ve never managed such a feat. ASUS stands so proudly behind this mouse that they’ve added not one, but two replacements in each box, along with the instructions on how to swap them out, should you ever need to. That stretches into undercutting their own sales. That’s sheer lunacy. That’s setting a new bar for customer satisfaction. In a nutshell, that’s what elevates ASUS products above all the rest.

Fancy software isn’t all that the Gladius brings to the party, though, as most ASUS products come with some extra goodies in the box that show just how much thought has gone into their hardware.