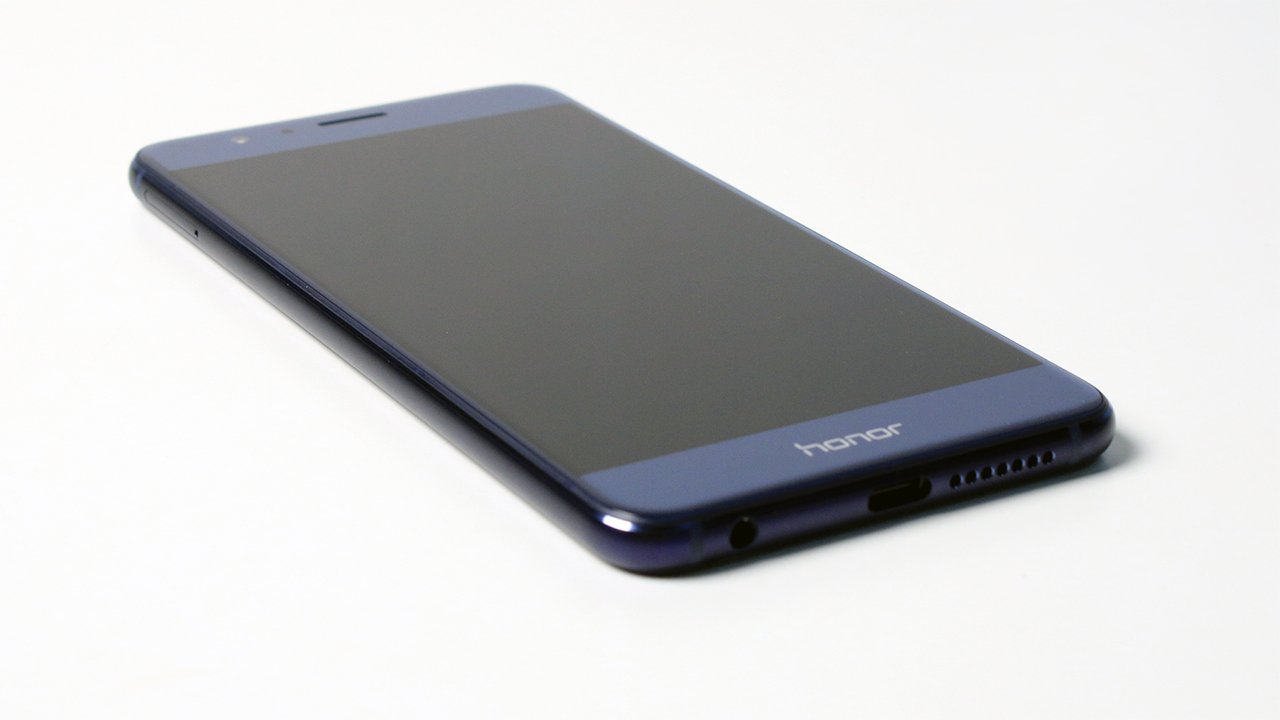 I’m a firm believer in the idea that you get what you pay for. Generally, if you pay $600 for a new phone, it will run better than something from a lower price range. Some feel you’re only paying for the name, but after reviewing so many mobile devices, I’ve learned price does make a difference. Then the Huawei Honor 8 came into my possession. Competitively priced at $399.99 USD, with an amazing camera, and a functional, sleek design, the Huawei Honor 8 could be the sleeper ninja phone you didn’t know you needed.

Starting with its design, the Huawei Honor 8 comes in a variety of colours to choose from with white, black, blue and gold options. Our review model was blue, and I was actually surprised how sophisticated it looked with a matte finish, even with a less than professional colour. The Honor 8 borrows a lot from other more established smart devices with a simple, rectangular design, just a little thicker. Its dimensions are 145.5 x 71 x 7.5 mm, which doesn’t make for a huge phone, but it is a little beefier than say, the iPhone 7. There is a packed in “case” that protects the edges of your phone. It might make a difference depending on how high the device drops from, but it also adds extra grip so it’s easier to hold. Even with that extra size, the Honor 8 is still relatively light at 153g. Changing only slightly from the Honor 7, it’s hard to really distinguish the two. You won’t find any buttons along the face, with the “home” button actually located on the back underneath the camera. This also doubles as a fingerprint reader, and can be programmed for shortcuts to other apps, making it weirdly efficient for what it is.

With all of that on the back of the Huawei Honor 8, there is more room for its 5.2” screen. Yes, that does make for a smaller screen compared to its competitors but it’s used very efficiently with a 72.5 per cent screen to body ratio. Its display is actually very high-end as well sporting a 1080×1920 resolution that makes videos and pictures look crisp and clean. You’ll want to make the most of that since the camera is honestly one of my favourites out of those I’ve used. The dual 12 MP cameras, laser auto focus, and dual tone flash makes pictures look sharp and colours vibrant. The video recording is nothing to downplay either, with the ability to record video at 720p and 50 FPS.

Everything on the surface looks great for the Huawei Honor 8, and when you go underneath the hood, it’s not too shabby either. Running on Marshmallow, this device uses the latest Android software. Inside, it sports a HiSilicon Kirin 950 with an Octa-core, 4×2.3 GHz Cortex-A72 and 4×1.8 GHz Cortex A53 CPU. Using a Mali-T880 MP4 GPU, the video card could be better, but it could be much worse as well.  To put all that data into more readable terms, the phone operates well in almost any given situation with next to no lag and fast loading times. It was a pleasure to play apps like Fallout Shelter, or even stream Netflix. In terms of performance, this is a great option, even compared to more high-end devices. While this phone is more of an economy model as opposed to a luxury device like the iPhone,  it manages to hang with the big boys in the functionality department.

Its battery life is surprisingly long as well, lasting a whole day in my test with normal use. Sporting a non-removable Li-Po 3000 mAh battery, the Honor 8 also has fast charging, hitting about 5 per cent in half an hour, making it ready to go in a short time.

Obviously when you compare it to something like the iPhone 7, or the ZTE Axon 7, the Honor 8 isn’t quite up to snuff. Still, it’s one of the biggest surprises of the year. This isn’t a luxury model by any means, but it is a high-end phone with a mid range price, and you won’t be disappointed by what Huawei packed into its surprisingly economic smart device. This should be on your radar as an affordable, yet amazingly functional smartphone, and I couldn’t be happier with it

It’s almost hard to believe Huawei packed in so much at such a low price.