There’s Style, But Is There Substance?
SCORE: 7/10 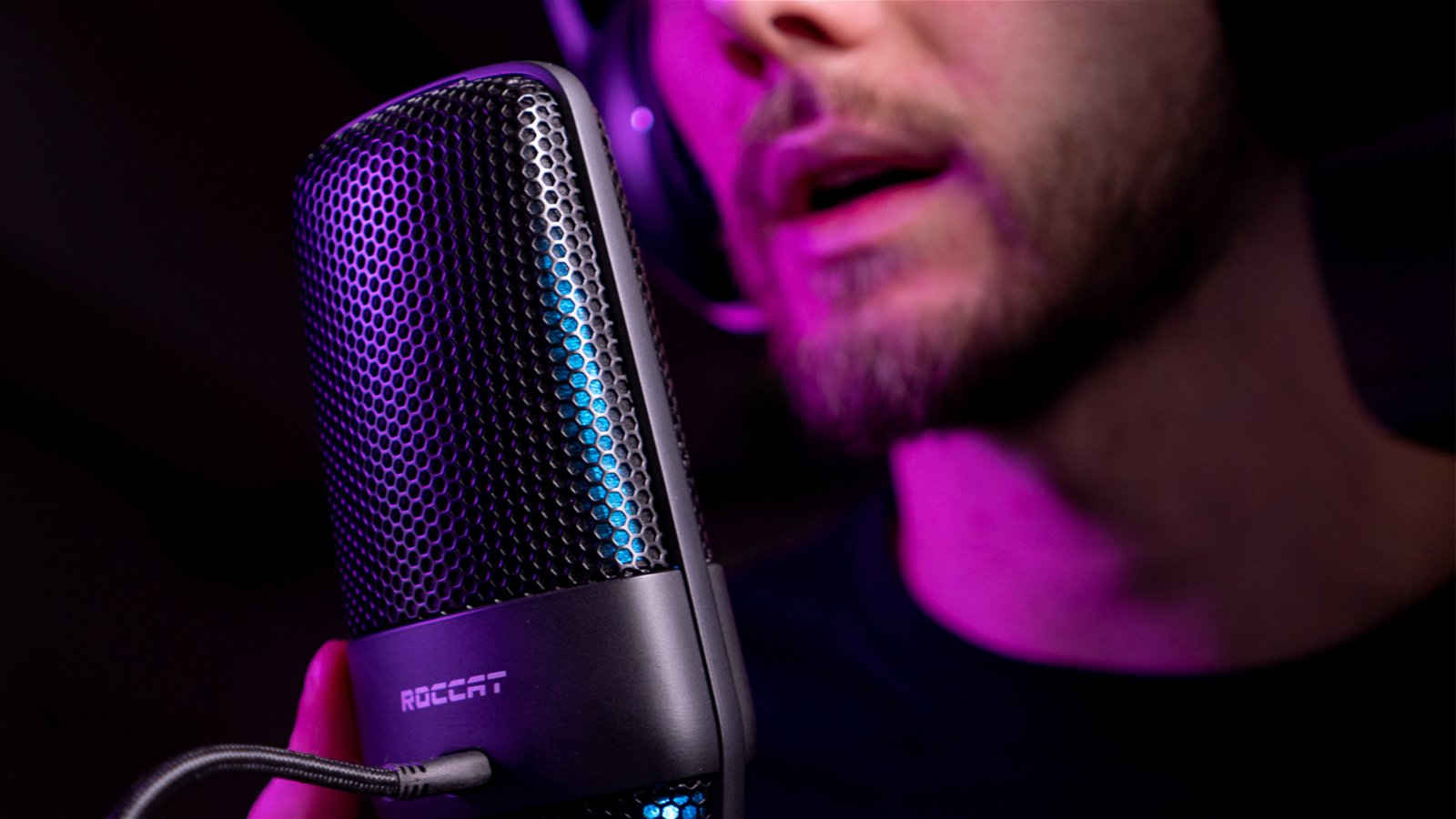 In the past, I have reviewed USB microphones built into stands and shared my concerns about them in certain scenarios, particularly the need to keep the mic further from your mouth, potentially picking up extra room noise and affecting your quality. But what if a mic was built into a stand, but allowed you the chance to mount it to a mic arm?

ROCCAT Gaming has the mic for you and, as luck would have it, it is the only microphone they offer. The ROCCAT Torch is a stand-mounted USB microphone with on-board controls, but the mic can be removed from the stand, mounted to an arm, and brought up to your mouth where it belongs.

The design of the ROCCAT Torch is a beautiful mix of classical and modern, with a unique shape and integrated RGB, the mic is truly beautiful. Its shape is vaguely reminiscent of the torch mics of old found in classical studios, but made more sleek for the modern creator.

The RGB on the mic serves more purpose than looking cool. The lights on the sides of the mic are actually gain meters, giving you an on-mic visual of your levels. On the front, The ROCCAT Logo is lit up as well. My only issues are that the bulk of the RGB is visible only to the creator and not a viewing audience and I wish the level indication wasn’t the one thing your audience could see. Generally speaking, they don’t care.

Also available for your RGB pleasure is ROCCAT Neon (currently in Beta, replacing their Swarm software). The software, utilizing their AIMO technology, connects all Roccat devices, be it a keyboard, mouse, headset, or the Torch itself and syncs their RGB for one smooth, cohesive look. When testing, only the ROCCAT Logo was affected by the software.

“The design of the ROCCAT Torch is a beautiful mix of classical and modern, with a unique shape and integrated RGB, the mic is truly beautiful.”

The colours on the sides of the ROCCAT Torch appear to be set, only changing based on the polar pattern chosen. The polar pattern dial, found on the mic stand, boasts three polar patterns, but it is really only two. It has a cardioid and stereo with their third “polar pattern” being their proprietary whisper pattern, which is just cardioid with a gain boost allowing the user to speak quietly and still be heard loud and clear.

Also found on the stand is an off switch, which is integrated into the polar pattern dial, a volume dial for your headphones (when plugged into the stand) and a gain fader. On the back of the stand, you’ll find a 3.5mm headphone jack for no latency monitoring, two USB-C ports, one going to the mic and the other going to the PC, a control for the brightness of your RGB, and a sensitivity dial for how far you can be from your mic to mute it.

That’s right, The ROCCAT Torch offers a contactless mute system. Just wave your hand over the top of the mic, and it will mute. The RGB will shut off and the LED display on the front of the stand will change from LIVE to MUTE.  You can also press down on the volume knob for a more traditional mute.

“… The ROCCAT Torch offers a contactless mute system. Just wave your hand over the top of the mic, and it will mute.“

One thing that was missing for me, given that the mic stand had so many controls, was an additional auxiliary input, similar to the one that the Mackie Chromium offered. Having the necessary base might as well offer us as much as it can.

The ROCCAT Torch does offer a plug and play setup (provided you don’t wish to use the Neon software, which is not necessary for the operation). The most unique aspect of its design is the ability to remove this mic from its integrated base and mount it to a mic arm. The only caveat to this is that the mic is still tethered to the base.

“One thing that was missing for me, given that the mic stand had so many controls, was an additional auxiliary input, similar to the one that the Mackie Chromium offered.”

The good news is you maintain the controls of the stand even when mounted. The bad news is that you have a bit of a cable management issue on your hands. A shorter extra cable (maybe 1.5 or 2 feet) would still allow you to place the stand somewhere out of the way. I wish that you could connect directly from the mic to the PC, sacrificing the controls.

Also, an issue is the small notches on the USB-C cables which are necessary to plug into the deeply recessed USB port on the mic itself. This prevents you from using certain third-party cables. Something to note is that when the microphone is finally plugged in, don’t expect the mic to just power up. It needs to be the active mic on your application of choice for it to go live.

The dual capsule build and built-in pop filter delivers quality audio without the need for any extra peripherals. Its 24-bit rate is fairly standard, but its 48 kHz sample rate is lower than some offer (e.g. the Elgato Wave 3 offers a 96 kHz sample rate), but it meets the requirements for most streaming platforms.

At $99.99 USD, the ROCCAT Torch sits roughly in the middle of the lite microphones and the high-end ones, but it adds some style and control at this price point that isn’t really challenged. What you need to weigh is whether the RGB is worth it since you are the one seeing the bulk of it, the extra cables required to mount the microphone are worth it to you.

The Roccat Torch is a more stylish microphone at a more affordable price than many competitors. Roccat’s next mic could show major improvements if some of the concerns discussed are addressed, but none of these issues are a showstopper. The mic looks nice, sounds nice and will be a good addition to any content creator’s arsenal, especially if you have other Roccat peripherals to pair with the mic.