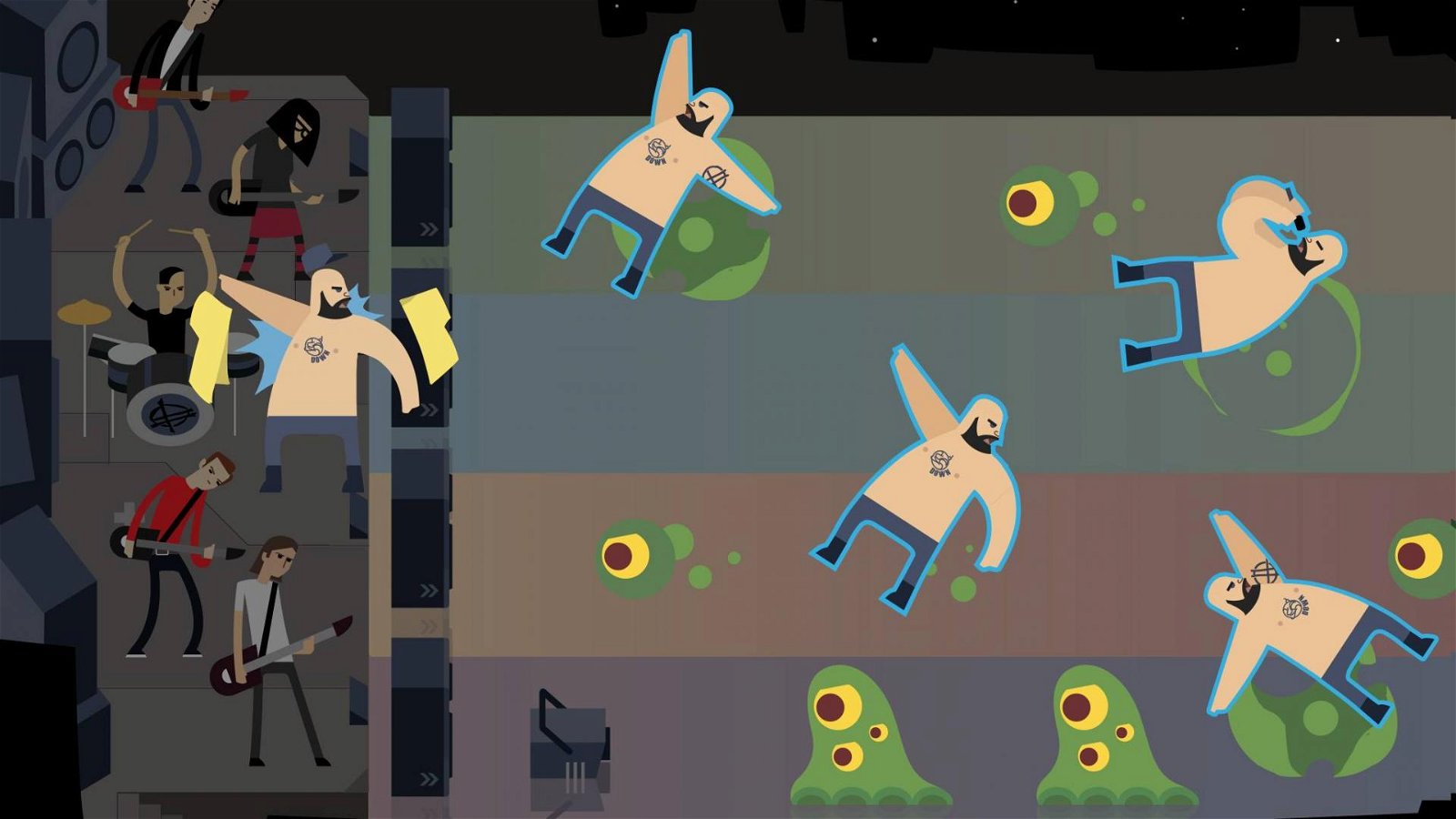 Loud on Planet X is a great example of why mixing genres works. Many developers have mixed similar genres such as Action and RPG, or Shooter with… well, everything. So few games have as much of a contrast in genres as Loud on Planet X, but the game proves that this mix creates a beautiful lovechild of a fast-paced rhythm game and a tower defense.

The objective of Loud On Planet X is to protect four lanes of speakers from an onslaught of aliens for the duration of the song. Players tap along to the tempo, usually in conjunction with the drums or bass, while strategically planning which lanes need the most immediate attention. If one of your lanes is suddenly swarmed, you don’t get to rapidly tap the aliens away – you have to do so to the beat of the song. This forces players to plan ahead and determine which aliens to blast first; if you can keep the rhythm under pressure, that is.

It’s hard to stay calm and focused on tapping along to the music when a crowd of aliens are inching their way towards the stage. Often, the pressure of the horde approaching my speakers made me miss some notes. Missing notes allows the horde to continue their approach, which added more pressure and made me miss more notes. It’s a vicious cycle that quickly taught me to prioritize my taps to whichever lane was in most danger.

The horde is comprised of several types of unique aliens that all share one thing in common: They hate being blasted in the face with sweet, sweet music. Some of them speed up once they’ve been hit, some explode green goop all over the screen to block vision and some split into smaller, faster aliens once defeated. Each alien takes a different number of blasts to destroy, indicated by the number of eyes on their body.

Each artist has a different ability to take out enemies, but their effect is the same: Filling up the LOUD gauge at the top of the screen unleashes an attack that destroys all on-screen enemies.

Unlike other music games, increasing Loud‘s difficulty doesn’t add more notes or increase the speed at which you play along to songs. Instead, doing so spawns more aliens during the song. However, your ability to fend them off remains the same. The tempo at which you play each song never increases, so on harder difficulties each beat counts.

Because you aren’t playing an instrument in Loud On Planet X, the songs with faster tempos were often much more fun. Songs with slower tempos sometimes felt like a drag, especially on easy mode, because I started to feel like a human metronome. One…Two…Three…Four…

On medium difficulty and above, there’s never a dull moment. I’d play the slowest song in the roster and still be sweating. In fact, after numerous attempts, I only ever completed one song on hard mode, and my speakers took some serious abuse throughout my attempt.

Hard mode is seriously tough. The spawn rate of aliens, especially those quick, little rascals, is dramatically increased, while the entire horde of aliens receives a noticeable speed boost. The fun thing about hard mode is that neither the song pace nor the tempo changes; the difficulty ramps up by forcing players to manage their lanes efficiently to succeed.

This game is no Guitar Hero or Rock Band, but it isn’t trying to be – and that’s a good thing. Loud On Planet X features 14 current indie artists, each of whom provide two tracks to the game. The soundtrack is fantastic, and while I already knew and enjoyed some of the artists like Lights and July Talk, it expanded my horizons to new, talented artists.

Faster songs are a lot of fun. As songs speed up, so does the spawn rate of the aliens – so when a song starts to pick up, the difficulty ramps up as well. I really appreciated the tower defense gameplay matching the intensity of the song.

Most of the aliens only take three or four blasts to kill, but on some songs it could take a few seconds blast four times with the tempo. This becomes even more difficult when you panic, because missing even one note could cost you a whole lane.

The power-up items are useful, but I almost never noticed that I had acquired them. When I did notice, it distracted me from the tempo and threw me off, so I mostly avoided them. Likewise, repairing speakers could be handy, but I never really found a good opportunity to do so. This is especially noticeable on hard mode, where every so often enemies would destroy one of my speakers, forcing me to leave my other lanes vulnerable while I repaired it.

Loud On Planet X has a fantastic soundtrack, clean, minimalist visuals and is a great blend of tower defense and music. The gameplay feels like Guitar Hero or Tap Tap mixed with Plants vs. Zombies, and it absolutely works. While the easy mode is sometimes a little too easy, medium certainly offers a challenge, and hard should only be attempted by Loud masters. As a whole, Loud is a phenomenal showcase for indie artists and a fun experience for tower defense lovers.

Loud On Planet X is a fun and different rhythm game with a great roster of indie artists. It's well worth the small asking price! 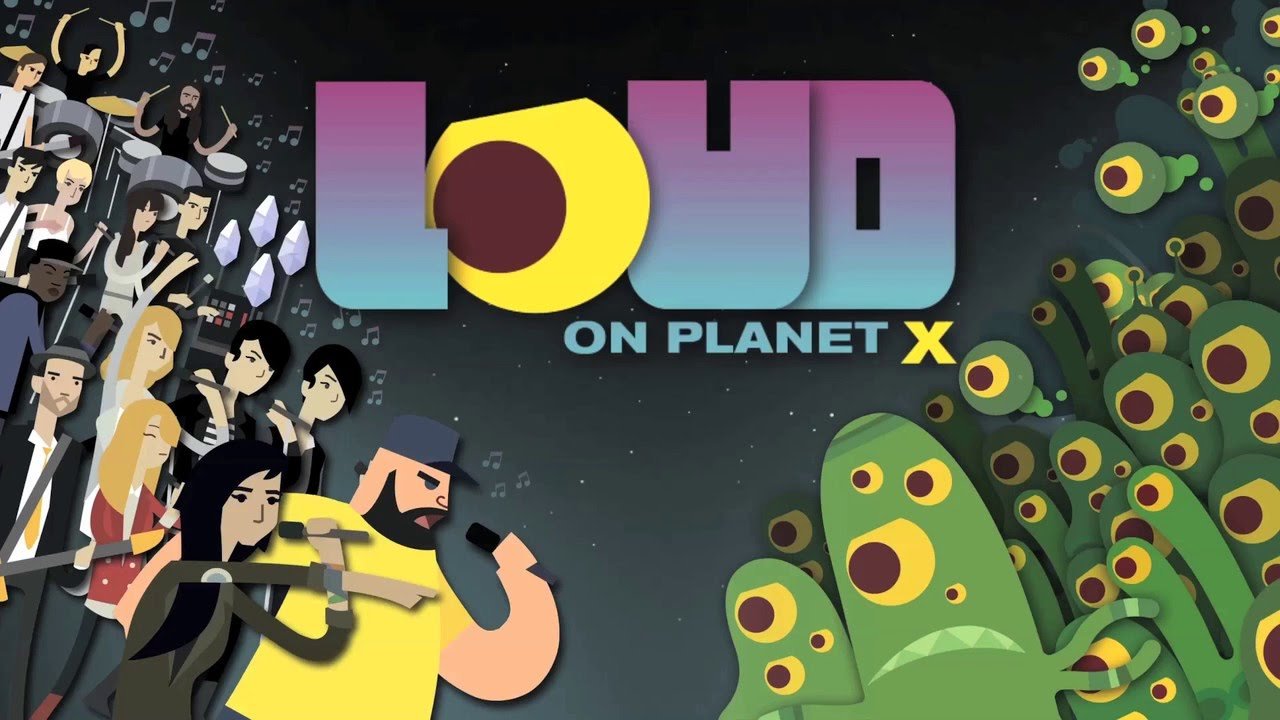