Lumines Electronic Symphony is a time consuming, perspiration inducing, foot tapping, edgy experience, in your PlaysStation Vita. If you’re looking for an upgrade from the original 2005 Lumines, or just craving an energizing puzzle game, it won’t disappoint.  My personal take on this game is, “a nightclub for the puzzle blocks and a pain in my socks.”
Lumines is an unending parade of puzzle blocks that the player must clear away by grouping the similar blocks together. It’s one of the more nerve racking gaming experiences in the genre today. The game doesn’t save the player’s progress; you just play until the screen is full of puzzle block and that happens, it’s game over. When that happens, you have the option to quit, record your score and start over from the beginning or, forgo recording your score to continue.  Continuing erases and resets your current game score.

I felt torn when my screen filled up with blocks and I was asked whether I’d like to continue or quit, because the main goal of Lumines is about the high score on the leaderboards. I wanted to have my score recorded, but I also wanted to see what lay ahead. “Skins” or levels, can be unlocked two ways, either by beating the skin in Voyage mode or using experience points acquired during play.  Leveling up also allows you to unlock different avatars each with their own ability. Avatars, aren’t just for show either. They occupy the bottom left portion of the screen and each one is equipped with abilities that will help you clear away blocks. When you notice your screen is filling up, just tap the avatar for a little help. Avatar abilities range from generating solid coloured blocks, shuffle blocks, chain reaction blocks or freezing time for a few seconds. I found using the avatar’s abilities really did help to advance my game, and they cheer you on by dancing in the corner.
Lumines offers more than just the main Voyage mode, there is also a Duel, Master, Stopwatch and Playlist modes. Compete against someone else in Duel mode changes your avatar’s function to hinder your opponent rather than help you. Stopwatch mode consists of short, time limited games. I found this a great way to earn some quick experience points without pressure, but if pressure is what you’re looking for, play Lumines in Master mode. It’s a quicker paced game without the aid of an avatar. Playlist mode allows you to create your own playlist from the skins you have unlocked, which lets you play skins you have not seen yet in Voyage mode.  Playlist is also an excellent way to create a shorter game for yourself if you have a limited amount of time.  I’d create a ten song playlist when I only had half an hour to sit and play, this allowed me to get experience without the guilt of choosing the quit option in Voyage mode.

Lumines utilizes both the rear and front touch screens of the Vita. The front screen can be used to rotate and push your blocks around, although you will find you will quickly abandon this for the buttons as the touch screen doesn’t allow you to act quickly enough. If you tap the rear touch pad, it will allow you to recharge your avatar’s abilities. The only problem I had with the game’s mechanics was scrolling blocks side to side could be tricky. They would rapidly launch across the screen if the button was held, making it difficult to correctly place the blocks.

The visuals in Lumines Electronic Symphony are eye catching with an array of vibrant, glowing colours. The puzzle blocks themselves remain simple, but the backgrounds can be lively or even distracting. The overall graphics in Lumines are crisp, clean and look sharp on the PlayStation Vita.
With Lumines, there is no shortage of electronic beats coming from your Vita as you rotate and drop your puzzle blocks. The large track list could easily rival that of karaoke game, although the selection of music is not extremely diverse. 90% of the songs could easily fit into a club on a Friday night without problem. If you don’t like a song, the feeling is usually brief, as you’ll either become so engrossed in the game you no longer notice the track, or you’ll move onto the next skin before you need to turn the volume down.  Your block moves also add to the music, but it’s not normally obnoxious. Sometimes you‘ll barely hear any difference during gameplay, other times it will be a striking counterpoint to the music. The audio quality itself is clear and remained high quality at both a lower and higher volume setting.

Overall, the gameplay, controls and goals of Lumines are simple, the graphics are good and the music is infectious. Regardless of skill level or age, Lumines Electronic Symphony is an early, must-have for any puzzle fans looking for something to show off what their Vita can do.

Lumines is an unending parade of puzzle blocks that the player must clear away by grouping the similar blocks together. It’s one of the more nerve racking gaming experiences in the genre today. 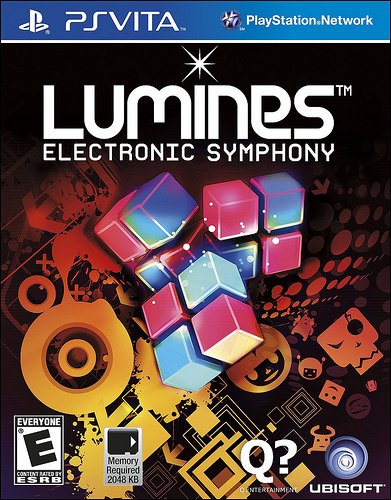