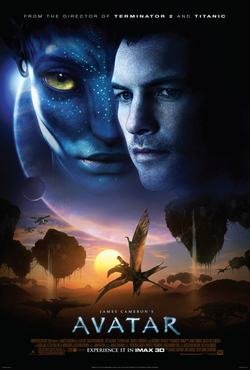 For the longest time, I was an Avatar denier. As good as writer/director James Cameron is, could he possibly live up to the hype of this $400M sci-fi opus? Could this film successfully carry the cinematic weight of all its groundbreaking technology? Between the fact that this was Cameron’s first narrative feature in nearly a dozen years, and all the media chatter that surrounded the new 3-D motion capture capabilities, it should be enough to give even the most egocentric of filmmakers a well-deserved nervous breakdown. But come on, this is James Cameron we are talking about, and anyone bold enough to declare himself King of the World on Oscar night is bound to find the gusto necessary to meet any and all expectations.

So it is with Avatar, which not only fulfills the promise of its cutting-edge visual innovations, but elevates the entire movie-watching experience to a whole new level. However, on the story-telling level, the film is not without its flaws. For one thing, it is slightly derivative of other James Cameron movies. On a visual level though, the special effects are almost literally out of this world.

Brilliantly realized, Avatar benefits from the same kind of obsessive attention to detail that drove James Cameron to hire the same China-manufacturers who supplied the Titanic with fancy dishes to produce the place settings for his set design. Simply put, Avatar is the most comprehensive epic to be put on film since the Lord of the Rings trilogy.

The film is set on Pandora, a life-filled moon which orbits a gigantic gas-based planet several light years from our solar system. On this life-sustaining satellite, a nameless corporation is dedicated to the extraction of a valuable mineral called, in an inspired bit of wordplay, Unobtanium. But unfortunately for the earthling businessmen, Pandora’s indigenous population stubbornly refuse to either be re-educated or relocated. Meanwhile, a group of scientists, led by Grace Augustine (Sigourney Weaver), are attempting to study the planet and its most advanced inhabitants, the humanoids known as the Na’vi.

One of the new members of the team is Jake Sully (Sam Worthington), a paraplegic Marine who must take the place of his deceased twin brother, and get behind the proverbial wheel of a man-made avatar. The avatars, cloned from a combination of Na’vi and human DNA, are fantastically expensive creatures to produce. This explains why Sully, who shares the same genetic material as his identical sibling, is recruited to fill his place, despite the fact that he is virtually untrained and unprepared for the mental and physical rigours of Pandora.

In a slightly predictable fashion, it is not long before Sully finds himself emotionally invested in the Na’vi cause. Taught by the Na’vi princess, Neytiri (Zoe Saldana), Sully learns the ways of her people, and comes to understand their deep connection to the planet’s diverse range of life-forms. In fact, it is precisely the complex richness of the Pandoran landscape which proves that Cameron’s dedication to the Na’vi extends far beyond the creation of a simple backdrop. Despite the fact that most of the scenery is computer generated, Pandora remains so vivid and tangible that audiences cannot help but buy into its perceptible reality. Avatar is an immersive experience tailor-made for the big screen. It is a larger-than-life adventure that dares to be duplicated, even though it may not be possible to do so.

With that being said, there is no denying that Cameron directed the bulk of his energies into visualizing his world than he spent tightening his screenplay. Avatar plays like Last of the Mohicans meets The Happening, with a dash of the Endor scenes from Return of the Jedi. Borrowing elements from another James Cameron film, Aliens, there are certain characters that seem vaguely familiar.

“Avatar is a bombastic thrill ride…”

For instance, there is the uncaring corporate administrator (Giovanni Ribisi) and a feisty Latina compatriot (Michelle Rodriguez). And speaking of the actors, Sam Worthington once again delivers another confounding performance, which leaves this critic wondering how this relatively unknown actor continues to find himself substantial leading roles. However, perhaps Worthington’s blandness is precisely why he was cast in this film, in order to display a stark contrast with the exciting and vibrant world of Pandora.

But in the end, the thing that separates Avatar from other special effects movies is the state-of-the-art motion capture technology. On many occasions, the audience can sense the real-life actors beneath the computer-generated avatars, and can appreciate Cameron’s synthesis between what is man and what is man-made. This is no minor trifle, especially considering the bulk of the film’s success hinges upon the Na’vi appearing as lifelike and relatable as possible.

The execution of the movie matches the grand vision, even in spite of all the script hiccups along the way. Avatar is a bombastic thrill ride that has to be seen to be believed, and one that has to be seen in 3-D to be appreciated. James Cameron is back, and in fine form, ladies and gentlemen. Here’s hoping that he doesn’t have to wait another 12 years for technology to catch up to his next bold cinematic vision.