A Whole Lot Of Babel 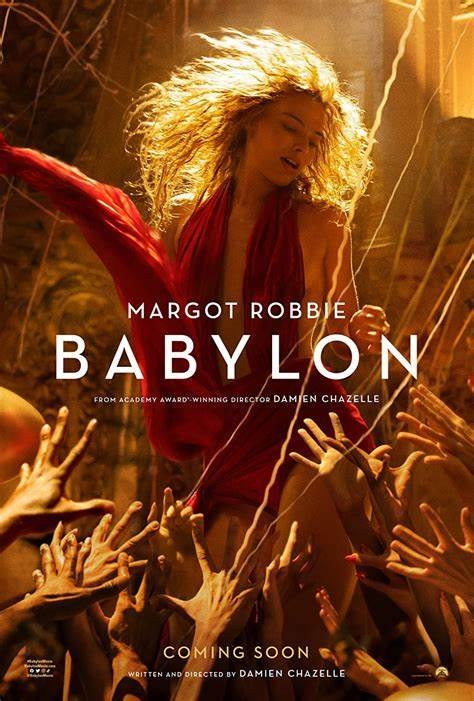 Set in 1920’s Hollywood during the dawn of Tinseltown’s Golden Age, Babylon is a loud, crass, and unapologetically lewd filmic exercise in excess, and I’m certain that if its Academy Award-winning writer and director, Damien Chazelle (Whiplash, La La Land, First Man) were to read that description, he would absolutely take it as a compliment. A spiritual antithesis to La La Land, Babylon is an ode to Hollywood’s silent film right before the advent of sound pictures (“talkies”), when it was still very much a Wild Wild West not only in how films were made but also how people lived and thrived in a community that wholly existed in service of making movies. Consequently, early Hollywood was largely free of traditional morals and societal constraints common in other parts of the country.

It makes sense then that Chazelle has chosen to tell his story through the eyes of five protagonists whose paths intersect at an opulently exclusive drug and sex-fueled party held at a secluded mansion in the California Desert. Manuel “Manny” Torres (Diego Calva) is a young, ambitious Mexican American immigrant working as a server, gofer and odd-job jack for the party’s organizer and film studio Kinoscope, when he instantly falls for Nellie LaRoy (Margot Robbie), a brash, hard-partying, aspiring actor who is having difficulty getting into the venue. Manuel uses his employee status to get Nellie past security and the two immediately hit it off as friends once they’ve both had a few hits of coke in the drug room and they start talking excitedly about their dreams of working in the movies, Nellie of course as an actor and Manny landing any industry job he can find, but ideally as a producer.

Meanwhile, Jack Conrad (Brad Pitt), a fading silent film star who has just split from his wife arrives to unwind (read: philander) before the final day of shooting his next big film for MGM, and happens to catch a performance by his colleague, Lady Fay Zhu (Li Jun Li), a Chinese-American actress and burlesque performer whom he considers a friend and occasional confidant. Finally, Sidney Palmer (Jovan Adepo) is an African American virtuoso trumpet player performing as part of a trio at the party is growing tired of his bandmates’ mediocre skills, hoping that this this latest gig will eventually lead him to his big break.

Long story made short, an incident at the party involving a drug overdose and an elephant (yes, an elephant) results in Nellie landing a vacant role for a Kinoscope film, while Manny ends up driving a car-less drunken Jack home and is invited by the actor to join him on-set for his big shoot the next day once he sobers up, with the outside possibility of some assistant work. Thus begins Nellie and Manny’s careers in Hollywood, which ultimately pull Fay and Sidney into their professional orbit.

“Set in 1920’s Hollywood during the dawn of Tinseltown’s Golden Age, Babylon is a loud, crass, and unapologetically lewd filmic exercise in excess…”

In a 2022 Toronto International Film Festival post-premiere interview with the festival’s CEO and Chief Programmer Cameron Bailey this past September, Chazelle referred to his film as “a poison-pen letter to Hollywood, but a love letter to movies,” which certainly tracks as many of Babylon’s most entertaining and standout scenes pay homage to some the greatest achievements of nascent Hollywood’s golden age, but also pull back the curtain to reveal much of the depravity, bigotry, desperation and human suffering that was involved in realizing those accomplishments.

Manny’s first day on the MGM set is a perfect example, where epic battle scenes are filmed using hundreds of unpaid, underfed of extras armed with medieval weapons, zero safety regulations, and with some extras even getting critically injured or killed on set. Yet amid that very chaos, we’re treated to a scene of Manny majestically riding a horse, pistol in hand, herding a mass of would-be-rioters back to work like a cross between Lawrence of Arabia and a sheepdog.

Later we see Manny rise to the occasion again, making a last-minute rush to the camera shop to secure the last 2709 film camera after all the cameras on set have broken, and getting it back into the German cinematographer’s hands just in time to capture the film’s final scenes before the shoot runs out of precious daylight. As a young film student who always hated shooting outdoors because of the constant dependence on natural light, I felt quite nostalgic watching those scenes and almost felt Chazelle had put them in there just for me.

“When Babylon isn’t exposing how the 1920’s Hollywood film sausage got made, the movie revels in its excess even further, pushing the envelope to the extremes of what is normally considered acceptable on film in just about every direction.”

Similarly, Nellie’s first day on a soundstage, which is one of many scenes in Babylon clearly inspired by its spiritual counterpart in 1952’s Singing in the Rain, lampoons to great comedic effect several of the technical challenges that filmmakers and actors alike struggled with during Hollywood’s transition to sound. Of course, Chazelle takes the gag far beyond its original scope into some very dark places, intentionally stretching out the number of retakes, gaffes and interruptions to the point that the crew’s patience with one another completely unravels and the normally mild-mannered Assistant Director loses his composure, unleashing deluge of death threats and anti-Semitic epithets and scatological comments at his subordinates.

When Babylon isn’t exposing how the 1920’s Hollywood film sausage got made, the movie revels in its excess even further, pushing the envelope to the extremes of what is normally considered acceptable on film in just about every direction. Full frontal nudity, sex acts, vulgarity, excrement and bodily fluids (thankfully all simulated), sadomasochism, animal cruelty (again simulated), you name it, Babylon has it, and Chazelle would not have it any other way, as his self-declared method of doing justice to Hollywood’s Golden Age origins is to hold back nothing and “bite the whole sandwich.”  It’s a brutally honest approach that an open-minded, seasoned filmgoer can at least appreciate.

Having said that, my big issue with Chazelle’s seemingly constant preoccupation with excess is that all three of the film’s principal characters feel as though they are adrift in a sea of visual distractions and lack the connective tissue to one another that the film needs to actually compel the audience to care about them and their personal journeys. In fact, Manny, Nellie, Jack, Fay and Sidney all seem like roulette balls on a spinning wheel that frequently criss-cross each other’s paths and briefly collide now and then, but they never stop long enough to form meaningful bonds with each other or other characters around them, denying us a glimpse into their hearts and true motivations.

For example, late in the film when Jack is deeply shaken by the news of a long-time friend and colleague’s death, he immediately reacts by verbally lashing out unprovoked at his third wife Estelle, an accomplished stage actor, for looking down on his profession even though she was generously providing him with helpful acting advice only minutes earlier. It’s a childish act on the part of Jack that ultimately dooms their marriage, but what makes even less sense is that at no point is the audience given a reason to believe that Jack’s departed friend was all that important to him. Out of the film’s entire 3 hours and 8 minutes of runtime, Jack spends no more than five minutes with him on screen, and talks with him for far less, instead asking for other colleagues like Fay to check in on him.

Likewise, I found it difficult to care or root for Manny and Nellie, despite actors Calva and Robbie sharing an undeniable chemistry on screen. The story goes through the motions of trying to make Nellie a sympathetic character, with plenty of dialogue insinuating that her tough childhood, deadbeat father and institutionalized mother all justify the giant chip on her shoulder, but none of that changes the fact that Nellie is also a reckless drunk and drug addict who only takes and never gives. It’s a character trait that makes Manny’s decade-long crush over her seem highly unrealistic, especially once Nellie and Fay become an item.

Even worse, neither Fay and Nellie’s relationship or the love triangle between Manny, Nellie and Fay are ever explored, leaving so many opportunities for gaining insight into all three characters (and thus a reason to care about what happens to them) on the cutting room floor. Once Manny has to step in, disappointingly not as a rival lover but a studio exec trying to rehabilitate Nellie’s public image, Fay is inexplicably dismissed and all but vanishes from the story completely.

“In the end, Babylon is a film that regrettably squanders much of its potential runtime with over-indulgence.”

Sidney is easily the most wasted character of all in Babylon, however, hands down. During a pivotal scene in his brief character arc, he arguably suffers the worst indignation of all of Babylon’s protagonists by being forced to make a near-impossible choice, and as a fellow POC I thought the impact would affect me far more than it actually did. But in the end, the power of that scene’s shock value quickly waned because up until that moment, Sidney’s rise to fame had been otherwise frictionless. In fact, the most extreme form of racism that he’d encountered on screen previously were the ignorant but mostly harmless questions from high-society types at parties.

Even when Sidney is asked to make the choice, the request comes directly from Manny, also a POC, who actually believes he is looking out for Sidney and the rest of his crew. When the facts are laid out it quickly becomes clear that for honorable people like them, there was never a real choice at all.

In the end, Babylon is a film that regrettably squanders much of its potential runtime with over-indulgence. There’s far too little character development, and too much of just about everything else, including an tediously overlong, highly unnecessary “diversion” in the third act involving Tobey Maguire, as well as celebratory ending montage that embarrassingly overreaches, drawing in footage not just from other films that directly inspired Babylon (e.g. Singing in the Rain), but also other iconic movies that have nothing to do with it at all (e.g. James Cameron’s Avatar).

The above would be far more forgivable if its characters were actually sympathetic and their actions matched their motivations. There’s no mistaking that Brad, Margot, Diego, Li Jun, Jovan are all beautiful and immensely talented people that can easily carry a film, but if the audience can’t relate with them, then it’s all BABEL.

Babylon is a film that simultaneously unmasks, admonishes and celebrates the unbridled excess and depravity of 1920’s Hollywood, but gets far too caught up in creating shock value and spectacle and neglects the potential of what should be its biggest draw: Its characters.
REVIEW SCORE
7
File Under: Babylon, Brad Pitt, Margot Robbie