All perfect webs and no loose threads. 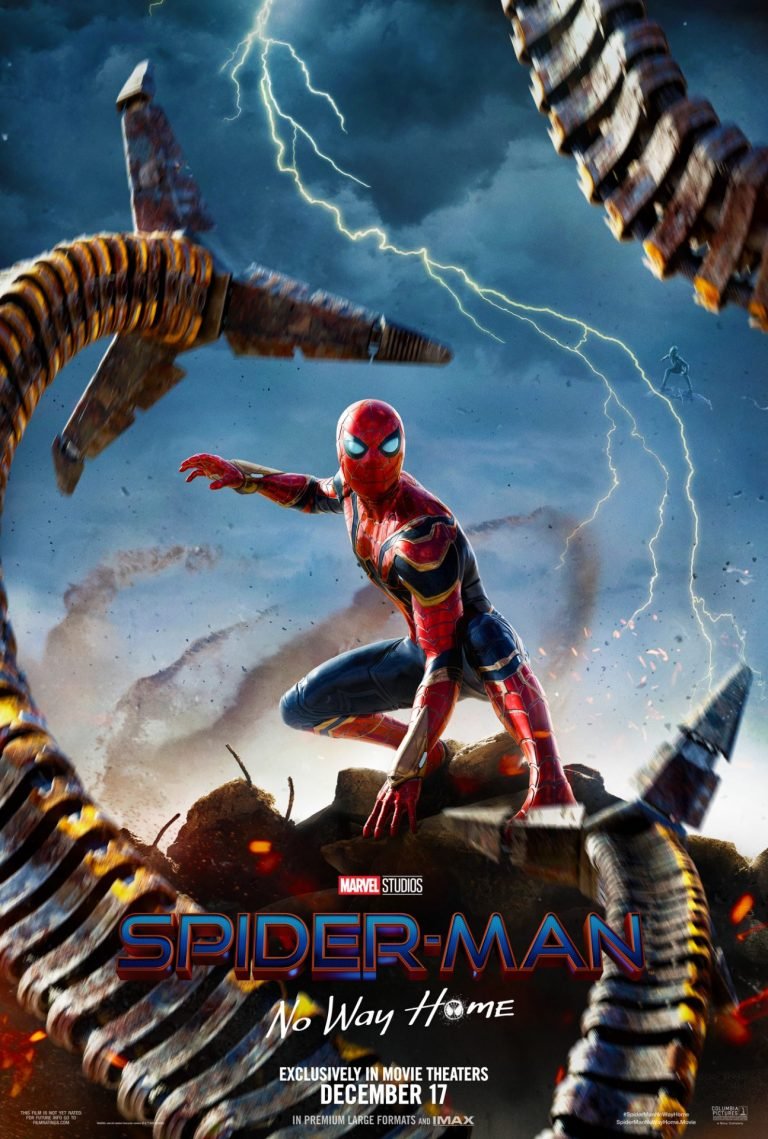 Spider-Man: No Way Home is one of the greatest films based on the iconic superhero. I go in without reservations – or spoilers – on what makes this latest Marvel flick such a blast. While Marvel sings a swan song for Peter Parker’s latest chapter in the bigger universe.

Obviously, Parker’s life is in shambles. His identity is revealed by Mysterio, who frames Spider-Man for the events of Far From Home. It’s hardly a homecoming for Peter, who wants nothing more than a rewind. Tom Holland undergoes an interesting career transformation back as a teenager. Despite him playing a few older roles in Cherry, The Devil All the Time and Chaos Walking. We see some of this maturity play nicely into Peter’s own arc in No Way Home.

Brilliantly, No Way Home is framed as a dysfunctional coming of age story. Things go bad at the worst time, just as Parker finishes up high school. As audiences saw Parker go through the teenage stages across the MCU, it comes full circle through newer experiences. Gone is the “grounded” approach from the previous two films. Here, audiences see Spidey tackle an Avengers-level threat. Just as No Way Home throws more than enough threats for one hero to handle. Seeing how Parker’s friends and acquaintances handle the news is absolutely priceless. While sending Parker deeper into his own rabbit hole. Marvel flexes its storytelling muscles from Shang-Chi. In the sense that No Way Home feels like a brand-new origin story. This effectively develops a better version of the Parker we knew from Homecoming and Far From Home. Viewers might notice some big changes to Parker’s life by the time No Way Home’s credits roll. For better or for worse.

Two years since audiences freaked out at Far From Home’s post-credits, Marvel has plenty of power and responsibility. Thankfully, director Jon Watts has control and creative freedom over the narrative. Viewers are slowly and gently eased through the fallout of being exposed. There’s plenty of reactions to be had across the first ten minutes of No Way Home. While the film rightfully pokes fun in the face of danger. No Way Home veers hard from dryer humour. Instead, returning to Spider-Man’s own brand of situational quips. Which especially counts as the stakes get higher.

It’s worth noting that Watts has taken considerable steps to preserve the MCU. Then pulling a few strings to surprise viewers (again, my mouth is shut). There is a healthy amount of Easter eggs and fan service to remind viewers there’s more to come. But No Way Home doesn’t fall into sequel-setup clichés across the two and a half hour runtime. Watts uses Homecoming and Far From Home as strong foundations to push things along. All without letting the film’s surprises take attention away from previous characters. Jacob Batalon’s Ned Leeds, Zendaya’s M.J. and Marisa Tomei’s Aunt May all return. Together, they each have chemistry. Then it picks up Far From Home’s slack seamlessly. No Way Home — in many ways — flips the switch around those who need saving. With this iteration of Spider-Man lucky enough to have more friends and family to count on. As the story ups the stakes, each supporting character is used to every advantage.

No Way Home masterfully balances Parker’s two lives. Watts manages to capture Lee’s vision for a great Spider-Man, but a less fortunate Parker. It’s no surprise viewers will get to see some incredible action through Spider-Man. But the third film is surprisingly Spidey’s most personal and human story yet. It’s an effect I first noticed in 2004’s Spider-Man 2, as Parker was struggling with growing pains. At the time, director Sam Raimi captured the inner realities of being a part-time hero. First, by protecting a city with webs. Then tackling real-world problems that can’t be solved using superpowers. No Way Home brings this element back with Parker’s coming of age. The film reflects what’s familiar, like preserving friendships after high school. When No Way Home dives into the unknown, viewers are just as taken back as Parker.

Preserving those spoilers, it’s easy to remember No Way Home for its villains. The trailer showed a variety of familiar faces. Marvel clearly didn’t hold back by bringing Doctor Octopus (Alfred Molina), Green Goblin (Willem Dafoe), Electro (Jamie Foxx) and Lizard (Rhys Ifans) back into the fold. No Way Home shows plenty of respect to its source material. If it’s not broken, don’t fix it. This storytelling philosophy runs deep with No Way Home. Marvel chooses not to reinvent things any more than they should. It’s a level of restraint that avoids tacked-on fan service. Each villain — like Parker’s companions — is used interestingly to keep the story moving.  For the record, civilians aren’t surprised at No Way Home‘s super powered cast. It’s comedy gold.

The villains in No Way Home bring plenty of baggage with them to Marvel’s larger universe. Their motivations across the previous films are intact. But Watts captures a bit more of Stan Lee’s vision by humanizing each one in the process. The film does a great job of questioning Parker’s wholesomeness. Each baddie also interacts with Spidey differently. No Way Home’s adequate pacing gives every villain their due. Along with some hilarious chemistry between each sinister lead. There’s no doubt each villain comes from a more serious timeline. Something the MCU isn’t afraid to poke fun at. Even if every villain starts to squirm in caricatures of their own making.

Tom Holland shares the best chemistry with Molina. Followed by Dafoe and Foxx. I would have loved to see more development with Ifan’s Lizard. But his own arc across No Way Home didn’t feel emphasized enough following the events of The Amazing Spider-Man. Instead, viewers see a more reserved and tacked-on version of the character. The same went for Sandman (Thomas Haden Church), who viewers sympathized with in Spider-Man 3. But Flint Marko barely softens up as Peter meets him. This is where he falls into a similar trap as the Lizard. Talking with heavy-hitting punches instead of relatable motivations.

For the best viewing, I recommend watching every franchise film to date. But only paying attention to the villains. No Way Home paints each villain as human. Something that develops as Holland’s Parker starts to understand each one along his journey.

Despite the overload of villains, No Way Home manages to accomplish what The Amazing Spider-Man 2 didn’t through quantity. Watt’s direction and steady pacing satisfies viewers without overwhelming them. Like coming face-to-face with a long lost friend, viewers might not blink in these scenes. Personality aside, No Way Home features plenty of action and web-slinging. Fans will be especially satisfied when Spidey clashes with each villain. There’s a refreshing dynamic from seeing Parker fight these iconic characters for the first time. Though each villain is more experienced, No Way Home gives audiences non-stop thrills. Benefitting Marvel’s storytelling, every fight has a heavy impact. So much that audiences could get their excitement tested to emotional degrees.

The climax touches more on Doctor Strange’s presence in No Way Home. He’s no Tony Stark. But carries a zero-tolerance for adventure post-Endgame. Clearly, Benedict Cumberbatch’s character casts a simple spell that’s quite unbreakable. Until Parker helps cause a multi-dimensional event that brings the villains in. It doesn’t go without saying that Strange is integral to the beginning and end of No Way Home. But the film knows just how powerful he is. So much that he takes a back seat in a cleverly made sequence. No Way Home knows when to keep Strange from overstaying his welcome. While seeing the Sorcerer Supreme interact with other villains is equally priceless.

Minor character nitpicks aren’t enough to lower the bar. In fact, it might be a while until Marvel tops No Way Home. Somehow, the studio celebrates Spider-Man’s best qualities without compromising. Watts and other producers pull out all the stops in creating an impactful entry into the series. This is the closest thing to a closure viewers will get from two cliffhanging iterations of the wall-crawler. In the process, Spider-Man: No Way Home burrows deep into nostalgia while changing the way any film is presented.

Anything can happen in Peter Parker’s life. Just as Marvel intended.

Spider-Man: No Way Home doesn’t hold back in shaking up the MCU with lasting impact, even if it reminds audiences about what makes the wall-crawler so iconic.
REVIEW SCORE
10
File Under: Far From Home, Marvel, MCU, Movie Review, No Way Home, Spider-Man